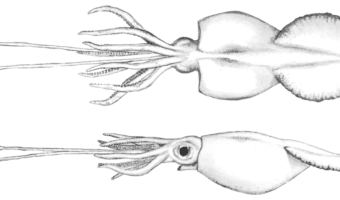 The colossal squid (Mesonychoteuthis hamiltoni), also known as the Antarctic squid or giant cranch squid, is a member of the family Cranchiidae and the only member of the genus Mesonychoteuthis. It inhabits the Southern Ocean and is believed to be the largest squid species in terms of mass, reaching at least 495 kilograms (1,091 lb).

The colossal squid is known only from a small number of specimens, and so little is actually known about this squid species. This is due to the fact they live deep in the ocean in freezing waters. We do know, however, that they have a similar appearance to other members of the Cranchiidae family, with hooks on their arms and tentacles.

The first report of a colossal squid was in 1925, when the head and arms were discovered in a sperm whale stomach. Since then, a total of only eight adult colossal squid have been reported, and six of those were remains recovered from the stomachs of caught whales.

Despite being difficult to catch for analysis, the colossal squid is not considered to be endangered and is actually listed as Least Concern on the IUCN Red List.

The colossal squid is the heaviest living invertebrate species, reaching weights up to 495 kg (1,091 lb). They may reach up to 14 m in length with a mantle length of 2 to 4 m. Unlike most squid species, it exhibits deep-sea gigantism, meaning it is extremely large for its surroundings.

The colossal squid has eight arms and a pair of long tentacles just like other squid species, but 25 rotating hooks that are aligned in two rows at the ends of their tentacles, which is unique to this species in the family Cranchiidae.

Their body is conical in shape and they have two broad fins that help them navigate through deep waters. The colossal squid also has the largest eyes documented in the animal kingdom, with an estimated diameter of 30 to 40 cm (12 to 16 in).

It is unclear how long the colossal squid lives for. However, they are considered gonochoric, meaning that they die shortly after breeding and mating.

The colossal squid is thought to feed on chaetognatha, large fish such as the Patagonian toothfish, and smaller squid. These animals do not need to eat very much; for example, one 5 kg toothfish may provide enough energy for a 500 kg squid to survive for up to 200 days. They are thought to be an ambush predator that depends on their hooks to catch prey, and are not thought to use a lot of energy chasing after prey.

These animals are thought to live a pretty slow paced life. They do not have many food requirements are live so deep that they escape most prey.

A colossal squid can swim at a speed of 20 mph (32 kmph). It is thought they don’t use extra energy chasing after prey and instead use their large eyes and excellent vision for visual predating.

The reproduction habits of the colossal squid are largely unknown, but we can make assumptions based on other squid species. All squid lay eggs. Some might lay single eggs while others lay clusters of eggs in a large jelly-like floating mass. Once the eggs are hatched, the babies can take between one to three years to become full-sized.

The colossal squid is found in the Southern Ocean from Antarctica to the southern tips of Africa, South America, and New Zealand. It is thought that they must inhabit depths of at least 2200 m, because they have been found in the stomachs of sperm whales.

Juvenile colossal squids, however, tend to live in the upper 1000 m of the ocean and have not been found below 1000 m. As the squid grows older it moves into deeper and darker waters, possibly to reduce the possibility of it being detected, and also to reduce predation pressure.

The colossal squid has rarely been documented, but it is not thought they are an endangered species. They are listed as Least Concern on the IUCN Red List.

Roughly 12 colossal squids were recorded up to the year 2015, but there could be many more as they are notoriously hard to trace.

Researchers believe that colossal squids are the primary food source for their predators, sperm whales. The discovery of colossal squid’s beaks found in the stomachs of many sperm whales has provided key evidence into the size, shape, and habitat of these adult squids.