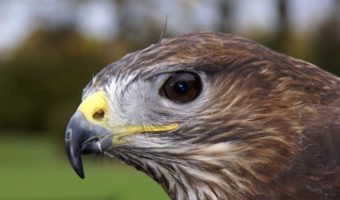 The Common Buzzard is a large bird of prey and one of the most visible of Britain’s raptors. The Common Buzzard has a large British population and can often be seen on a clear day out in the British countryside. It can be observed either sitting on a fence post awaiting its next meal to pass by or soaring swiftly in groups of two or more on the afternoon thermals.

Buzzards are to be found throughout much of the UK but are still best found in hilly terrain in the West of the UK, especially in areas with barren open ground. Some good places include Dartmoor and the Forest of Dean in Gloucestershire.

In Scotland, because of their size, behaviour and markings, the Common Buzzard is often mistaken for juvenile Golden Eagles, especially when they are soaring.

There are around 40,000 breeding pairs in Britain. The buzzard is usually resident all year except in the coldest parts of its range.

The Common Buzzard typically measures between 51 – 57 centimetres in length with a 110 to 130 centimetres (48 – 60 inches) wingspan . Females weigh as much as 1.3 kilograms. Males tend to weigh less and as such are the more efficient hunters and fliers. 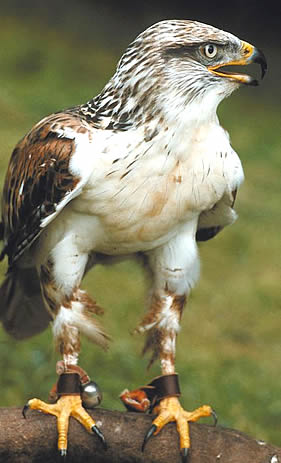 The Common Buzzards plumage is a rich brown, with lighter markings beneath. In flight the wings have a ragged, moth-like appearance as this bird glides to and fro at a tremendous height. The plumage can vary in Britain from almost pure white to black, however, it is usually shades of brown, with a white ‘necklace’ of feathers.

Common Buzzards feed mainly on Rabbits but will take just about any small mammal, reptile and often carrion (the carcass of a dead animal). The birds can occasionally be seen standing proudly on a piece of road kill defending it whilst they eat.

A great opportunist, it adapts well to a varied diet of pheasant, other small mammals, snakes and lizards and can often be seen walking over recently ploughed fields looking for worms and insects.

Common Buzzards do not normally form flocks, however, several may be seen together on migration or in good habitat. As many as 20 buzzards have been spotted in one small area, though usually an average of 30 metres apart from each other. Extremely territorial, fights do break out if one strays on another pairs territory.

Many smaller birds such as crows and Jackdaws see them as a threat and will pester them into moving from a particular tree or area by mobbing them repeatedly until they fly away.

Pairs mate for life. To attract a mate (or impress his existing mate) the male performs a ritual aerial display before the beginning of Spring. This spectacular display is known as ‘the roller coaster’. He will rise high up in the sky, to turn and plummet downward, in a spiral, twisting and turning as he comes down. He will then rise immediately upward to repeat the exercise.

The Common Buzzard breeds in woodland, usually on the fringes. The female lays between 2 and 4 eggs, sharing the 33 – 35 day job of incubation with the male bird. The young leave the nest after a couple of months, becoming fully independent at around 5 months, and becoming active breeders after 2 – 3 years.

Because of human persecution and the introduction of myxomatosis amongst the rabbit population in the 1950’s, buzzards became very scarce, only residing over high ground in the areas such as Brecon in Wales and the Cairngorms in Scotland. As the few surviving rabbits re-produced and became more resistant to the Myxomatosis virus, their numbers increased and with it the population and distribution of buzzards and other birds of prey. Their numbers are thought to be as high as 60,000 pairs throughout the UK, making them the most prevalent of UK birds of prey.