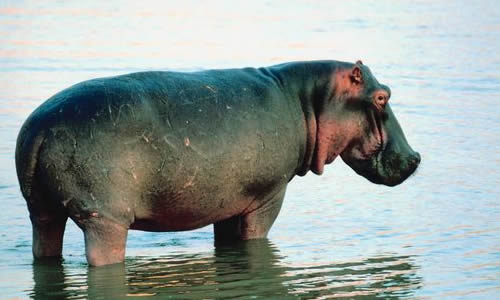 The Common Hippopotamus has a plump, bulky body which balances on four short stumpy legs. These ‘stumpy’ legs are quite versatile. Each hippo foot has 4 toes and although they are webbed, for water usage, they are evenly sprayed enough to support the hippo when it is on land.

A hippos skin is usually greyish-brown and is completely hairless, apart from a few bristles around its mouth and tail-end. Although the hippo has no sweat glands in the skin (like a pig), they have special glands that produce a red fluid. This red fluid protects their skin from the sun and from infections, although they do rely heavily on cool water and mud to prevent over-heating and dehydration. The production of this fluid increases rapidly when the hippo is excited.

The hippo has a head shaped like a huge muzzle (female heads are slightly smaller). A hippos small eyes, little ears and nostrils are placed high upon their heads – this enables the hippo to smell, see and breath while most of its body is submerged under the water. 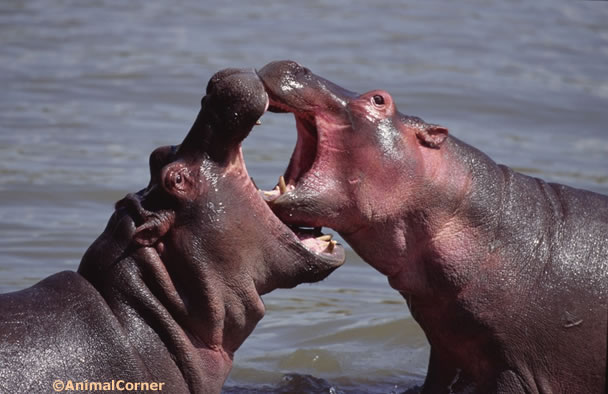 Although hippos cannot swim because their bodies are too dense to float, they spend most of the day in the water. Hippos can stay underneath the water for about 6 minutes at a time – to do this they take a deep breath and close off their ears and nostrils. As hippos cannot swim, they move around by pushing their feet off the riverbed and gallop around the bottom of the river in a surprisingly graceful style which could resemble a ballet dancer.

Hippo’s huge mouths consist of lips that are 2 feet wide and teeth that can bite a 10 foot crocodile in half. Hippos can open their mouths to a massive 150 degrees or 4 feet wide which show their large tusk-like canines and razor-sharp incisors, capable of biting a small boat in half. 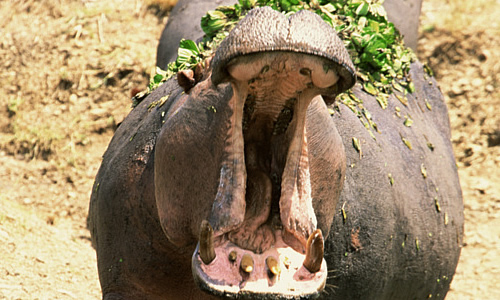 Believe it or not, these large, docile looking animals are actually very aggressive. Despite their size, hippos can out-run a human and can reach speeds of 30 miles per hour. Hippos have developed some well known rituals to show aggression – the large ‘yawn’ does not mean hippo is tired, it is one of their most aggressive forms and shows confrontation in the water. Basically, being unpredictable, anything that gets in their way will be bitten or trampled. 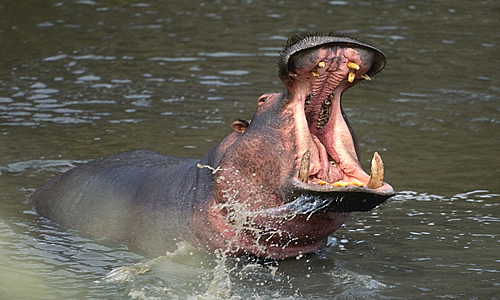 Here are some more common aggressive rituals of the Common Hippo:

Other sounds and actions displaying aggression are:

Male hippos also have a submissive behaviour – here are some examples:

Hippos are gregarious animals which means they move around in groups, enjoying company of others. Hippos live in herds of 10 – 40 individuals, however, herds of 100 or more hippos have been observed. The dominant male is the only one allowed to mate with the females of the herd, although sometimes he will allow a subordinate male to mate.

The dominant hippo males territory is well marked with his dung. The effective scent of the dung warns off other male hippos who might try and invade his territory. Sometimes fights can ensue when the territory is threatened by a rival hippo resulting in injury and sometimes death. 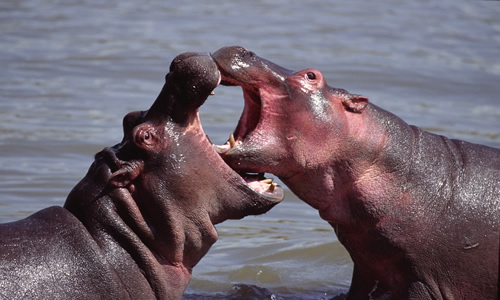 Hippos are not susceptible to disease therefore in suitable habitats and conditions their numbers can increase rapidly. A hippos only predators are other hippos and unfortunately human beings who hunt them for their hides, tusks and for meat.

The bellowing of a bull hippo measures an ear-splitting 115 decibels and sounds like the roar of a lion.

Although hippos have very sharp teeth and are very large animals, they are in fact herbivores which means they do not eat meat, only plants. Hippos may stay in the waters all day, however, at night they come out of the lakes, swamps and ponds and head for the grass to graze.

They are amazingly agile animals and good climbers for their size. At night they will climb steep banks to graze on grass. They can get through around 100 pounds of grass in one night. This grazing goes on for most of the night, then, before sunrise, they head back into the waters and swamps to digest their food and for another day of lazing beneath the waters surface.

Male hippos are about 7 years old and females about 9 years old when they become ready to mate. Hippo mating usually happens within the dry seasons when most of the hippos have congregated around water sources. Mating usually takes place under the water. The female hippo will carry her baby for about 240 days. When the time comes to give birth, she will separate from the herd and isolate herself. 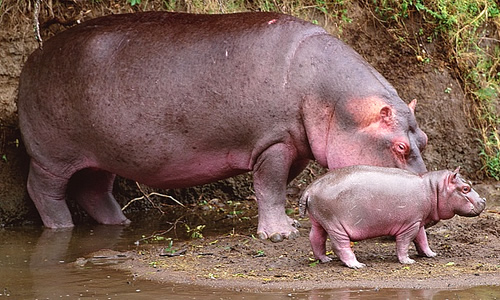 One single calf is born, usually underwater and mother and calf will stay together away from the herd for between 10 – 44 days. The mother hippo will nudge her calf to the surface of the water to catch its first breath and then the calf will take a breath, close its nostrils, fold its ears and submerge to nurse on its mother.

A female hippo will give birth to a single calf every two years. Calves are usually born in the rainy season and weigh about 93 pounds at birth. Calves will begin to eat grass at about 3 weeks old, however, it will continue to nurse from its mother for about a year. Serious grazing at night begins at around 5 months old. Calves stay close to their mothers for protection, not only from crocodiles and lions, but from male hippos who oddly enough do not bother with the calves on land but can attack young males in the water.

On land, the calves can also be trampled on by the male hippos during chasing, fighting and stampedes. If a male hippo comes near the young, a mother hippo will mob the male hippo who will then lay low and still to let her know he meant no harm. It is unsure why the male hippos attack the young male hippos, maybe because they are male and are seen as a threat. Most often, nurseries are developed containing many small calves who are protected by 1 – 7 cows while the other mothers go and graze.

Hippo populations across the continent are threatened by habitat loss and unregulated hunting. The hippopotamus has been moved on to the so-called Red List drawn up by the World Conservation Union (IUCN) in May 2006. This signifies that the common hippopotamus is now in serious danger of extinction.

The name 'hippopotamus' comes from the Greek word 'river horse'.Hippos can turn their ears in the same direction at the same time.Few animals can open their mouths as wide as a hippo can - they use this ability to scare away other animals.Around the 18th century, hippo tusks were used to make artificial teeth.When hippos fight, they toss water at each other, make a variety of sounds at each other and swing their massive heads at each other.Mother hippos have been known to kill lions and bite crocodiles in half in order to protect their young.A hippo has a three-chambered stomach: the parietal blind sac, the stomach and the glandular stomach.Hippos like to spend a lot of time bathing in the water to keep cool.