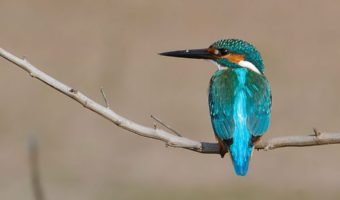 The Common Kingfisher (Alcedo atthis), is one of Britains most brightly coloured and interesting birds.

Kingfishers are widespread, especially in central and southern England, becoming less common further north, however, following some declines last century, they are currently increasing in their range in Scotland.

Kingfishers are found by still or slow flowing water such as lakes, canals and rivers in lowland areas. In winter, some individuals move to estuaries and the coast. Occasionally they may visit suitably sized garden ponds. 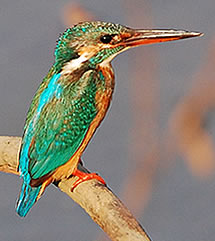 Common Kingfishers measure 17 – 19 centimetres in length, weigh between 34 – 46 grams and have a wingspan of 25 centimetres. Their beak is around 4 centimetres long and pointed. Kingfishers have short, orange coloured legs. Kingfishers are very brightly coloured. The colour of their wings is a blue/green colour and their upperparts, rump and tail are a bright blue colour. Their underparts are bright orange and they have a small, white bib underneath their beaks, on their throats.

The kingfishers head is blue with orange marks in front and behind the birds eyes and a white mark on each side of the head. These bright, beautiful colours are more apparent when the bird is in flight.

Male kingfishers and female kingfishers are are almost identical except for an orange colouration with a black tip on the lower part of the females beak/mandibles. Young kingfishers are similar to the adults in appearance, however, they have duller and greener upperparts, paler underparts, black beak and initially, black legs.

The Common kingfisher has no particular song, however, they vocalize using a shrill ‘tsee’ or ‘tsee-tsee’ call. Their flight call is a short sharp whistle, chee, repeated two or three times. Anxious birds emit a harsh, shrit-it-it and nestlings call for food with a churring noise.

In temperate regions, kingfishers inhabit clear, slow-flowing streams and rivers and lakes with well-vegetated banks. Kingfishers are often found in scrubs and bushes with overhanging branches close to shallow open water in which it hunts. In winter, the kingfisher is more coastal, often feeding in estuaries or harbours and along rocky seashores. 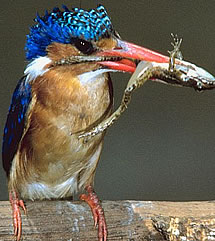 Kingfishers feed on aquatic insects such as dragonfly larvae and water beetles and small fish ranging from 1 inch to 5 inches long, such as sticklebacks, minnows, small roach and trout. About 60% of food items are fish. In winter, kingfishers feed up on crustaceans including freshwater shrimps. The Common Kingfisher hunts from a perch 1 – 2 metres (3 – 6 feet) above the water, on a branch, post or riverbank with its beak pointing downwards as it searches for prey.

The Kingfisher bird bobs its head when food is detected to gauge the distance and plunges steeply down to grab its prey usually no deeper than 25 centimetres (19 inches) below the surface of the water.

The wings are opened under water and the open eyes are protected by the transparent third eyelid. The bird rises beak-first from the surface and flies back to its perch. At the perch the fish is adjusted until it is held near its tail and beaten against the perch several times. Once dead, the fish is swallowed head-first. A few times each day, a small greyish pellet of fish bones and other indigestible remains is regurgitated.

Like all kingfishers, the Common Kingfisher is highly territorial. Since it must eat around 60% of its body weight each day, it is essential to have control over a suitable stretch of river. It is solitary for most of the year, roosting alone in heavy cover. If another kingfisher enters its territory, both birds ‘display’ from perches and fights may occur. One bird will grab the others beak and try to hold it under water. Pairs form in the autumn but each bird retains a separate territory, generally at least 1 kilometre long.

Kingfisher courtship occurs in spring. The male will approach the female with a fish in his beak. He will hold it so that the head of the fish is facing outwards and attempt to feed it to the female. If he is unsuccessful he will simply eat the fish himself. He may have to repeat this feeding behaviour for some time before mating occurs. Kingfishers make burrows in sandy riverbanks. The burrow consists of a horizontal tunnel with a nesting chamber at the end and are usually about a metre long.

The female lays about 5 or 7 white, glossy eggs but sometimes will lay up to 10 eggs. The eggs average 1.9 centimetres in breadth, 2.2 centimetres in length and weigh about 4.3 grams, of which 50% is shell. The male and the female share the job of incubating the eggs for about 20 days. Both incubate by day, however, only the female kingfisher incubates by night. The eggs hatch in 19 – 20 days and the young remain in the nest for a further 24 – 25 days, sometimes longer. Once large enough, young birds will come to the burrow entrance to be fed. Two to three broods may be reared in a season.

During the breeding season, kingfishers can often be seen hunting around the deep pools that form in the bends of rivers. These locations are rich in the young fish that the kingfishers feed to their young. A hungry brood of a Kingfisher can demand over 100 fish a day from their parents.

The early days for the young kingfishers are the most dangerous. About four days after leaving the nests, the fledglings will take their first dives into the water to find prey. Unfortunately, those who will not have learned how to fish by this time may become waterlogged and drown. About only half survive more than a week or two.

Very few birds live longer than one breeding season. The oldest kingfisher on record was 21 years of age.