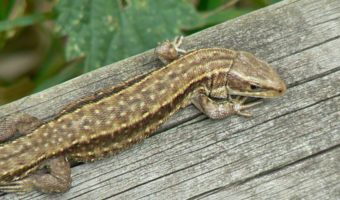 The Common Lizard (Lacerta vivipara), also known as the viviparous lizard, is a Eurasian lizard. It lives farther north than any other reptile species. It ranges across central and northern Europe and through to northern Asia, being the most common lizard in Northern regions (they are absent from the Mediterranean area and the area surrounding the Black Sea). Common lizards are also the only reptile found in Ireland.

The common or viviparous lizard is one of three species of wild lizard found in the UK. The others are the endangered sand lizard and the slow-worm, a legless lizard.

Common lizards have long bodies which measure around 10 – 16 centimetres in length and they have short legs. Their tail is quite thick and up to twice the length of the body. They have small, roundish heads and thick necks. 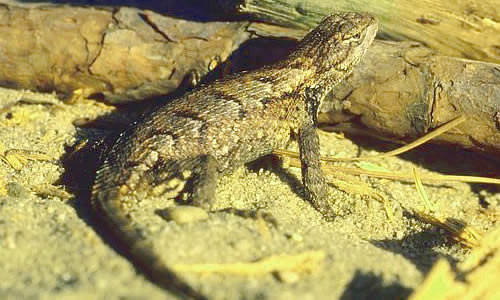 Males have more slender bodies than females. The color and patterning of this species is remarkably variable.

Their skin has coarse scales which range from grey, brown, bronze or olive green on the back and males are generally darker than females. They have a series of white spots down the flanks, which fuse to form a line and a black line along the back. Common lizards also have numerous black spots scattered over the body. Males have orange/yellow bellies with black spots and females have cream/white bellies. Females may have dark stripes on their flanks and down the middle of the back. Sometimes females also have light-colored stripes, or dark and light spots along the sides of the back. The Common lizards throat is white, sometimes blue.

Common lizards are found in a range of habitats including meadows, woodland, marshes, swamps, damp forests, heathland, moors, sand dunes, hedgerows, bogs and rubbish dumps. Common lizards live mainly on the ground, although they may climb onto rocks, logs and low-growing vegetation.

The Common lizard feeds on invertebrates, mostly small insects, spiders and small snails. The lizard shakes its prey in its jaws before chewing it and swallowing it whole. This lizard hunts during the day, using sight and scent.

All lizards are ectothermic, which means they need heat from their surroundings to raise their body temperature. Our winter is too cold for them, so they will hibernate generally from October to March. They will often hibernate in groups and sometimes emerge for a brief time during warm spells. In early spring, late autumn and cool summer days the lizards bask in the sun to reach their optimum body temperature, which is about 30°C. Common lizards are good swimmers and will dive underwater when threatened.

After emerging from hibernation, the males defend breeding territories from other males. The Common lizard mates in April or May. Males take females in their jaws before mating. If the female is not interested, she will bite the male fiercely. The name of the species is derived from its ability to give birth to live young, an adaptation to a cool climate – but some southern populations are oviparous (egg-laying). The young develop for approximately three months inside the female. The 3 – 10 young (or eggs) are usually produced in July. The young are black in color and measure about 3 centimetres and when first born are surrounded by egg membrane, from which they break free after about a day. Males reach sexual maturity at two years old, females at three years old.

The Common Lizards life span is around 5 – 6 years.

Common lizards are widespread and are not considered to be endangered. Their status with the IUCN is ‘Least Concern’.