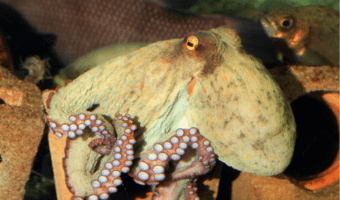 The common octopus (scientific name: Octopus vulgaris) is a mollusk belonging to the class Cephalopoda, the family Octopodidae and the genus Octopus. It is the most studied of all the octopus species.

The common octopus is most famous for its eight legs. It is a cosmopolitan species and occurs all over the world, particularly abundant in the Mediterranean Sea, the Eastern Atlantic Ocean, and in Japanese waters.

These animals are quite large, and their tentacles can measure up to 1 m (3.3 feet) long. They hunt at dusk and mostly eat crabs, crayfish, and bivalve molluscs. They are able to change their color to blend in with their surroundings and can even adjust their shape to escape predators.

The common octopus is considered to be abundant across their range, and are currently listed as Least Concern on the IUCN Red List. 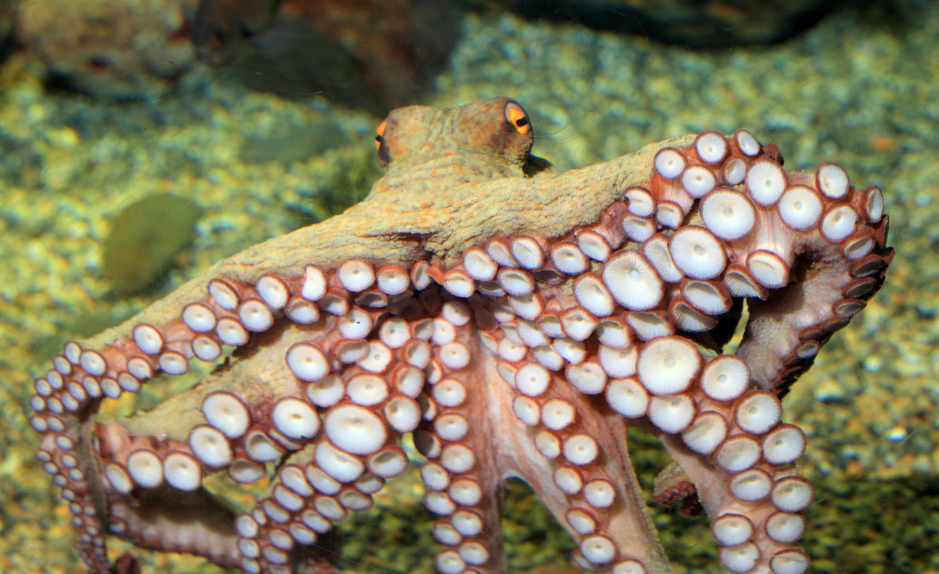 The common octopus has a distinct appearance, with a large bulbous head, large eyes, and eight distinctive arms. They can grow up to 25 cm (10 inches) in mantle length with arms up to 1 m (3.3 feet) long, and may weigh up to 9 kg (20 pounds).

They have no skeletal structure but do possess a skull, which protects their brain. They also have a sharp beak and a toothed tongue called a radula, which they use to pry open and drill into the shells of prey, like crabs and clams. Once they break into the shells, they may also inject a paralyzing poison into its prey.

They are about 90 percent muscle, and because they lack bones, they can fit through very small spaces. Their soft body is moldable and they can squeeze into many cracks and crevices to get away from threats and predators without harming themselves. They are usually brown in color, but can change their color to camouflage agains their surroundings or to show their mood.

Common octopuses have nine brains. In addition to a central brain located between the eyes, octopuses have separate “mini-brains” at the base of each of their eight tentacles. There are around 500 million neurons across an octopuses entire body, with around 40 million in each arm. Because each arm has a mini-brain, each arm can act independently of an octopus’s central brain and other arms. Typically, each arm has roughly 250 suckers. Each sucker may have around 10,000 neurons.

These mini-brains help to make up for the fact that octopuses don’t have proprioception. This means that they don’t have a fixed “map” in their minds allowing them to know what various parts of their bodies are doing. Unlike humans, octopuses don’t maintain a static body shape. Instead, their bodies are remarkably fluid, constantly changing to adapt to the environment.

All Heart And Brains

Thanks to their mini-brains, octopuses can react faster to threats because individual ganglia don’t have to communicate with the central brain. They can also regenerate new arms if one is severed.

One of the most unique traits about the common octopus is the fact that it has three hearts. It has one main two-chambered heart and two smaller branchial hearts, one next to each set of gills. Their two peripheral hearts pump blood through the gills, where it picks up oxygen. A central heart then circulates the oxygenated blood to the rest of the body to provide energy for organs and muscles.

Just like other cephalopods squids, cuttlefish and nautiluses, the octopuses have blue blood, because they use a copper-rich protein called haemocyanin to transport oxygen. This is much larger than haemoglobin and circulates in the blood plasma. Haemocyanin is less efficient at binding with oxygen than haemoglobin. However, octopuses compensate for this by having three hearts – two “branchial” hearts, which receive deoxygenated blood from around the body and pump it through the gills, and one “systemic” heart, which takes that oxygen-rich blood, increases its pressure and then circulates it around the rest of the body.

The common octopus uses gills to breathe. The gills allow them to breathe in oxygen and then exhale through a tube called a siphon. If an octopus breathes fast and exhales hard, it can swim backward by jet propulsion. 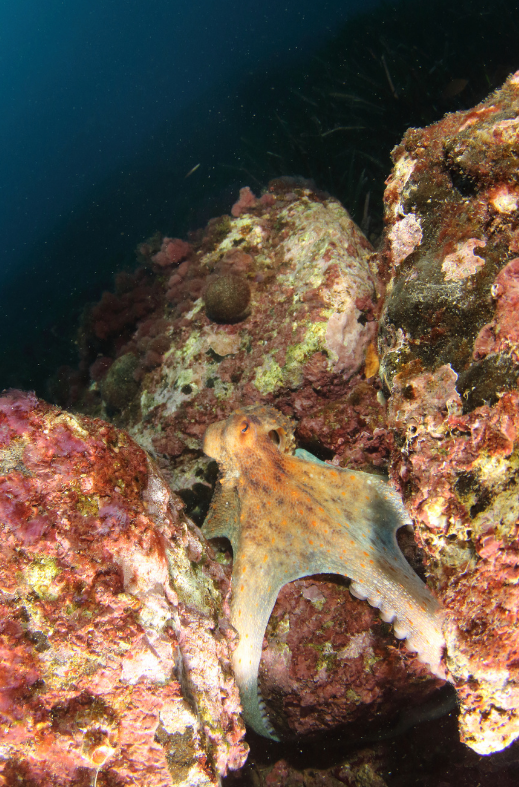 The common octopus has a short lifespan, of between one and two years.

The common octopus prefers to eat crabs, clams, snails, small fishes, but will actually eat any crustaceans they can catch and will even eat other octopuses. They use their color changing abilities to hide from their prey and will jump out and catch them.

Octopuses use their radula to pry open and drill into the shells of prey. Once they break into the shells, they may also inject a paralyzing poison to kill the prey before eating it.

The common octopus is a solitary animal that spends most of its time alone in its home. They leave only to hunt for food and to reproduce. They are nocturnal and typically hunt at night.

Their preferred mode of movement is to crawl along the seabed. They can also swim at high speeds, propelled by jets of water, which they shoot out of a tube called a siphon. However, when they are swimming, the systemic heart does not beat, so they tire easily.

When threatened by prey, the octopus will release a cloud of black ink to obscure its attacker’s view, giving it time to swim away. The ink even contains a substance that dulls a predator’s sense of smell, making the fleeing octopus harder to track.

The octopus may also adopt deflective markings to scare away potential predators. The areas around the eyes, suckers, arms, and web may darken so the octopus appears more threatening. Their coloration also reflects their mood. While their pigmentation is normally brown, octopuses may turn white, which shows fear, or red, which demonstrates anger. In addition to changing color, they also adapt the texture of their skin and their body posture to blend in seamlessly with their surroundings.

In early spring, octopuses move closer to the shore to mate. The male initiates mating by approaching the female. She will fend him off for a while, but then accepts him. The male has a specialized tip at the end of one arm that transfers sperm to the female’s oviduct. The male dies soon after mating.

After copulation, the female will look for a suitable den site and lays the eggs, attached in chains, to the rock or coral of a den. The eggs are laid in shallow water and are always attached to a substrate. The total number of eggs laid by a female varies from 100,000 to 500,000.

As soon as they hatch, the young are able to swim, eat, and produce ink. The hatchlings are carried by the currents, and they feed on plankton for 45-60 days. Only one or two of the hatchlings will survive to adulthood.

The common octopus is found all over the world, and is particularly abundant in the Mediterranean Sea, the Eastern Atlantic Ocean, and in Japanese waters. They are found in tropical, subtropical and temperate waters and are benthic, preferring the floor of relatively shallow, rocky, coastal waters, often no deeper than 200 m (660 feet).

The temperature of the water in which they reside can vary, but the preferred temperature is about 15 to 16 °C (59 to 61 °F). In warmer weather, the octopus can be found deeper in the ocean than usual to escape the warm water.

The common octopus spends most of its time in their homes, usually a hole, a crevice or sheltered place which they often protect with shells, stones, and other solid objects they gather. However, they will also swim throughout the water, exposing themselves completely. To do this, they use a jet mechanism that involves creating a much higher pressure in their mantle cavity that allows them to propel themselves through the water.

The common octopus is not currently considered to be endangered and is listed as Least Concern on the IUCN Red List.

However, octopus is a common food in Asian and Mediterranean cuisines. People catch octopuses by trawling (fishing with a large net) and by luring them into “octopus pots,” which are plastic traps that octopuses confuse as suitable dens. In the future, overfishing as a result of commercial fishing of octopuses could cause a decline in their population.

The biggest predators of the common octopus are moray eels, fish, seals, sperm whales, sea otters, and birds. They can evade predators by changing their color to camouflage themselves, squeezing into cracks to hide, darkening their coloration to appear more threatening and using black ink to obscure their predator’s vision so they can swim away.

How many hearts does an octopus have?

The common octopus has three hearts. Two peripheral hearts pump blood through the gills, where it picks up oxygen, and a central heart then circulates the oxygenated blood to the rest of the body to provide energy for organs and muscles.

How long do octopus live?

An octopus usually lives for between one and two years.

What does an octopus eat?

How many brains does an octopus have?

An octopus has a staggering nine brains! In addition to the central brain, each of the 8 arms has a mini-brain that allows it to act independently.