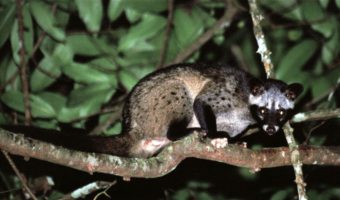 The Common Palm Civet (Paradoxurus hermaphroditus), also known as the’ Asian Palm Civet’ ‘Musang’ or the ‘Toddy Cat’, is a cat-sized mammal that resides in the Southeast Asian tropical rainforests. The Common Palm Civet is found from the Himalayas and southern China, to the Philippines, the Malay peninsula and the Indonesian islands.

The Common Palm Civet is a highly adaptive animal and can live in dense forests, agricultural areas and even alongside humans. 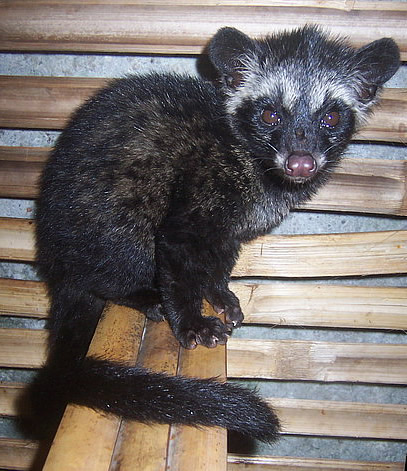 The markings on its face resemble a raccoons facial markings. Its tail does not have rings, unlike similar palm civet species. The Common Palm Civet has sharp claws which allow it to climb trees and house gutters.

The Common Palm Civet is a nocturnal omnivore. Its primary food source is fruit such as chiku (from a long-lived, evergreen tree native to the New World tropics), mango (a tropical fruit of the mango tree) and rambutan (a medium-sized tropical tree). It also has a fondness for palm flower sap which, when fermented, becomes ‘toddy’, a sweet liquor.

The Common Palm Civet is also fond of coffee cherries. They eat the outer fruit and the coffee beans pass through their digestive tract. An expensive coffee called ‘kopi luwak’ is supposedly made from these coffee beans. Kopi luwak is said to have a gamy flavour and sells for more than $100 per pound.

Common Palm Civets reproduce throughout the year although it has been recorded that kittens are most often seen from October to December. Kittens are born in a litter of 2 to 5 young. Palm civets become sexually mature at 11 to 12 months. In captivity the common palm civet can live up to 22 years.

Young are born in tree hollows or in boulder crevices. During brief periods of mating and when the females have their young, the civets occupy resting trees together.

Common Palm Civets forage mainly at night. The likelihood of encountering predators during the day may have favoured nocturnal foraging behaviour. The activity period, from around 6pm in the evening to 4am in the morning, is influenced by daylight. Palm civets become active only after dark and retreat to rest sites just before dawn.

When foraging in the same area, civets repeatedly use the same resting trees. Resting trees with vines and holes are preferred by the civets and are used for several consecutive days.

In Sri Lanka, the palm civet is known as ‘Uguduwa’ by the Sinhala speaking community. In most parts of the island, the civets become a menace to the people due to fact that it litters in ceilings and attics of common households and then makes loud noises at night disturbing the sleep of the inhabitants of the house (noises are mostly due to their movements and fights).

Common Palm Civets are classed as ‘Least Concern’. It is plentiful in its natural range and is not endangered.