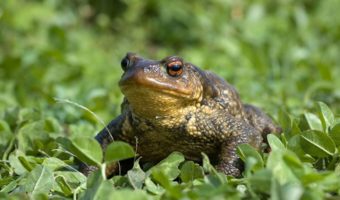 The Common Toad (Bufo bufo) is also known as the European Toad. Common toads are widespread in mainland Britain, mainly England, Scotland and Wales, however, they are absent from Ireland. Common Toads can also be found over most of Europe, northwest Africa and Asia. Common Toads are Britains largest and heaviest amphibians. 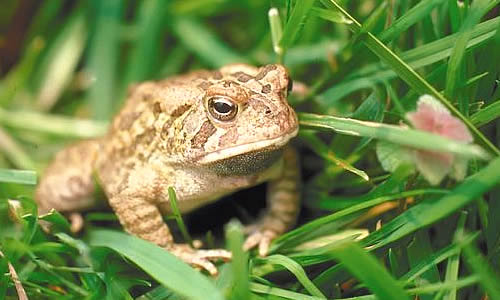 Common toads live in a wide range of habitats, however, they are usually found in damp places. Being creatures of habit, you can often find them in the same place, time after time, however, because they are able to blend in with their background and remain motionless for hours at a time, they can be difficult to spot.

Common Toads eat invertebrates such as insects, larvae, spiders, slugs and worms, which they catch on their sticky, prehensile tongues. Larger toads may also take slow worms, small grass snakes and harvest mice, which are swallowed alive. Toads generally hunt at night and are most active in wet weather.

Common toads are solitary, except during the breeding season. They excavate a shallow burrow, which they return to after foraging for prey. They are nocturnal and shelter under tree roots, stones and vegetation during the day. They shed their skin regularly and often eat the sloughed skin. Contrary to popular belief, they tend to walk rather than hop. Common toads hibernate in October, typically under deep leaf litter, logs, timber piles, or in burrows and drainpipes. They will occasionally hibernate in mud at the bottom of a pond, but tend to live away from water except during the breeding season. They emerge from hibernation in spring (late March) and migrate to breeding sites.

As a defence against predators they secrete a toxic, foul tasting substance called ‘bufagin’. This is enough to deter many predators although Grass Snakes and hedgehogs are immune. As well as having an unpleasant taste, common toads also adopt a defence posture when threatened that makes them appear much larger than usual and so deters predators. They do this by stretching out their legs, inflating their lungs with air so their body becomes inflated and position their heads downwards. This makes them more difficult to grasp and swallow by a predator.

Although the adults spend most of their time on land, the females enter ponds and other still waters to lay their eggs, toad spawn, which can be distinguished from the spawn of the common frog as it forms strings rather than a large mass of eggs. Although males usually wait for females at breeding sites, they will sometimes try to ambush them before they reach the water. Males clamber onto the backs of females and hold onto them tightly (a posture known as amplexus), the nuptial pads on their fingers providing extra grip. Over-eager males sometimes grab another male, however, the captured males croak soon informs them of their mistake.

Common toads spawn amongst waterweed. The female toad releases long strings of triple-stranded eggs, which the male on her back fertilises with sperm. About 600 – 4000 eggs are laid. These strings become twisted and stretched around waterweed and vegetation so that the eggs settle into two strands. A few days later the adults leave the water. The tadpoles hatch within 10 days and despite being distasteful to most predators, the majority will not reach adulthood. The tadpoles metamorphose into toadlets within 2 – 3 months – varying according to food availability and water temperature. The young tadpoles resemble other tadpoles in their appearance except that toad tadpoles have a larger, rounder blacker head and shorter tail. They leave the water in May. Common toads reach sexual maturity at 4 years of age. The life span of a Common Toad in captivity may be as high as 20 – 40 years, however, in the wild, it is more likely to be 10 – 12 years.

Common toads are not listed by the IUCN. Sadly, in their desperate bid for breeding sites, many toads are run over by traffic – 20 tons are killed annually on British roads alone. Tunnels under the road are an effective way of reducing this toll.