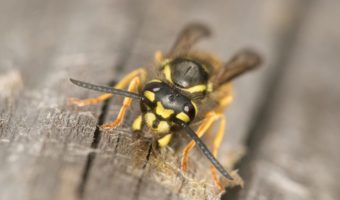 The Common Wasp has a yellow head with a black top, a black thorax with yellow on its sides, a yellow abdomen with black bands, black antennae and yellow legs. The common wasp grows up to 19 millimetres long. The Common wasp can be found in gardens, woodlands and meadows. Common wasps live in nests that contain up to 10,000 workers. They build their nests in the ground which is made of paper.

The paper is made by the wasps – they chew small amounts of wood which they get from trees and garden fences, mix it with their saliva to form a pulp and add it to the nest in thin strips. Common wasps do not make their own burrows for their nests, instead they will find an abandoned rodent burrow, a garden shed or an attic in a house. 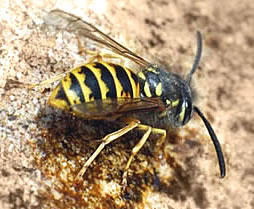 Mating takes place between young queens and drones inside the nest. At the end of Autumn, the nest dies off and the only ones left are the fertilized queens.

The queens find a safe place to hibernate through the winter (sometimes it is not uncommon to find them in the folds of curtains in your home).

In late spring the queen will emerge from hibernation and begin searching for a suitable nesting site.

When she has found one, she starts building a small paper nest into which she begins to lay eggs. The eggs hatch out into sterile females called workers. These workers then take over the job of nest building and larvae feeding and the queen continues to lay eggs.

Towards the end of the summer the queen lays some more eggs which produce male wasps, called drones and also fertile females which will be the queens of next years nests. These swarm out of the colony and mate.

The males die shortly after mating with the new potential queens and the lifecycle starts again.