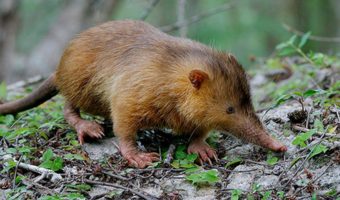 Three Cuban Solenodons were captured in 1974 and 1975 and research revealed that it still existed in many places at the eastern end of Cuba. However, the Cuban Solenodon is still very rare. Prior to 2003, the most recent sighting was in 1999 mainly because it is a nocturnal burrower, living underground and it is very rarely seen.

The Cuban Solenodon has small eyes and dark brown to black hair. It is sometimes compared to a shrew, although it most closely resembles members of the family Tenrecidae including hedgehogs, shrews, opossums, mice and even otters.

The Cuban Solenodon is found in dense, humid forests and brush country, as well as around plantations.

The Cuban Solenodon is an insectivore and emerges from rocks and hollow logs at night to prey on insects, spiders and lizards.

The Cuban solenodon is mainly nocturnal, hiding during the day in rock clefts, hollow trees, or burrows which it excavates itself. The Cuban Solenodons obtain food by rooting in the ground with their snouts and by tearing into rotten logs and trees with their fore claws.

The Cuban Solenodons have a long life span and low reproductive rate, as a result of having been among the dominant predators before Europeans colonized the New World.

Cuban Solenodons have venomous bites. The venom is delivered from modified salivary glands via grooves in their second lower incisors.

Although the Cuban Solenodon is not yet extinct, it is still an endangered species because it only breeds a single litter of one to three in a year and because of predation by species that were introduced by humans.