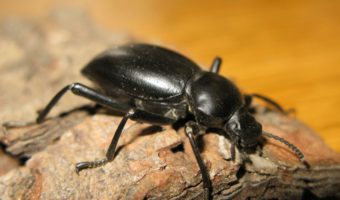 Darkling Beetles belong to the family Tenebrionidae. They are a family of beetles found worldwide, estimated at more than 20,000 species.

Many of the beetles have black elytra. Darkling beetles eat both fresh and decaying vegetation. Major predators include birds, rodents and lizards.

The larval stages of several species are cultured as feeder insects for captive insectivores and include the very commonly known ‘mealworms’ and ‘superworms’ and the lesser-known ‘mini mealworms’.

Some species of Darkling Beetles live in the dry Namib desert and have evolved modification that help them collect water from the fog that condenses on their elytra. Raising darkling beetles from larvae through adulthood can be a rewarding biology project for lower school educators.

Mealworms are commonly used as feed for reptiles, fish and birds and are so easy to find from supply companies.

Mealworms can be grown in a wooden box or box eight to ten inches deep. They grow best in a container with large surface areas. The sides should be smooth to prevent them from escaping. The mealworms are mostly nocturnal and prefer a dark environment. Some sand may be provided at the bottom.

The food for the larvae can be flour or cereals. The temperature should be even and the box well ventilated. Some moisture can be provided by way of fruits or vegetable matter. The rearing trays are best left undisturbed. Another tray should then be provided, prepared with the same food mixture as in the first. The adults should be placed in this tray to lay eggs for more young worms. As soon as these young worms have grown sufficiently to be handled they should be put in the first tray and allowed to grow as large as desired. By using a two tray system, one should be able to provide a continuous supply of worms.