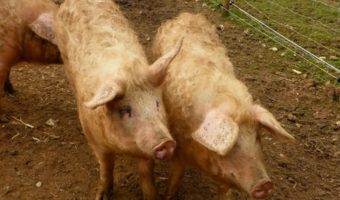 The domestic pig is farmed for its meat called pork. Products made of pork include sausage, bacon and ham. The head of a pig can be used to make head cheese. Head Cheese is not a cheese, but rather a sort of meat known as a ‘terrine’ of meat from the head of a calf or pig (sometimes a sheep or cow) that would not otherwise be considered appealing.

A ‘terrine’ is a substance meat is prepared in, mainly game and venison. If pressed and chilled and turned out in slices, it becomes a pate.

Head Cheese may also include meat from the feet and heart. It is usually eaten cold or at room temperature as a luncheon meat. It is sometimes also known as soucemeat, particularly if pickled with vinegar. 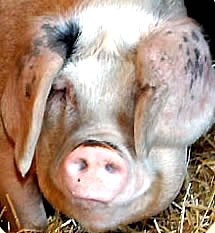 Liver, chitterlings and other offal from pigs are also widely used for food. In industrialized nations, domestic pigs farming has shifted away from the traditional pig farm to large-scale intensive pig farms where meat can be mass-produced. This has resulted in lower production costs, however, more significant animal welfare concerns. In developing nations and some parts of developed nations, the domestic pig is frequently raised outdoors in yards.

In some cases pigs are even raised in open fields where they are allowed to forage; they are watched by swineherds, essentially shepherds for pigs.

Pigs are known to be intelligent animals and have been found to be more trainable than dogs or cats. Asian pot-bellied pigs, a smaller subspecies of the domestic pig, have made popular house pets in the United States beginning in the latter half of the 20th century.

Regular domestic farmyard pigs have also been known to be kept indoors, but due to their large size and destructive tendencies, they typically need to be moved into an outdoor pen as they grow older.

Most pigs also have an extreme fear of being picked up, however, they will usually calm down once placed back on the floor.