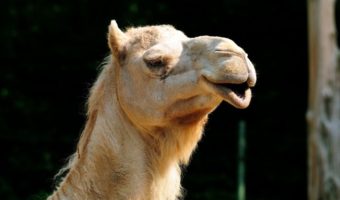 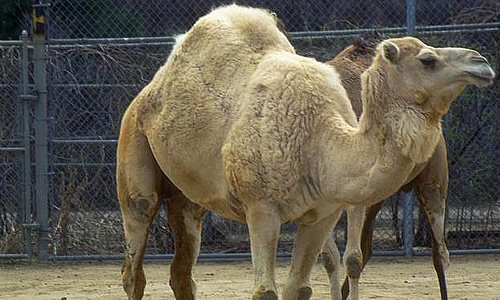 Dromedary Camels are often referred to as the ‘one-humped camel’, ‘Arabian camel’, or simply as the ‘dromedary’. Dromedary hybrids are called ‘Bukhts’ and are good draft camels. Originally native to western Asia and East Africa, Dromedary camels were first domesticated in central or southern Arabia some thousands of years ago.

There are currently almost 13 million domesticated Dromedary camels, mostly in the area from Western India via Pakistan through Iran to northern Africa. None survive in the wild in their original range, although the escaped population of Australian feral camels is estimated to number at least 500,000. Some maintain that the name ‘dromedary’ should be used to refer only to racing camels.

Dromedaries have a cream to brown or black short-haired coat, which is longer on the head, neck, throat, rump and tail. They have a single hump, long legs and a long, curved neck. The hump stores fat, which they are able to draw upon for nourishment and oxidation (chemical combination of a substance with oxygen) of the fat manufactures water. 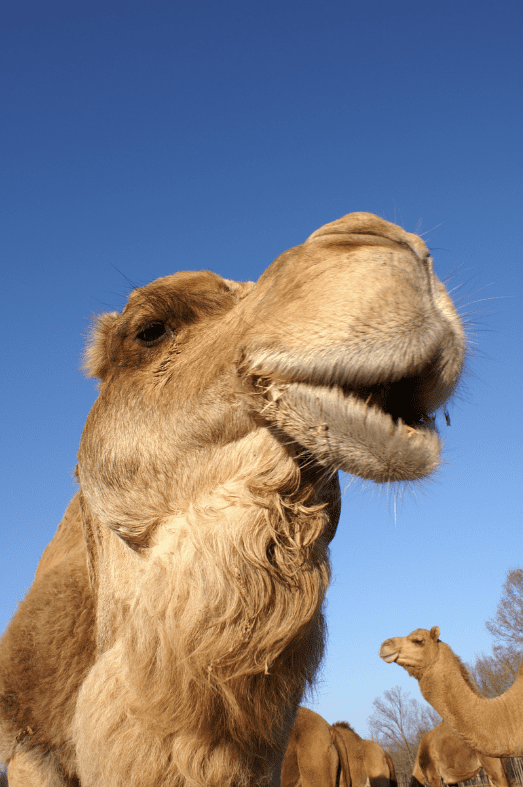 Male Dromedary camels have a soft palate, which they inflate to produce a deep pink sack called a ‘doula’ in Arabic. It hangs out of the sides of their mouth to attract females during the mating season. Dromedary Camels are desert animals and have have numerous adaptations for life in an arid habitat. They have webbed feet (to prevent sinking in the sand).

They can close their nostrils and they have a double row of eyelashes to keep out the sand. Dromedary Camels can endure long periods without drinking – up to 17 days. When they do drink, they can take up to 136 litres (30 gallons) at a time. By producing dry faeces and little urine, they can conserve water. Their body temperature can rise 6 – 8 degree Celsius before sweating.

Camels are herbivores and eat any kind of vegetation they can find including grasses, leaves and plants.

Gestation for the female Dromedary camel lasts around 12 months. Usually a single calf is born and nursed for up to 18 months. Females are sexually mature after 3 to 4 years, males after 5 to 6 years. Life span in captivity is typically about 25 – 30 years, with some animals reaching the age of 60.

Modern domesticated dromedaries are used for milk and meat and as ‘beasts of burden’ for cargo and passengers. Unlike horses, they kneel for the loading of passengers and cargo.

Dromedary camels have an ill-deserved reputation for being bad-tempered and obstinate creatures that spit and kick. In reality, they tend to be amiable, patient and intelligent. A camel will show displeasure by stamping its feet and running. At many of the desert located tourist sites in Egypt, mounted police on camels can be seen.

Dromedaries are extinct in the wild and exist as domestic animals, although some have turned feral. They are not listed by the IUCN.

The name for a group of camels is either called a 'flock' or a 'caravan'.Unlike many other animals, camels move both legs on one side of the body at the same time.The dromedary camel is capable of drinking 100 litres (30 gallons) of water in just 10 minutes.Camels are quite vocal and emit sounds such as groans and moans as well as high pitched bleats and loud bellows.