You are here: Home / Animals / Earthworms 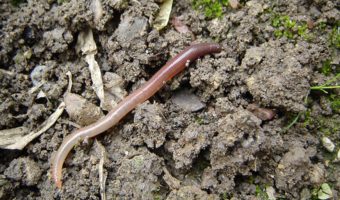 Earthworms are made up of many small segments known as ‘annuli’. These annuli are ridged and covered in minute hairs that grip the soil allowing the worm to move as it contracts its muscles. At about a third of the worms length is a smooth band known as the clitellum. The clitellum is responsible for secreting the sticky clear mucus that covers the worm. Earthworms vary in size from 90 – 300 millimetres.

Earthworms help to fertilise the soil by bringing nutrients closer to the surface. Earthworms are widespread in Britain and Europe. They have been introduced to most parts of the world. They live in soil at depths of up to 2 metres and feed on decaying organic matter in the soil.

Earthworms move slowly underground feeding on decaying organic matter in the soil. They excrete digested material as worm casts and these can be seen as squiggly clumps of mud at the surface of the soil. These castings are very rich in nutrients because they contain minerals and nutrients that have been brought closer to the surface by the worms.

Earthworms are hermaphrodite and have both male and female reproductive cells. They cannot self-fertilise, however, and must find a mate to exchange sperm cells with. Earthworms reach sexual maturity at about 4 weeks old. This species comes to the surface to mate. Copulation, which may take up to an hour, involves two worms lying together with their heads pointing in opposite directions. While mating, the worms seem to shut out all other external stimuli and do not respond to light or touch. Large amounts of mucus are released by both individuals and while closely pressed against one another, sperm is exchanged. After this is complete the worms separate.

After mating the clitellum begins to secrete a substance which hardens to form a ring-like cocoon, into which the worms own eggs and its partners sperm are placed. The 2 millimetre cocoon eventually slips off the worms head end and closes, becoming lemon-shaped. Fertilisation occurs inside the cocoon. This elaborate procedure is designed to prevent self-fertilisation.

Earthworms have the facility to replace or replicate lost segments, but this ability varies between species and depends on the extent of the damage.

You often see earthworms come to the surface in large numbers after a rainstorm. There are three theories for this behaviour.

The first is that the waterlogged soil has insufficient oxygen for the worms, therefore, earthworms come to the surface to get the oxygen they need and breathe more easily. However, earthworms can survive underwater for several weeks if there is oxygen in it, so this theory is rejected by some.

Secondly, some species come to the surface to mate. This behaviour is, however, limited to a few species.

Thirdly, the worms may be using the moist conditions on the surface to travel more quickly than they can underground, thus colonizing new areas more quickly. Since the relative humidity is higher during and after rain, they do not become dehydrated. This is a dangerous activity in the daytime, since earthworms die quickly when exposed to direct sunlight with its strong UV content, and are more vulnerable to predators such as birds.

Earthworms are not listed as endangered on IUCN Red list.