You are here: Home / Animals / Echidna 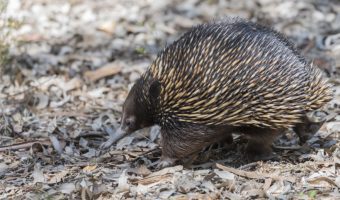 The echidna is best known for its amazing biology. Like the platypus, this unusual mammal lays eggs and suckles its young. There are four extant species of Echidna across 2 different genera, ‘Tachyglossus‘ and ‘Zaglossus‘.

The echidna and platypus are the only members of a primitive group of mammals known as ‘monotremes‘, which are the only oviparous mammals in the world. All other mammals are viviparous.

Echidnas are toothless and feed almost exclusively on ants and termites. They expose termite galleries by breaking open nests with their strong forepaws or snout or by digging into soil. They then extract the termites, which adhere to their long, sticky tongues.

When disturbed, the echidna either curls into a spiny ball to protect its soft underside, or digs its belly into the soil, so that only the spines are exposed.

Long spines cover the body and fur is present between them. These sharp spines can be as long as two inches. Its fur color varies from brown to greyish black depending on the species. In most species of echidnas, the eyes are tiny and the ears are just slits on either side of its head.

These slow-moving creatures have a bulbous forehead and a long snout to collect their food. Males have a spur on the ankle of the hind leg but, unlike that of the platypus, it is not venomous. Their limbs are short but strong and with large claws, perfect for digging and pulling apart dead wood.

The long-beaked echidna is typically larger, measuring up to 30 inches long with a tail up to 4 inches, and weighing up to 20-22 pounds. One species, the eastern long-beaked echidna (Zaglossus bartoni) does not have a tail. As you would expect given the name, they have a longer beak than the short-beaked genus, but it does vary across the species.

Echidnas are widely distributed throughout the Australian continent and Tasmania. Although not commonly seen, they are not considered threatened. The genus of long-beaked echidna is mostly found on the island of New Guinea, whereas the 5 subspecies of short-beaked echidnas are each found in their own territory around Australia, with one subspecies (Tachyglossus aculeatus setosus) residing in Tasmania.

They may be found in any place with a good supply of ants and termites. They live in a wide variety of habitats, from cold mountainous peaks to deserts. They deal with very cold weather by hibernating and avoid extreme heat by sheltering in burrows or other refuges.

Echidnas are usually solitary. However, during the breeding season between July and August they give off a strong smell that may help advertise their presence to the opposite sex.

During this time, several males may follow a single female in a “train” until she is ready to mate. About two weeks after mating occurs, a single soft-shelled egg is deposited directly into the pouch and hatches after 10 days.

Because the echidna does not have teats, the baby clings to specialised hairs within the pouch, where it suckles milk oozing from the mother’s mammary glands. They are very similar to baby marsupials such as baby kangaroos or baby possums, in that they are blind, hairless and very underdeveloped at first. They start life around the size of a jelly bean.

The initially tiny young has an incredible growth rate, increasing its body weight up to 500-fold in the first 45 days of life. Completely hairless when born, the young is covered with short spines by the time it leaves the pouch. Baby Echidna’s stay in the pouch for around 7 weeks.

When it becomes too big and spiky to be carried about, the youngster will be placed in a burrow to which the mother returns every five or six days for suckling. Here it remains until about six months old. Once the baby is ready to leave the pouch, they will begin to search for food on their own.

As they grow, they become subadult and will start to molt their spines. Studies show that sexual maturity is reached between the ages of 5 and 10 years old. The Echidna typically lives an average of up to 16 years in the wild, however they have been recorded into their 40s. In captivity, they have been known to live as long as 45-50 years.

Dingoes and goannas will occasionally eat short-beaked echidnas, particularly young ones that are not fully grown yet. Their relative abundance on large, fox-free islands such as Kangaroo Island in South Australia suggests that the fox may be a significant predator. Short-beaked echidnas that live on mainland Australia indeed have more predators to worry about, including snakes and cats.

Long-beaked echidnas don’t have any large predators to worry about on their secluded island of New Guinea. That is, other than the human threat, which is significant. The only other significant predator are hungry feral dogs that are known to prey on them from time to time.

While the long-beaked echindas may have less natural predators than the short-beaked species, they are actually more at risk.

Short-beaked echidnas are both common and widely distributed around Australia and their natural habitats. Because of their adaptability to different conditions, they have not suffered as much as a result of human expansion, but agricultural growth has caused local extinctions in some areas. They are not currently listed on the IUCN Red List. The biggest threat to the short-beaked echidnas is accidental death crossing roads and tracks.

The biggest threat to the long-beaked echidnas is the human threat. Expansion of territory, deforestation for agriculture and industry, population growth and hunting for food are a major threat to these dwindling species. The pressure for territory on their native New Guinea has seen populations pushed to the fringes and struggling to find safe habitat to survive.

The long-beaked echidna is one of the 25 rare species that Global Wildlife Conservation has identified as needing to be urgently located in their “Search for Lost Species” mission.

Amazing Facts About The Echidna