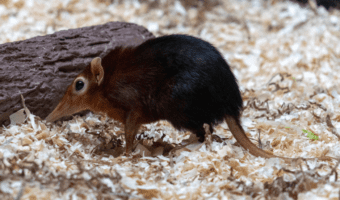 Their traditional common English name “elephant shrew” comes from a perceived resemblance between their long noses and the trunk of an elephant, and their superficial similarity with shrews (family Soricidae) in the order Eulipotyphla. However, phylogenetic analysis revealed that elephant shrews are more closely related to elephants than shrews. The common name of sengis helps disassociate them from the true shrews (order Soricomorpha, family Soricidae) and the treeshrews (order Scandentia).

Recent evidence suggests that elephant shrews may belong to a clade of African mammals, the Afrotheria, which also includes hyraxes, elephants, sea cows, aardvarks, golden moles, and tenrecs. Living members of the family are characterized by a rodent or opossum like appearance, with hind limbs longer than forelimbs, elongated snouts, relatively large eyes and ears, complete auditory bullae, and upper canines with two roots.

Elephant shrews are widely distributed across the southern part of Africa and can be found anywhere from the Namib Desert to thick forest. 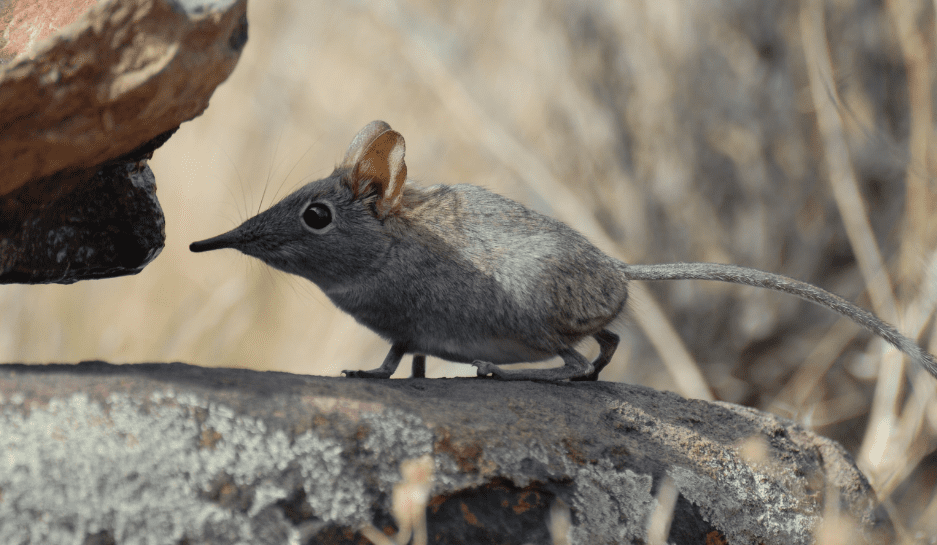 Some species of elephant shrew are highly colored, with the genus Rhynchocyon including the most colorful elephant shrews, while other species, such as the smaller species, tend to be shades of gray and brown. Most elephant shrews are some form of black, grey, brown, white, tan, or golden, and have a pale ring around each eye. Their fur is short, stiff, and glossy, similar to rodents like mice.

They have large canine teeth, and also high-crowned cheek teeth. Their hind limbs are much longer than their forelimbs, and they have relatively large eyes and ears.

In the wild, elephant shrews can live between one to five years. However, they have been known to live up to eight years old in captivity.

To hunt, the elephant shrew uses its nose together with its paws to clear away small paths on the ground in order to lure insects close. They also use their long and skinny tongues to help them catch their food. If their prey is too big, they will pin their prey to the ground with a forefoot.

Elephant shrews have a very good sense of smell and excellent sight and hearing, all of which help them when hunting.

Elephant shrews are diurnal, meaning they are awake during the day and sleep at night. They are very active animals and spend most of their days looking for food.

They are not very sociable animals, and most commonly spend their lives in pairs. They are monogamous and made for life, and a pair will share and defend a home territory they mark using scent glands. Monogamous pairs tend to defend their home sex-specifically — females tend to drive away other females, while males try to ward off other males. Although they live in pairs, the partners do not care much for each other and their sole purpose of even associating with the opposite sex is for reproduction.

Elephant shrews can also be solitary, or may live in small groups. They are one of the fastest small mammals, having been recorded to reach speeds of 28.8 kilometres per hour (17.9 mph). 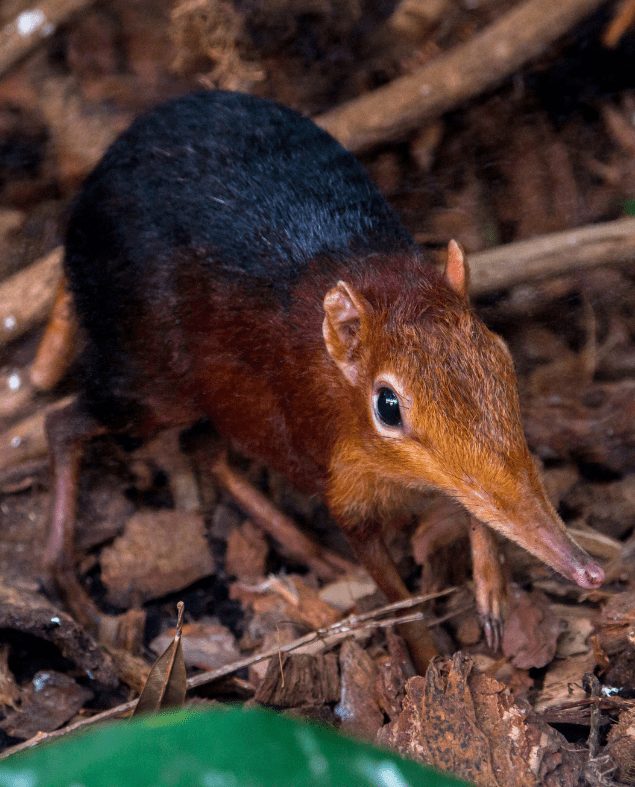 While most elephant shrews are monogamous and mate for life, living with their partner, some solitary species stay together for several days, mate, and then go their separate ways.

Some may also not be strictly monogamous, but mate with other individuals while maintaining their pair relationship

Female elephant shrews undergo a menstrual cycle that is similar to that of human females and the species is one of the few nonprimate mammals to do so.

Their mating period lasts several days females and female elephant shrews have four to six mammae, although will usually bear litters of one to three young several times a year, after a 45 to 60 day gestation period.

The young are born relatively well developed, being able to run within a few hours, but remain in the nest for several days before venturing outside.

After five days, the young’s milk diet is supplemented with mashed insects, which are collected and transported in the cheek pouches of the female.

Babies are weaned from their mothers within a week of birth, and they are ready to explore their surroundings and migrate away from the nest by day 15.

After about 45 days, the young elephant shrews will become sexually active and establish their own nests far away from their parents.

Elephant shrews are widely distributed in Africa, with the exception of western Africa and the Sahara region. Their distribution includes the island of Zanzibar but not Madagascar.

They can be found in the stone deserts, savannas, and arid steppes of the continent. In fact, they are known to thrive in the Namib Desert, which is famous for being one of the driest places in the world. They can also be found in the tropical forests of East Africa as well.

Elephant shrews are generally considered to be an endangered animal. The two species of these shrews that are considered the most threatened are the gray-faced sengi, which was only discovered in 2005, and the golden-rumped elephant shrew, which is officially listed as endangered.

Unfortunately, due to their small size, elephant shrews are at risk from a number of predators. The most common predators of the elephant shrew are snakes, lizards and birds, but most carnivorous or omnivorous type of animal would most likely prey on this animal.

The elephant shrew is, however, well adapted to their habitat to help them escape from predators. Their coloring helps them to camouflage against their habitat, and they’re also very quick moving animals. When needed, they can move up to 18 miles per hour and leap three feet into the air!

Elephant shrews are a part of what is known as Africa’s “Little 5,” a phrase used to call attention to some of the smaller, lesser-known African wildlife. This name is meant to contrast the so-called “Big 5,” which includes lions, elephants, rhinos, leopards, and buffaloes.

There are 20 species of elephant shrew that are placed in 6 genera. 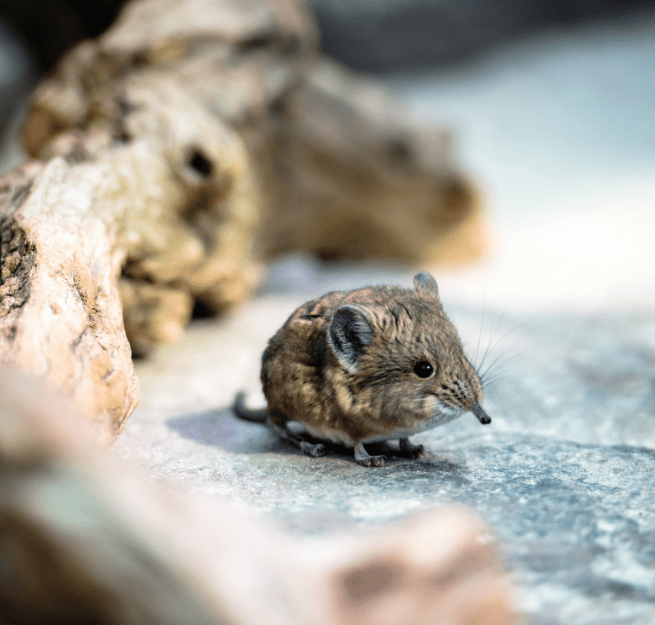 The short-snouted elephant shew is found over a wide area of Africa. Its natural habitats are dry savanna and subtropical or tropical dry lowland grassland. They are the most widespread of the elephant shrew species.

While they have the long, narrow snout symbolic of elephant shrews, their snouts are shorter than the snouts of other species and a bit tapered. They are listed as Least Concern by the IUCN.

The Cape elephant shrew, also known as the Cape rock elephant-shrew or Cape rock sengi, is endemic to South Africa, although it is a relatively common animal. Its natural habitat is rocky areas. It is listed as Least Concern by the IUCN.

The dusky-footed elephant shrew is found in Democratic Republic of the Congo, South Sudan, and Uganda. Its natural habitat is subtropical or tropical dry lowland grassland. It is listed as Data Deficient by the IUCN.

The dusky elephant shrew is found in Malawi, Mozambique, and Zambia. Its natural habitat is dry savanna. It is listed as Data Deficient by the IUCN. 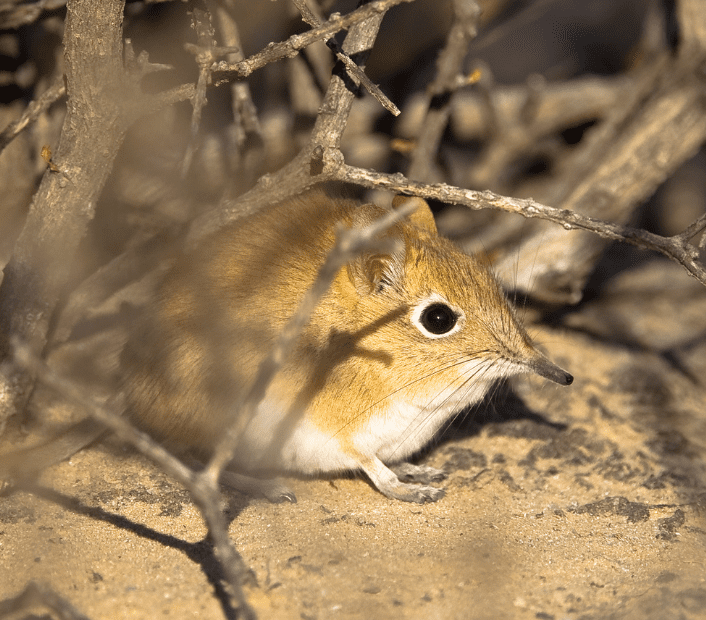 The bushveld elephant shrew is found in Angola, Botswana, Namibia, and South Africa. Its natural habitats are subtropical or tropical dry shrubland and hot deserts. They are listed as Least Concern by the IUCN.

The eastern rock elephant shrew is found in Botswana, Mozambique, South Africa, and Zimbabwe. Its natural habitats are subtropical or tropical dry lowland grassland and rocky areas. It is listed as Least Concern by the IUCN.

The Karoo rock elephant shrew is found in South Africa. It is listed as Data Deficient by the IUCN.

The western rock elephant shrew is found in Namibia, South Africa, possibly Angola, and possibly Botswana. Its natural habitats are subtropical or tropical dry shrubland and rocky areas. They are listed as Least Concern by the IUCN.

The Somali elephant shrew is found in the northern Horn of Africa. It was formerly thought to be exclusively endemic to Somalia, but a 2020 sighting also indicates they are found in Djibouti and potentially Ethiopia. Its natural habitat is arid and semiarid desert with rocky substrates and sparse shrubs. They are listed as Data Deficient by the IUCN.

The rufous elephant shrew, also known as the East African long-eared elephant-shrew, is found in Ethiopia, Kenya, Somalia, South Sudan, Tanzania and Uganda. Their natural habitats are dry savanna and subtropical or tropical dry shrubland. They are listed as Least Concern by the IUCN.

The genus Macroscelides is a genus of round-eared sengis, found in western Namibia and in South Africa. They are members of the clade Afrotheria. 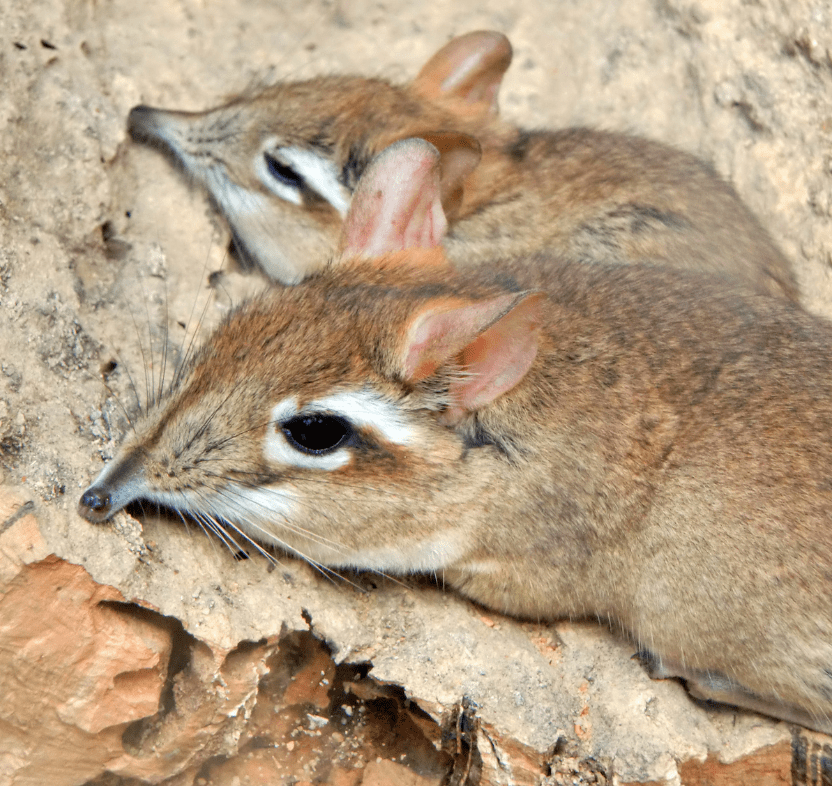 The four-toed elephant shrew is the only living species in the genus Petrodromus. This species is only found in particular regions in Africa, notably in Angola, Democratic Republic of the Congo, Kenya, Malawi, Mozambique, South Africa, Tanzania, Zambia, Zimbabwe, and possibly Namibia. Its natural habitats are subtropical or tropical dry forests, montane forests, and moist savannas lowland forests.

It is the second most widespread of the elephant species and is smaller in size compared to its relatives. The four-toed elephant shrew has broad, upstanding ears and large eyes. It is listed as Least Concern by the IUCN.

The golden-rumped elephant shrew is the largest species of the elephant shrew family along with its close relative the grey-faced sengi. It is found in the northern coastal areas in and around Arabuko Sokoke National Park Mombasa in Kenya. Its name derives from the conspicuous golden fur on its hindquarters, distinctive golden coloration on its rump, and grizzled gold forehead contrasting with its dark reddish-brown color.

This species is classified as endangered.

Their back contains alternating chestnut and lighter colors, creating a “checkered” pattern, which is where they get their name. They are listed as Least Concern on the IUCN Red List. 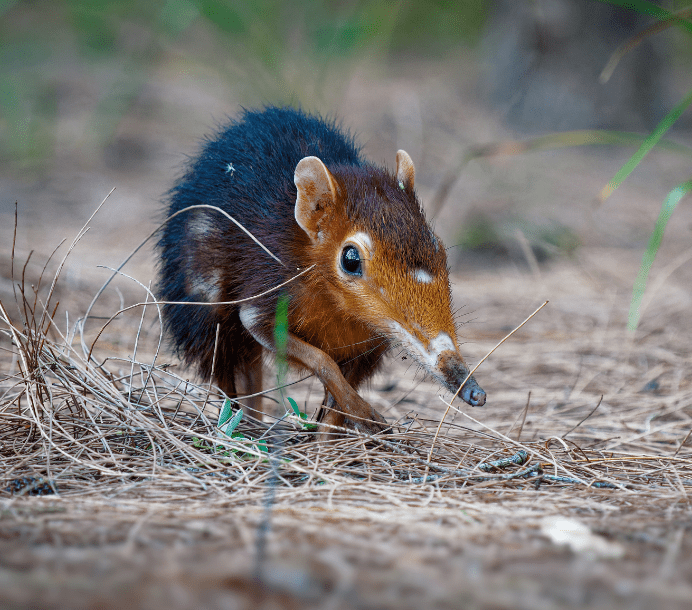 The black and rufous elephant shrew, also known as the Zanj elephant shrew is native to the lowland montane and dense forests of Kenya and Tanzania. It was once listed by the IUCN Red List as vulnerable, but has since been changed to a status of least concern.

The Stuhlmann’s elephant shrew is found in the forests and savannas of Africa. It was discovered in 1893 and declared a new species. It is named after Franz Stuhlmann, a German zoologist, whose name is also found on a variety of other Central African species and subspecies.

The grey-faced sengi is endemic to the Udzungwa Mountains of south-central Tanzania. The discovery of the species was announced in January 2008 — only 15 species of elephant shrew were known until then, and the last discovery was made more than 120 years ago. As the name implies, the species is characterised by a distinctive grey face and a black rump, as well as being larger than the other species of elephant shrews. It is listed as Vulnerable by the IUCN.

Check out more animals that begin with the letter E