You are here: Home / Animals / Elk 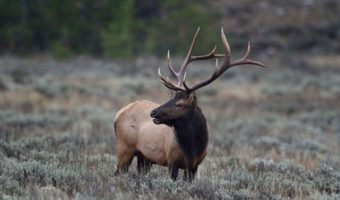 In parts of Asia, antlers and their velvet are used in traditional medicines. Elks are hunted as a game species as their meat is leaner and higher in protein than beef or chicken.

Elks are ruminant animals that have a four chambered stomach, the first chamber stores food and the other three chambers digest it. Their hair has a reddish hue during the summer which turns to a more lighter/grey color during the winter.

Colouration can vary depending on season and habitat. Elks have clearly defined buff colored patches on their rumps. Calves are born spotted which is common with many deer species and they lose their spots by the end of summer.

Towards winter, elks grow a thicker coat of hair consisting of long, waterproof guard hairs covering dense, woolly under fur to insulate them from the cold. Some elks grow thin neck manes.

When summer is approaching, elks rub against trees to remove the excess hair from their bodies. Elks wade or lie in streams, rivers, ponds and lakes to seek relief from heat and biting insects.

Males elks have very large antlers which begin to grow in the spring and are shed every winter. Antlers can reach a length of 4 feet (1.2 metres) and weigh as much as 18 kilograms (40 pounds).

Antlers are made of bone and can grow at a rate of 1 inch per day. While actively growing, the antlers are covered with and protected by a soft layer of highly vascularised skin known as ‘velvet’.

Blood pumping through the veins in the velvet on a bulls antlers cools before it returns to the heart to help keep the animal cool. The velvet is shed in the summer when the antlers have fully developed. Female elks do not have antlers. All elks have short tails.

Throughout their range, elks live in forest, forest edge and alpine meadows. In mountainous regions, they often dwell at higher elevations in summer, migrating down slope for winter. The highly adaptable elk also inhabit semi-deserts in North America.

Elks were herbivorous, eating grass and browsing vegetation from the edges of woodlands. They also feed up on plants, leaves and bark. During the summer, elks eat almost constantly, consuming between 4 and 7 kilograms (10 to 15 pounds) daily.

Elks may supplement their diet at salt licks, where they take in minerals that may help them grow healthy coats and produce nutritious milk.

Mature elks remain in male or female herds for most of the year. Elk cows have a strong herding instinct. During spring and summer, herds of cows and their calves usually graze separately from the bulls. An older cow usually leads the summer herd. As young bulls get older, they spend less time with the cow herds. During winter, males and females forage together.

As with many deer species, elks migrate. Elks that live in mountainous regions migrate to areas of higher altitude in springtime, following retreating snows and then to lower altitudes in the autumn.

During the winter, they prefer wooded areas and sheltered valleys for protection from the wind and availability of tree bark to eat. Some species of elk such as the Roosevelt elk do not migrate due to less seasonal variability of food sources.

Bull elks can move silently through forests at speeds up to 35 miles per hour. Both bulls and cows are strong swimmers. Their walking stride is 30 to 60 inches, however, when running this length can increase to 14 feet.

Agitated elks hold their heads high, lay their ears back and flare their nostrils and sometimes even punch with their front hooves.

Natural predators of elks include wolves and cougars. Bears and coyotes kill some calves and sick adults.

Male elks engage in ritualised mating behaviours during the rut (the mating period), including posturing, antler wrestling and bugling, a loud series of screams which establishes dominance over other males and attracts females.

The bugle call is one of the most distinctive calls in nature. Bugling is often associated with an adaptation to open environments such as parklands, meadows, and savannas, where sound can travel great distances.

The rut lasts from August until early winter. During this time a bull may have up to 20 cows in his harem which he defends fiercely. A bull with a harem rarely feeds and he may lose up to 20 percent of his body weight.

Female elks have a short estrous cycle of only 1 or 2 days. The gestation period lasts between 240 to 262 days after which one or rarely, 2 babies are born. Unlike other types of baby deer, an Elk baby is called a calf. When close to giving birth, the female elk will isolate herself from the rest of the herd and will remain isolated until the calf is large enough to escape predators.

Calves weigh around 15 – 16 kilograms (33 – 35 pounds) at birth. A calf can stand by the time it is 20 minutes old. After around 2 weeks, calves are able to join the herd and after 2 months, they are fully weaned. Calves remain with their mothers until the next breeding period begins. Elks live 20 years or more in captivity, however, only 8 to 13 years in the wild.

Elks were once found across much of North America, however, they were killed off and driven to take refuge in more remote locations.

What Is The Scientific Name For An Elk?

The scientific name for an Elk is (Cervus canadensis)

An elks top two canine teeth are called ivories. Scientists believe ivories are remnants of saber-like tusks that ancestral species of elk used in combat. Most hunters save ivories as a memento of the hunt.