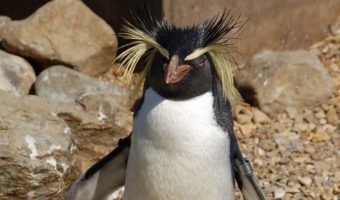 The erect-crested penguin (Eudyptes sclateri) is one of the species of crested penguin, and is endemic to New Zealand. With a striking look, it has plumes of yellow feathers extending from the bill to the back of the head, as well as black upper parts and white underparts.

Little is actually known about the erect-crested penguin and their breeding habits, but it is thought that the numbers of these animals are declining and it is considered endangered. Let’s take a look at this crested penguin in further detail below. 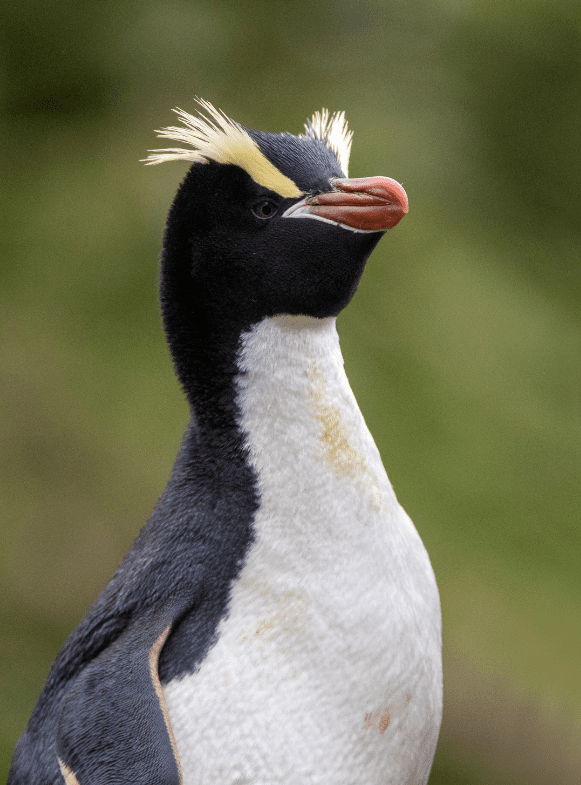 The erect-crested penguin has black upper parts and white under parts, with a yellow eye stripe that extends over the eye to form a short, erect crest, also known as their yellow eyebrow. The backs of their flippers are colored black, whereas the undersides are colored white with black tips. Their eyes are red-brown in color and their bill is large and orangey-brown.

While some members of the erect-crested penguin species are found along the coasts of Australia, New Zealand, and nearby islands in the Southern Ocean (such as the Auckland Islands, Campbell Island, and Macquarie Island), breeding populations are limited to the Bounty and Antipodes Islands near New Zealand.

These penguins nest in large colonies on rocky terrain.

Erect-crested penguins may live as long as 18 years.

While erect-crested penguins are not well studied, it is thought that they feed on small fish, krill and squid like other crested penguin species.

Erect-crested penguins are colonial breeders, and typically forage in small flocks when close to their breeding islands. They only come to land to breed and moult. Fighting over nests is a frequent occurrence at their colonies as prime nesting sites are often hard to come by and competition can be fierce.

Erect-crested penguins travel between May and August, covering a wide area of land looking for food. In early September, at the start of the breeding season, the males and females return to rocky shores to breed, laying eggs in early to mid October. Their nests are usual simple, made of just a few stones and a little mud and sometimes lined with grass.

The female lays two eggs, with the second egg being 17-138% larger than the first egg and typically the only egg incubated full term. Both the male and the female share incubation and care of the young chicks, and they hatch in November.

For the first two or three weeks of life, the chick is cared for by its father. The chick then remains with its mother. When its parents are away gathering food, the chick joins a crèche with other members of its cohort for protection.

By February, the chick is old enough to live on its own and depart the island at this time. Young become sexually mature at four years old. 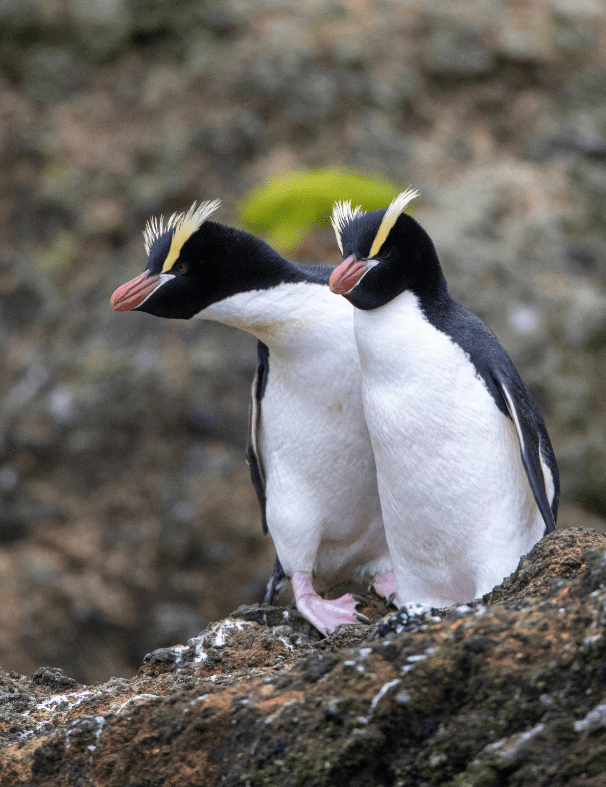 Since 2000, the International Union for Conservation of Nature (IUCN) has listed the species as endangered, and it is also listed as endangered and granted protection under the U.S. Endangered Species Act.

However, it is still not clear why the penguin population is declining. Researchers have been able to rule out mortality due to hunting or introduced predators, but it may be down to oceanographic productivity, which requires adults to swim further to find food for their chicks and therefore reduces breeding success.