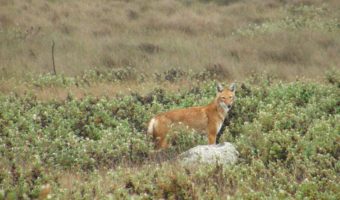 The Ethiopian wolf (Canis Simensis) is known by many names in its range. Locally it is known as ‘ky kebero’, which means red jackal.

The Ethiopian Wolf is one of the rarest and most endangered of all canids. 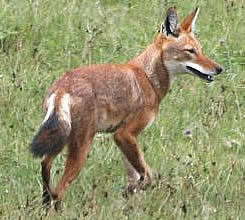 The numerous names reflect previous uncertainty about their taxonomic position, however, they are now thought to be related to the wolves of the genus Canis, rather than foxes they resemble. It is thought that the Ethiopian Wolf may be a descendant of the Grey Wolf.

The Ethiopian Wolf is found in the Afro-alpine regions of Ethiopia and Eritrea, about 10,000 feet (3,000 metres) above sea level. Only about twelve populations, totaling about 450 adults, remain. Ethiopian Wolves tend to live in open moorlands where vegetation is less that 0.25 metres high.

The Ethiopian Wolf is also known as:

Ethiopian Wolves are different than other wolves in that they have a longer muzzle and smaller teeth. The male ethiopian wolves are significantly larger than the females, with the males weighing from 33 – 42 pounds (15 – 19 kilograms) and females weighing from 24 – 31 pounds (11.2 – 14.15 kilograms). Their legs are comparatively long. Their body color is an overall reddish brown with white undersides, legs and markings on the face. Ethiopian Wolves bushy tails are white at the base and black at the tip.

Since September 2003, at least 38 Ethiopian wolves have died from rabies in the Bale Mountains. Another 20 – 25 are missing and presumed dead. This area is home to 300 of these endangered wolves. Scientists believe there are less than 450 left on earth.

Female Ethiopian Wolves carry their pups for approximately 60 – 62 days. The female gives birth to her litter in a den that she digs out in the ground under a boulder or in a rocky crevice. When the pups are born they are charcoal grey, they have no teeth and their eyes are closed. When the pups are about 3 weeks old, their coat begins to be replaced by normal adult coloring and the young start to emerge from the den. The life span of the Ethiopian Wolf is actually unknown.

The Ethiopian Wolf is a carnivore. The Ethiopian Wolf preys on rodents ranging in size from hares to the Giant Mole Rat to that of the common grass rats. They also eat eggs, goslings and young ungulates and they will occasionally scavenge on carcasses. Ethiopian Wolves also catch their prey in shallow holes.

When feeding on rodents, ethiopian wolves tend to hunt alone, however, they are territorial social canids that form packs and defend territories. The pack, which contains up to 12 adults with a skewed mating ratio of several males to each female, patrols and defends the territory. For more information on the behaviour of wolves in general see Wolf Behaviour.

Threats to the Ethiopian Wolf

Continuous loss of habitat due to high-altitude subsistence agriculture represents the major current threat to the Ethiopian wolf. Sixty percent of all land above 3,200 metres (10,000 feet) has been converted into farmland and all Ethiopian wolf populations below 3,700 metres (12,000 feet) are particularly vulnerable to further habitat loss. Habitat loss is exacerbated by overgrazing of highland pastures by domestic livestock and in some areas habitat is threatened by proposed development of commercial sheep farms and roads.

Recommendations in the Ethiopian Wolf Action Plan included that further surveys be conducted in Northern Ethiopia, in order to assess the global status of the species. In 1998 and 1999, the Ethiopian Wolf Conservation Program (EWCP), a WildCRU undertaking supported by the Born Free Foundation (a UK based NGO), conducted preliminary surveys in all suitable afroalpine habitats in the Amhara Region, northwest of the Rift Valley, leading to an increase of the estimated global population of Ethiopian wolf from around 400 individuals to between 500 and 550 individuals.

The most important results were from the Wollo Administrative Zone, where wolf presence was not widely known and was confirmed in a number of habitat areas during the EWCP surveys, leading to an estimate of around 80 wolves in the area.