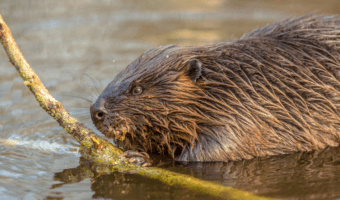 The Eurasian beaver (Castor fiber), also known as the ‘European Beaver‘, is one of the largest species of rodent in the world, and the largest in Eurasia. The only rodent with a larger size on average, is the Capybara. These semi-aquatic rodents are found throughout Europe and Asia, from as far west as Spain, and as far east as China.

These beavers were hunted to extinction in many countries in centuries past, mainly for their fur and meat. Thankfully some populations survived and in the 20th century populations increased which allowed for these animals to be reintroduced to many areas across their range. Efforts to revitalize the population are ongoing.

The Eurasian Beavers are slightly larger than their American Beaver cousins, with whom they are the only two extant species of the genus ‘Castor‘.

Water is essential for the sustenance and safety of beavers. Their skills in transforming their habitat not only benefit them, but also the entire ecosystem, granting these animals a well-deserved title as keystone species. They are an important species for conservation efforts due to their role in maintaining healthy ecosystems.

The Eurasian Beaver is generally larger than it’s American cousin, with the average adult weighing between 25 – 72 lbs. Exceptional specimens have been reported at up to 88 lbs in weight. In terms of size, the average length is between 31–39 inches (80–100 cm) for the head and body, with a tail length of 9.8–19.7 inches (25–50 cm). While similar in weight, they are about 10% larger than the American Beaver in terms of length/size.

They have thick fur that ranges from reddish-brown to nearly black, but most of the European species – around 66% – have beige or pale brown fur. Around 20% have reddish-brown fur, but it does vary by region and by population. In Belarus for example, the most dominant color if fur is the reddish-brown, whereas in areas of Russia, the dominant color is black.

In terms of shape, the European Beaver has smaller shins and a narrower tail than the American species, making them less proficient with bipedal movement. They also have a larger and flatter skull. Both species have a thick undercoat for insulation and a slick coat of guard hair for waterproofing.

All beavers have four webbed digits on their hind feet, which helps them move quickly and efficiently in the water. Their front feet are not webbed, but have very sharp claws.

They are also equipped with long, curved incisors that enable them to chop down trees and build their own lodges and dams. Their impressive teeth also give them access to the cambium and bark of these trees, providing a nutritious source of food.

When selecting an area for building their colony, Eurasian Beavers always choose a spot close enough to suitable tree specimens as well as water sources which they can manipulate to create their homes and environment.

Differences Between The North American Beaver And The Eurasian Beaver

The Eurasian Beaver can be found across Europe and Asia. In Europe, they are distributed across northern countries of Scandinavia, as well as many areas in Russia. In Finland, the American beavers has also been introduced as an invasive species, but these populations have yet to meet in the wild.

They can be found as far west as Spain, and have been reintroduced to many areas where they had become previously extinct.

Efforts in many countries including the UK, Switzerland and France, continue to reintroduce beavers to the wild and encourage population growth.

In Asia, beavers are found in China & Mongolia, Iran, Iraq and Syria in particular, as well as other areas. Again, they were widely hunted to the brink of extinction well into the 19th Century, with many conservation efforts and protective measures put in place to revive the species since the early 20th Century. Despite this, the species is still locally extinct widely across much of their historical Asian range, and still vulnerable in many areas where conservation is managed.

Eurasian beavers live in freshwater habitats such as rivers, streams, marshes, ponds and lakes. They prefer slow-moving water with an abundance of vegetation for food and material for building their homes and dams. They will also inhabit brackish waters near the sea but are less likely to do so than the American beaver.

Their habitat is best characterized by being near a source of fresh water and having a substrate (ground) composed mostly of muddy sediment that can quickly dry out when the weather is hot and sunny. This type of environment allows them to build their lodges, dams, and canals which are integral parts of their habitat.

The lodges have multiple entrances that are submerged underwater to avoid potential predators.

Eurasian beavers are herbivores, meaning they feast on plants. They enjoy munching on aquatic vegetation such as grasses and sedges, tree bark and foliage from willow, birch and aspen trees. They are not omnivorous as previously believed, but they do have some favourite foods.

We mention more about this in our guide on what beavers eat, but in general, they are known to eat leaves, bark, and branches from trees, as well as aquatic plants. They also eat nuts, berries, and other fruits. They seem to be able to adapt and eat whatever is available to them, and are even good at breaking down cellulose.

In the winter, when food is scarce, beavers will eat their own faeces to get nutrients. There is evidence of them doing this in the comfort of their own lodges. Their diet does seem to change seasonally, depending on the availability of foods, as well as their fuel and nutritional needs.

Like their American cousins, the Eurasian Beaver is renowned for their incredible engineering skills. They are masters of manipulating their environment to create the habitat they need. They are an incredibly important species, because their manipulation of watercourses, building dams and canals not only benefits them, but their wider ecosystem, and the animals and insects within.

These little engineers are quite social creatures within their own colonies, but can be territorial toward others. During the day, they can be seen swimming around their lodges or foraging for food in groups. They are also known to build make-shift ‘fridges’ against the walls of their lodges, for storing food.

When threatened, these animals will slap their tail against the water to warn away predators or alert other members of the colony. Within the family unit, older siblings help the adults to run the family unit, finding food and looking after their younger infant siblings. A beaver colony is a truly functional family, all members contribute and make it work.

Beavers are one of the few species of animals that are monogamous. Once mated, they stay together for life. The exception to this is if one beaver dies, the other will then attempt to find a new partner.

The gestation period for a female Eurasian beaver is around 107 days, which is around 20 days shorter than for the American Species. Other than that reproduction and breeding behaviour is more or less identical.

Birthing takes place in a specific room within the beaver lodge. A litter will have between 1 to 6 babies, but usually 3-4, which are called kits. These kits reach maturity at around the age of two, and at this time they move on to try to form their own colony. They generally don’t become sexually active however, until around 3 years of age. This can be a particularly vulnerable time for beavers setting out on their own.

A new colony will consist only of two mating beavers until they have their first litter. Depending on the volume of kits born in their litters, a beaver colony can be up to 12-13 beavers, but this is more than the norm.

Despite their best efforts to create a safe, semi-aquatic environment to protect from predators, there are some animals that will pounce at the chance to eat a beaver. Predators such as wolves, bears and foxes are some of the biggest predators of Eurasian Beaver. Wolves, in particular, have been known to hunt beavers throughout Europe and Asia. In addition, some birds of prey like hawks have been known to hunt beavers for food.

Another unlikely predator, that is sometimes mistaken for a beaver, is an otter. Otters, though similar in size, will happily prey upon beavers, particularly beaver kits when the opportunity arises.

While the Eurasian Beaver was hunted almost to extinction prior to the 20th Century, in the last few decades numbers have been increasing across many parts of Europe. From an estimated population of around 1200 at the turn of the 20th Century, populations have recovered to the degree that the species is not listed only as a species of ‘Least Concern’ on the IUCN Red List.

Individuals have been reintroduced to areas where they were locally extinct or dwindling, such as in Britain, particularly Scotland and England. Many countries across Scandinavia, Continental Europe and Asia have also reintroduced these animals where they were once extinct. Despite these efforts, in some areas, particularly in Asia, the populations remain vulnerable and at risk.

In other countries such as Portugal, Moldova and Turkey the species is still locally extinct, with no current plans to be reintroduced.

Amazing Facts About The Eurasian Beaver