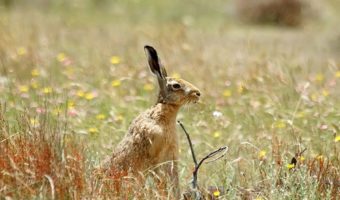 The European Hare grows to about 50 – 70 centimetres and has a tail length of 7 – 11 centimetres. 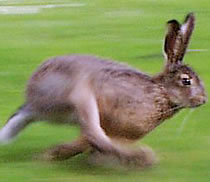 The weight of a full grown adult hare varies between 2.5 and 6.5 kilograms. Because of its longer legs, it can run at speeds of up to 70 kilometres per hour. European Hares are herbivores and their diet consists of grasses and herbs during summer months and changes to twigs and bark in the winter. The European Hare is known as a pest to orchard farmers as it also feeds upon buds of young orchard trees during the end of winter.

During their spring dominance competitions, males can be seen performing what is known as ‘boxing matches’, hitting each other with their paws. It is most commonly done by the males, however, females have been known to perform this act by hitting males when they are not ready to mate or to test the determination of the male.

The European Hare is declining in Europe due to changes in farming practices. Its natural predators include the Golden Eagle and carnivorous mammals like the Red Fox and Wolf.

Smaller hares native to southern Europe previously regarded as European Hares have been divided as a separate species in recent years, including the Broom Hare in northern Spain.