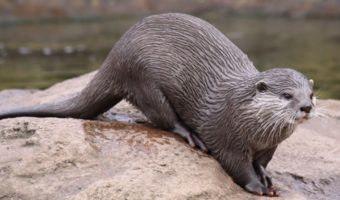 The European Otter (Lutra lutra) is also known as the Eurasian River Otter, Common Otter and Old World Otter. It is a European member of the Mustelidae or weasel family and is typical of freshwater otters. The European otter is the most widely distributed otter species being widely spread across Europe. The otter is believed to be extinct in Liechtenstein, the Netherlands, and Switzerland.

Otters are now very common along the coast of Norway and in Northern Britain, especially Shetland where 12% of the UK breeding population exist. 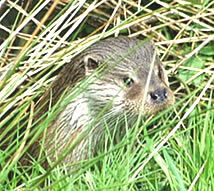 An otters diet mainly consists of fish, however, it can also include birds, insects, frogs, crustaceans and small mammals. This opportunist mammal may inhabit any unpolluted body of freshwater, including lakes, streams, rivers and ponds, as long as there is good supply of food. Otters may also live along the coast in salt water, however, they require regular access to freshwater to clean their fur.

Otters are strongly territorial and generally live alone for most of the time. An otters home range can vary between 1 – 40 kilometres, with about 18 kilometres being usual, depending on the density of food available.

Male Otters and female Otters will breed at any time of the year and mating takes place in water. After a gestation period of about 63 days, 1 – 4 pups are born, which remain dependent on the mother for about a year. The male Otter plays no role in parental care. This is because, a few days before the young otters are born, the female otter begins to bite her partner until the male otter leaves. Otherwise the male otter would probably eat his young generation as he cannot tell the difference between rats and new born otters.

Hunting mainly takes place at night, while the day is usually spent in the otters ‘holt’, a burrow in the riverbank which can only be entered from underwater.

Trapping for their dense fur has been the main conservation risk for many otter species, however, the European otter faces another threat. The increasing intensification of farming across Europe in the 20th century provoked many hunters to illegally capture a large portion of the wild otters. Because of the effect of poaching, the otter population rapidly declined in the second half of the 20th century becoming endangered.

However, concerted efforts are now being made to integrate otters alongside modern farming methods, including heavy European regulations for the humane treatment of otters. Harsher punishments and fines now help prevent otter poaching. In Britain this is yielding results as the number of sites with an otter presence is increasing. Due to the growing public sympathy for the otter population, the number of otter furs is decreasing.