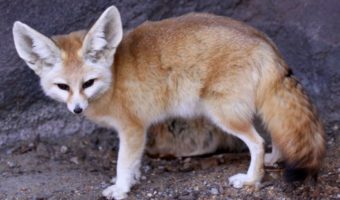 The Fennec Fox (Vulpes zerda) is a small fox native to the Sahara Desert, the Sinai Peninsula in Egypt, and the Arava and Negev deserts in Israel. They are most notable for their very large ears, which are used to both aid their hearing and to help them to control their body temperature.

Belonging to the family Canidae, these small animals are close relatives of dogs, but have adapted to life in the desert. The exact population of the fennec fox is not known, but they are frequently seen in the wild and it is thought they are not threatened by extinction. Thanks to their cute appearance, they are kept as pets in some parts of the world, and their fur is prized by the indigenous peoples of North Africa. 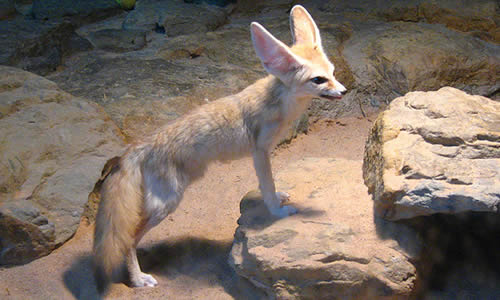 The fennec fox is the smallest canid species, with the largest ears relative to their body size. These foxes are much smaller than the red fox, Canadian marble fox and the Arctic fox. They are usually 9 to 16 inches (29 to 41 centimeters) in length and have a weight of about 3.5 pounds (1.6 kilograms). Males are usually larger than females.

Their ears can reach between 4 to 6 inches in length and not only help them listen for prey underground, but also help to keep them cool by dissipating excess heat.

These foxes have a thick, sandy-colored coat that keeps them warm at night and reflects the sunlight during the day. It also helps them to camouflage themselves against their environment. They are nocturnal animals and therefore escape the hottest part of the day, but have fur on their feet that protects their footpads from the hot sand.

Fennec foxes have long and bushy black-tipped tails that help to steer them when changing direction when running and also keep their nose and feet warm while they are curled up sleeping in their dens. They also have long and sharp, curved claws that enable them to effectively dig their burrows with great speed.

The fennec fox has a life span of up to 14 years in captivity and about 10 years in the wild. 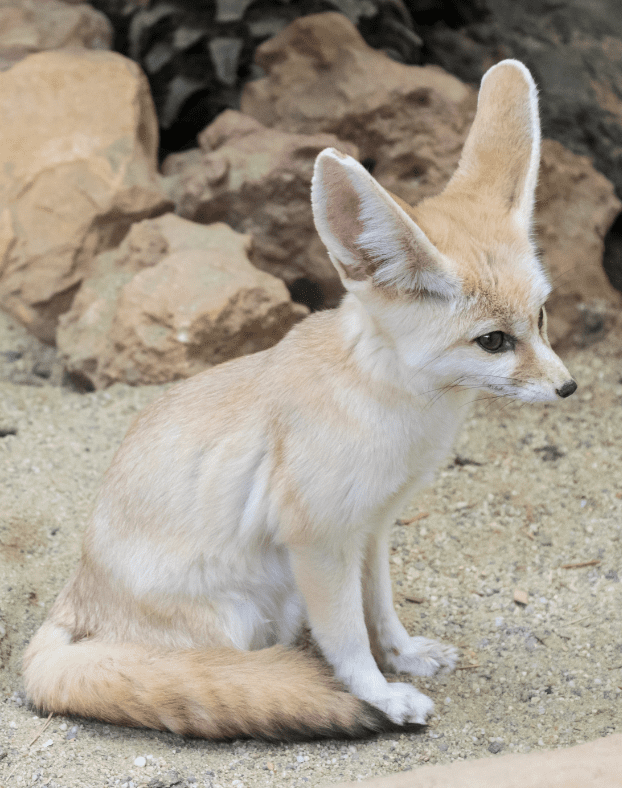 The fennec fox is an omnivore and eats a variety of different foods, including insects, rodents, snails, lizards, geckos plants, fruits, roots, and eggs. They eat foods both above the sand and below the surface, using their ears and excellent hearing to hunt down their prey.

They have adapted to the desert environment and are able to live with very little water. Most of the water they need comes from the plants they consume. Their kidneys are specially developed to ensure that there is minimal water loss in their day to day lives.

Fennec foxes are mostly nocturnal animals, which helps them to escape the heat and predators. They emerge from their dens at dusk to begin to search for food. Their large ears allow them to successfully hunt and locate food sources, even prey that is under the ground.

They are usually solitary animals, but can live in groups of up to 10 individuals. A group of foxes is called a “skulk” or a “leash”. Their dens can be in close proximity to each other, or in some cases connected to one another. Like other canines, male fennec foxes mark their territory with urine and become incredibly aggressive towards one another, particularly when competing for females during the mating season.

Fennec foxes can be vocal and use barking, whimpering and whining to communicate with each other.

Fennec foxes mate between January and March and are monogamous, meaning that once they have found a mate, they mate for life! Couples will inhabit the same den for the entire year. After mating, the male becomes very aggressive and protects the female, providing her with food during pregnancy and lactation.

The gestation period of a fennec fox is two months long and the vixen will produce between 2 and 5 offspring that are known as kits. The kits usually weigh just 50 grams at birth and are gray in color. They open their eyes after 8 to 11 days and nurse for the first 5 weeks of life before moving onto solid food.

Fennec foxes remain with their mother for the first two months of their life, during which time the male fox hunts for food for the family. Fennec foxes are fully mature by the time they are 11 months old. 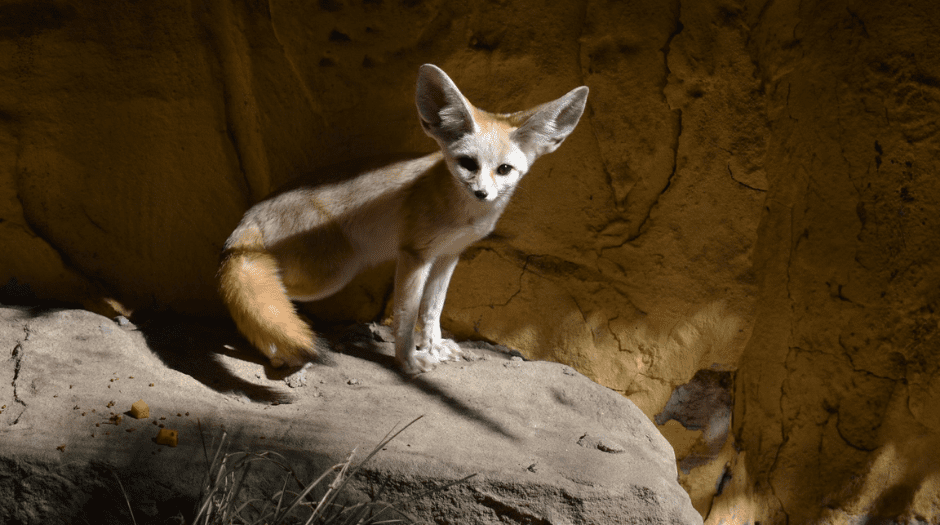 Fennec foxes can be found in regions across northern Africa and the northern Sinai peninsula. Their range covers Morocco across to Egypt, south to north Niger and Sudan and east to Kuwait, and they live in both the Sahara and Nubian deserts. They thrive in sandy and semi-arid desert regions and survive by digging extensive underground burrows within sand dunes that can be up to 120 m2 (1,300 square feet) large, with up to 15 different entrances. These burrows help to keep them cool and also protect them from predators.

The fennec fox is not currently endangered and is currently listed as a species of least concern, according to the International Union for Conservation of Nature (IUCN) Red List of Threatened Species. Fennec foxes are at risk from the illegal pet trade, particularly in North Africa where they are captured and sold to tourists. They are bred commercially as an exotic pet, with breeders removing pups from their mother to hand-raise them. They are also hunted for their fur.

Fennec foxes do not have many common predators in their natural environment. The biggest predator of fennec foxes in the wild is the eagle owl, but they are also preyed on by larger mammals such as hyenas, caracals, jackals and domestic dogs. They are also threatened by habitat loss due to humans.