You are here: Home / Animals / Ferret 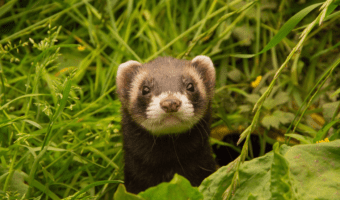 The ferret (Mustela furo) is a domesticated species, found all over the world. They belong to the family Mustelidae, which also includes the stoat, badger and mink. It is thought that they are most likely a domesticated form of the wild European ferret or polecat (Mustela putorius).

Ferrets are usually characterized by their long, slender bodies and long tails. They are sexually dimorphic and males are considerably larger than females. They are carnivores and, in captivity, usually eat dry foods such as cat food, but may also be fed pre-killed or live prey by their owners.

Ferrets make good pets and are popular throughout the world, with over 5 million in the United States alone. However, in some countries, such as New Zealand, there are restrictions on ferret owning. It is unclear when or how the ferret became domesticated, but it is thought they were most likely bred for sports such as hunting.

These domestic ferrets are not listed on any conservation lists, because their populations are far from low. 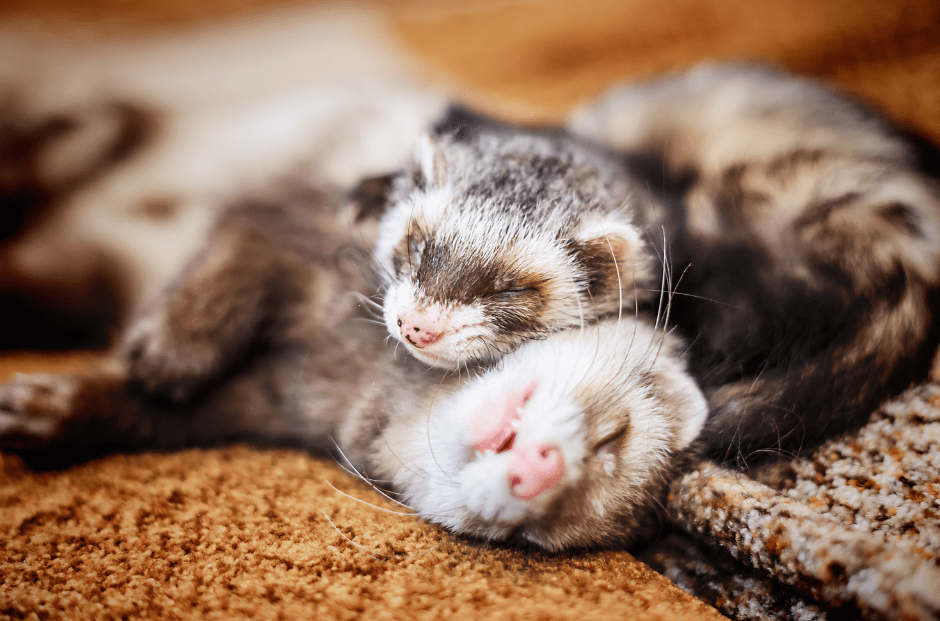 These animals have been bred for a large variety of fur colors and patterns, with the most common 7 colors being sable, silver, black sable, albino, dark-eyed white, cinnamon, and chocolate, although sable is the most common. Common pattern types are Siamese or pointed patterned, panda, Shetlands, badgers, and blazes.

Ferrets have a set of five, non-retractable claws on each paw and an average tail length of 7.6 to 10 cm. They also have 34 teeth in total and large canine teeth.

These small animals often get confused with other members of the family Mustelidae, such as the weasel. In comparison, weasels are not as long as ferrets, and have a different habitat — they prefer grasslands while weasels inhabit a wider variety of habitats that include marshes. Weasels are also much more aggressive than ferrets, which is one of the reasons you don’t often see weasels as pets!

As pets, ferrets can live for between 6 and 10 years. However, in the wild, they do not live as long. That being said, there are some diseases and illnesses that can drastically shorten the lifespan on the domestic ferret, including rabies, urinary stones and bone marrow suppression.

Ferrets are obligate carnivores, meaning they must eat only meat and cannot survive without it. Domesticated ferrets should eat a diet of at least 20% fat and 34% animal protein, and therefore are usually fed some form of ferret food, cat food, or dog food. They can also be fed raw meat but this on its own is not enough. In the wild, ferrets eat all parts of their prey, including the liver, heart, and other organs. Their prey includes mice, rats, gophers, prairie dogs, rabbits, and other small mammals, birds, reptiles, and amphibians.

The ferret has a very high metabolism and therefore food travels through the digestive tract in 3-5 hours. Because of this, ferrets need to eat up to 10 times a day 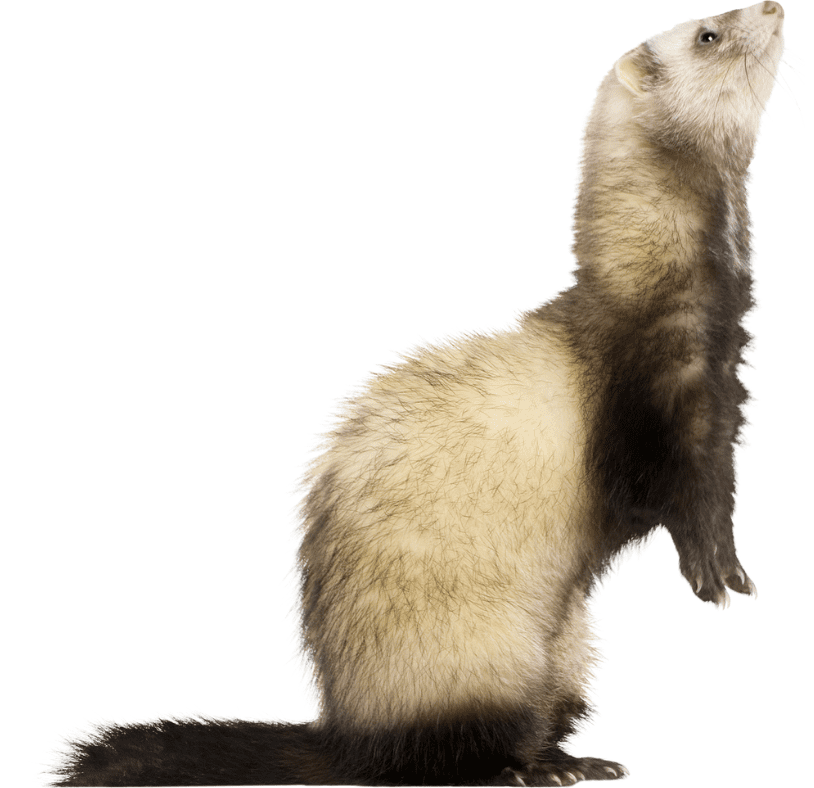 Ferrets were historically used for hunting thanks to their long, lean build, and inquisitive nature, which made them well equipped for getting down holes and chasing rodents, rabbits and moles out of their burrows. They were first introduced into the American continents in the 17th century, and were used extensively from 1860 until the start of World War II to protect grain stores in the American West from rodents. They are still used for hunting in some countries, including the United Kingdom.

The ferret is naturally crepuscular and is most active at dawn and dusk, but domestic ferrets will change this depending on when their owner is around to give them attention. They are playful and will interact with other pet ferrets, cats, and dogs in a friendly manner. Despite this, they also often sleep 18 to 20 hours per day. They actually sleep so deeply that one can hold, poke and yell at them and they won’t wake up!

Ferrets seek out attention and can be trained. They can be taught tricks and will respond to discipline, and have an instinct to habitually urinate and defecate in the same places, and therefore can be trained to use a litter box.

The ferret will “dance” when it is happy or excited, and will engage in playful wrestling with other ferrets. They also have many forms of verbal communication, including ‘docking’ or ‘clucking’ to show they are excited. They will ‘bark’ if they are very excited. They will also ‘screech’ as a sign of terror, pain, or anger.

Healthy domestic ferrets can have up to three successful litters per year, and up to 15 kits. The average gestation period is 42 days. Kits are born deaf and have their eyes closed and typically weigh about 6 to 12 grams. Baby incisors appear about 10 days after birth. When they are 5 weeks old, the kits eyes and ears open. They are weaned after three to six weeks and become independent at three months. They become sexually mature at approximately 6 months.

Ferrets are found all over the world as domesticated pets. In the wild, they live throughout Europe, northern and western Asia, and North Africa. The black-footed ferret species, which is often confused with the domestic ferret, lives in the shrublands and grasslands of North America and hence is also called the North American black-footed ferret.

In the wild, ferrets reside in forests, meadows, parks, villages, farms, and barns or anywhere there is food. They also prefer areas where there are water sources close by.

Ferrets are not considered to be endangered or threatened and they are not listed on any conservation lists. The biggest threat to domesticated ferrets is health problems, of which the most common for ferrets are cancers affecting the adrenal glands, pancreas, and lymphatic system.

In the United States, ferrets were relatively rare pets until the 1980s. They are illegal in California under Fish and Game Code Section 2118, and are also illegal as pets in Queensland and the Northern Territory in Australia. In New Zealand, it has been illegal to sell, distribute or breed ferrets since 2002, unless certain conditions are met. In Brazil, ferrets are allowed only if they are given a microchip identification tag and sterilized.

The biggest predators of ferrets are birds of prey, such as hawks and owls. They are also eaten by large carnivorous mammals, such as dogs, coyotes, foxes, badgers.