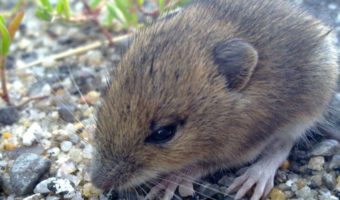 The Field Vole (Microtus agrestis) is also known as the Short-tailed Vole. The Field Vole is one of the most common small rodents in the countrysides of Britain and Europe. It is found throughout the British mainland, however, it is not resident in Ireland, the Isle of Man or Northern Isles.

As an important food source for owls and some other predators, their population peaks and falls in a 3 – 5 year cycle. It is very similar to the Bank vole (Clethrionomys glareolus), however, the latter has red-brown fur, a longer tail and more prominent ears than the field vole.

There is an Orkney vole (Microtus arvalis), found only on the Orkney Islands in Scotland and the Channel Island of Guernsey. It is like the field vole however, it is deeper brown in color and is a little longer and heavier.

The Field Vole pre-breeding season population is estimated to be in excess of 75 million.

The Field Vole has a head and body length of 8 – 13 centimetres, its tail is around one third of its body length. A field voles weight can vary greatly from 14 – 50 grams. They have a mouse-like nose, but it is slightly blunter. Field Voles are covered in fur which is yellow/brown to greyish in color. Their underparts are white and they have small eyes.

Field voles food is primarily succulent grass stems and green leaves, however, roots, bulbs and bark are also eaten, particularly in winter when fresh vegetation is hard to find.

Field voles are active by day and night. They can be aggressive and each one has its own small territory which it fiercely defends from other voles. They fight noisily, uttering loud squeaks and angry chattering noises. Each vole makes runways among the grass stems, usually centred on a tussock where it nests.

Although Field voles dig burrows, they usually build nests above ground at the base of grass stems, sometimes protected by a stone or log. They make small underground cavities in which grass is stored for the winter.

Field voles are one of the most numerous British mammals and because they are heavy breeders, populations in a favourable habitat often increase their populations to thousands and is known as a ‘vole plague’. When this happens, competition for space and food and increased aggression leads to less successful breeding, with the result of a population decline.

The fluctuations in populations usually occur in 3 – 5 year cycles, as aforementioned. Some predator populations also increase as the vole populations increase. Field voles are the main food of barn owls, forming 90 per cent of their diet. A shortage of voles has an effect on the number of young barn owls reared.

Other predators include foxes, stoats, weasels, kestrels and snakes.

Field voles breed during March to October, however, they may continue breeding into December. Females produce 4 – 6 young after a gestation period of 18 – 20 days. Young voles are born in a nest of dry grass, usually hidden in a thick grassy tussock.

Males can breed at 40 days of age, females at 28 days. They are therefore able to produce 2 – 7 litters of 4 – 6 young per year. The young have grown their fur by 10 days old and are weaned at around 16 days. The lifespan of a field vole is around 2 years.

Field voles are common and widespread and are therefore not considered to be an endangered species.