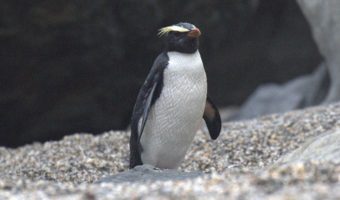 The nesting areas are difficult to see because of the thick vegetation where the nests are located.

The total population of fiordland penguins has been estimated to be fewer than 1,000 breeding pairs. Easily disturbed by humans, their population appears to be decreasing as a result of chick predation by introduced species such as dogs, cats, ferrets and stoats.

The Fiordland Crested Penguin has dark, bluish-grey upper parts with a darker head, and white under parts. It has a broad, yellow eyebrow-stripe which extends over the eye and drops down the neck. Most birds have 3 – 6 whitish stripes on the face.

Fiordland Crested Penguins nest in loose communities under bushes, in rocky crevices or among tree roots, close to but out of sight of each other.

The males return to the breeding sites in June (mid winter), usually to the site of the previous years nest. The female follows shortly after and two eggs are laid in July. The eggs are incubated for 30 to 36 days with the parents taking turns on the nest (in long 5 to 12 day shifts) while the other goes out to sea to feed.

As is the case with many penguin species, the first egg usually fails to hatch and even if both chicks do hatch, the smaller chick from the first egg is often unable to compete for food, dying of starvation within a short time.

Scientists think this genetic trait has evolved as a means of ensuring at least one healthy offspring. The surviving chick is then guarded by the male and fed by the female for the first few weeks of life. After this, both parents feed the chick, taking turns hunting for food.

Wandering chicks may often ‘creche’ (form groups) with other chicks if they are nearby, but they will return to the nest to be fed. Chicks fledge (replacing their greyish down feathers with adult feathers) in November, when they are ten weeks old and are now able to swim and find food on their own. They will return to their home colonies to breed at around five years of age.

Natural predators of Fiordland crested penguins include fur seals and some large fish species. It is also under threat from introduced predators including Weka, dogs, cats, stoats and rats.

The current status of this penguin is vulnerable due to its small population. Current population estimates range between 2,500 – 3,000 pairs and is thought to have declined since the late 1980s by around 33%.