You are here: Home / Animals / Flatworms 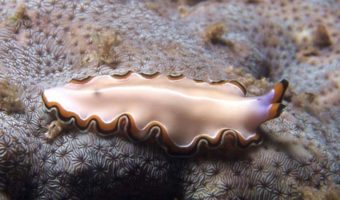 Flatworms are the simplest of the worm groups. There are about 20,000 species in this group. Flatworms are found many places and can be free living or parasitic. A parasite lives off another living thing called a host and can be harmful. One of the best known flatworms is the tapeworm.

Flatworms are bilaterally symmetrical and dorsoventrally flattened meaning ‘they look like a ribbon’. Their bodies have 3 layers of tissues with organs and organelles however, they contain no internal cavity. Flatworms possess a ‘blind gut’, they have a mouth but no opening at the lower end of the alimentary canal through which solid waste is eliminated from the body. Instead, they have what are called ‘Protonephridial excretory organs’.

Flatworms reproduce as hermaphrodites. Most species occur in all major habitats and are parasites of other animals feeding mostly on small animals and other smaller life forms.

Flatworms are found in marine and fresh water. Flatworms are not related to sea slugs or other molluscs. Although very thin and delicate, flatworms are active carnivores and scavengers, using their proboscis to feed on dead or injured animals and colonial animals such as bryozoans and soft-corals. Flatworms can quickly glide along the bottom by using the fine hairlike cilia which cover their body. When disturbed they can swim for a considerable period of time by throwing the sides of their body into undulating waves.

Below is a diagram of a Flatworm which shows the eyespots, Pharynx and mouth. 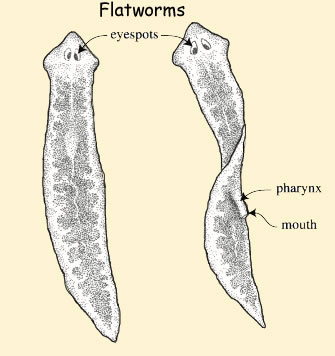 Below are a few more details about the anatomy of a Flatworm.

System Type Flatworms System Muscular-Skeletal A flatworm has no skeleton. It has tiny bristles called cilia that help it move as well as two layers of muscles under its skin. It has three cell layers called the endoderm, the mesoderm and the ectoderm. They also have the beginnings of a head region. Digestion A flatworm has a combination digestive/excretory system. It takes food in and gets rid of wastes through the same opening. Nervous A flatworm has a very simple nervous system with two nerve cords running down either side. It has two simple brains called ganglia, which are simple bundles of nerves. It has two eyespots that help it sense light. Circulation A flatworm has a gastrovascular cavity with one opening. It eats small worms, insects and microscopic matter. Respiration A flatworm takes in oxygen, but has no formal respiratory system. Reproduction A flatworm reproduces by splitting in two. When a flatworm is split up it immediately forms a new flatworm. Excretion A flatworm gets rid of wastes through the same opening it takes in food. Symmetry A flatworm has bilateral symmetry. Appearance A flatworm can be microscopic or many feet long and is generally very thin.