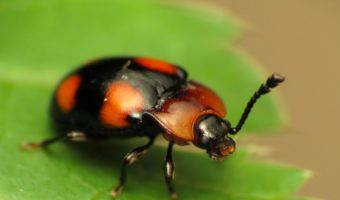 Fungus Beetles (Cypherotylus asperus) belong to the family Erotylidae. The name ‘fungus beetle’ may be applied to several closely-related groups of beetles. The most commonly encountered ‘fungus beetles’ are the ‘Silken Fungus Beetles’ and the ‘Minute Brown Scavenger Beetles’. As its common name implies, Fungus Beetles feed on a wide variety of fungi.

Fungus beetles feed on mold or mildews and are attracted to anything that is musty smelling. Moisture levels in new buildings will often attract these insects. Fungus Beetles are harmless, but small enough to get through most screening, vents and other openings. They can be found flying around in homes during late summer.

Fungus Beetles are small red/orange and black. Some of these beetles show a bright blue or green color against the primarily black shell and some of these beetles are entirely brown or black. In the southeastern United States, most of these beetles are black with a simple red hood, however, a few species in that area are much more elaborately patterned. Since several simaliar beetles share this same color pattern, other characteristics are needed for a proper identification. The various fungus beetles measure from 2 – 5 millimetres in length (1/10 – 1/6 inch). Some Fungus beetles have a clubbed antennae. Some have their bodies covered with dense pubescence and/or dimples – like punctures.

Fungus beetles have a complete metamorphosis (egg- larva-pupa-adult) and the developmental period varies according to the temperature.

at 75 degrees fahrenheit: the life cycle is completed in 25 to 36 days

at lower temperatures: up to 5 months.

It is not uncommon for an egg to pupate within two weeks. During that time, the slow moving larvae are only found within the fruiting body of mature fungi. Adult beetles are known to stray away from their host fungi. When looking for these beetles during unfavourable living conditions, it is advisable to inspect the underside of the bark of dead or rotting trees as for other beetles (Asian lady beetle), these insects can compress themselves to fit in tiny spaces.

Control of Fungus Beetles can be achieved by a combination of three tactics: regulation of moisture and humidity level, elimination of host materials (with fungi) and insecticidal spot treatments.

Excess moisture and humidity is favourable for the growth of fungi and the control of moisture is therefore an important pre-requisite to successful elimination of these beetles. Adequate heating and ventilation (even a period of hot, dry weather) can eliminate an infestation.

The source of the infestation may be difficult to locate because the fungi may be located in neglected stored products (grains, yeast, etc.), wall voids (rodent and insect nests), on freshly plastered walls and moldy wallpaper paste, on basement walls, or around moist window cases or plumbing.