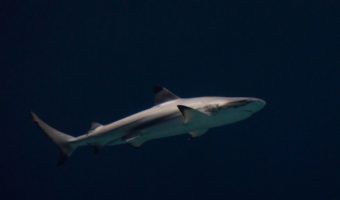 Black tipped sharks feed mainly on a wide range of bony fish including sardines, herring, mullet, jacks and Spanish mackerel, among others. They also feed upon the young of other sharks including dusky sharks and some cephalopods (mollusks) and crustaceans such as lobsters, crabs, shrimp, crayfish and barnacles.

The gestation period is believed to be 10 to 12 months and females are thought to breed every other year. The black tipped shark is viviparous (embryo develops inside the body of the mother, as opposed to outside in an egg) and has a yolk-sac placenta with 1 – 10 pups per litter.

The Black Tipped sharks conservation status is classed as ‘vulnerable’.

The Black Tipped shark is not to be confused with blacktip reef shark.