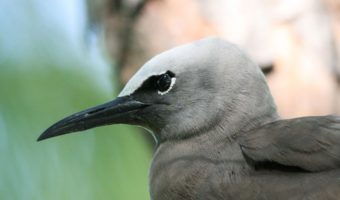 The Brown Noddy Tern or Common Noddy Tern (Anous stolidus) is a tropical seabird from the tern family. The largest of the noddies, it can be distinguished from the closely related Black Noddy by its larger size and plumage, which is dark brown rather than black. Brown noddy terns have a greyish-white cap. The Brown Noddy Tern is another interesting seabird which can be encountered in the Galápagos Islands of Fernandina, Baltra and Wolf.

One of its most interesting qualities is that noddies perch on the heads of brown pelicans attempting to capture any fish that escaped from the bill of a fishing pelican.

Although by seabird standards, the noddy tern is a medium sized bird, it is still a surprisingly large bird to be perching on the head of a pelican.

The sooty tern, a close relative of the noddy tern, also lives in the Galápagos, however, because of its small local population, it is rarely seen. 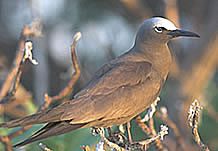 Noddy birds actually nod at each other as part of their courtship rituals. The Brown Noddy Tern is colonial, usually nesting on the in elevated situations on cliffs or in short trees or shrubs. The Brown Noddy Tern only occasionally nests on the ground. A single egg is laid by the female of a pair each breeding season.

The Brown Noddy Terns are often unwary and find safety in enormous numbers. To sailors, they were well known for their apparent indifference to hunters or predators.

Noddies are reportedly a dietary staple on the island of Nauru (an island nation in the Micronesian South Pacific).