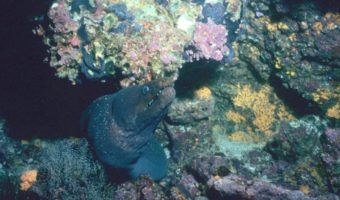 There are at least 16 species of moray eels in Galapagos. As well as the Moray Eels, there are other Eel species that inhabit the Galapagos waters. Some are endemic to the islands.

lapagos Garden Eel (Heteroconger cobra) is a member of the conger family, Congridae. The Galapagos Garden Eel measures around 70 centimetres in length and lives in tropical waters with a depth range of between 10 and 30 metres. It is distributed around the Galapagos waters in the southeast pacific and can be observed while diving or snorkeling off the south shore of Rabida Island and off Santa Cruz island.

The Zebra Moray Eel (Gymnomuraena zebra) is a species of saltwater eel and can be found in indo-Pacific waters including the Galapagos Islands. The Zebra Moray Eel can grow to measure up to 1.5 metres in length. The Zebra Moray Eel has close-set pebble-like teeth used for crushing hard-shelled prey and a rounded snout. It is a secretive inhabitant of sandy and rocky bottoms, crevices and ledges of seaward reefs.

The Zebra Moray Eel feeds primarily on xanthid crabs (also known as coral crabs due to their association with coral reefs), however, it also feeds on other crustaceans, molluscs and sea urchins. Colouration includes close-set narrow dark bands like zebras, hence its common name.

The Speckled Moray Eel or Griffins Moray Eel (Gymnothorax dovii) has a depth range of around 100 metres, Their length is between 40 and 200 centimetres. The Speckled Moray Eel is a very elongate scaleless fish with a blunt head and large mouth full of prominent backward facing teeth, hinged so that they can fold back but lock when prey tries to struggle free.

The open-mouthed stance is not aggression – morays need to continuously draw water through their small gills and in fact this is actually a timid fish despite its huge size and ferocious appearance. The Speckled Moray Eels are active mostly at night but move about during the day if the smell of food entices them. Their diet is made up of crabs, sea urchins and small fish.

The Finless Eel (Apterichtus equatorialis) is a member of the Ophichthidae family and measures around 27 centimetres in length. The Finless Eel is found in the Eastern Pacific, Gulf of California, Panama and the Galapagos Islands. The Finless Eel inhabits sandy and muddy sea bottoms, from shallow waters up to the depth of 125 metres. It is a harmless eel and not classed as endangered.

Most Snake eels (Callechelys galapagensis) have elongate cylindrical bodies with a sharp tail used for burrowing. They have small pectoral fins and low marginal fins. Snake Eels are representatives of the more than 200 species that are found throughout the world, mostly in tropical or temperate waters. These snakelike creatures are more benign than their aggressive relatives, the morays.