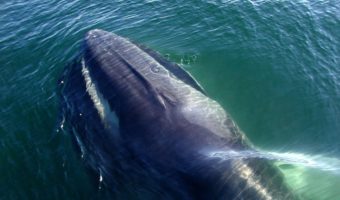 The fin whale (Balaenoptera physalus) is a cetacean belonging to the parvorder of baleen whales. It is also known as the finback whale or common rorqual and formerly the razorback whale. The fin whale is the second largest whale and the second largest living animal after the blue whale. At least two recognized subspecies exist, in the North Atlantic and the Southern Hemisphere.

The fin whale is found in all the worlds major oceans, from polar to tropical waters. This marine mammal is absent only from waters close to the ice pack at both the north and south poles and relatively small areas of water away from the open ocean. The highest population density occurs in temperate and cool waters.

Only few sightings of the fin whale have been confirmed. The best place for an observation would be the western archipelago of the Galapagos. Like all other large whales, the fin whale was heavily hunted during the 20th century and, due to this, the fin whale is an endangered species. The global population of the whale is estimated to range from less than 100,000 to roughly 119,000.

The fin whale was first described by Friderich Martens in 1675 and then again by Paul Dudley in 1725. The word physalus comes from the Greek word physa, meaning “blows”, referring to the prominent blow of the species.

Fin whales are rorquals (members of the family Balaenopteridae) which also includes other species of whale, such as the humpback whale, the blue whale, Bryde’s whale, the sei whale, and the minke whales. DNA evidence indicates the fin whale may be closely related to the humpback whale.

There are hybrid individuals between blue and fin whales with characteristics of both that are known to occur in both the North Atlantic and North Pacific. This is despite the genetic distance between the blue and fin whales being compared to that between a gorilla and a human.

Full physical maturity is not reached until between 25 and 30 years of age. A newborn fin whale measures about 6.5 metres (21 feet) in length and weighs approximately 1,800 kilograms (4,000 pounds). The animal’s large size aids in identification and it is usually only confused with the blue whale, the sei whale or Bryde’s whale.

The fin whale has a brownish grey top and sides and a whitish underside. The head is quite flat and represents about 1/5 of total body length. It has a pointed snout, paired blowholes and a broad, flat rostrum. Two lighter-coloured chevrons begin midline behind the blowholes and slant down the sides toward the tail on a diagonal upward to the dorsal fin, sometimes re-curving forward on the back. The fin whale has a large white patch on the right side of the lower jaw, while the left side of the jaw is grey or black.

The fin whale has a series of 56 to 100 pleats or grooves along the bottom of the body that run from the tip of the chin to the navel that allow the throat area to expand greatly during feeding.

The fin whale has a curved, prominent dorsal fin about three-quarters of the way along the back. This usually measures around 60 centimetres (24 inches). Its flippers are small and tapered and its tail is wide, pointed at the tip and notched in the centre.

An adult fin whale has between 262 and 473 baleen plates on each side of the mouth. Each plate is made of keratin that frays out into fine hairs on the ends inside the mouth near the tongue. Each plate can measure up to 76 centimetres (30 inches) in length and 30 centimetres (12 inches) in width.

Fin whales have a lifespan of around 94 years of age, but specimens have been found aged at an estimated 135 to 140 years.

The fin whale is a cosmopolitan species, meaning it is found in all the world’s major oceans and in waters ranging from the polar to the tropical. The only water it is absent from are close to the ice pack at both the north and south extremities and relatively small areas of water away from the large oceans, such as the Red Sea. However, they can reach into the Baltic Sea.

The highest population of fin whales occurs in temperate and cool waters, and is less densely populated in the warmer waters. They tend to live in coastal and shelf waters but never in water less than 200 meters deep.

Fin whales are migratory and move seasonally in and out of high-latitude feeding areas, but the overall migration pattern is not well understood. Most migrate from the Arctic and Antarctic feeding areas in the summer to tropical breeding and calving areas in the winter. The location of winter breeding grounds is not known. Fin whales travel in the open seas, away from the coast, so they are difficult to track.

The fin whale is a filter-feeder, feeding on plankton and small schooling fish, squid and crustaceans including mysids (shrimp-like creatures) and krill. It feeds by opening its jaws while swimming at a relatively high speed. Its speed causes it to engulf up to 18,000 gallons of water in one gulp. It then closes its jaws and pushes the water back out of its mouth through its baleen, which allows the water to leave while trapping the prey. Each gulp provides the whale with approximately 10 kilograms (20 pounds) of krill.

Fin whales have also been observed circling schools of fish at high speed, compacting the school into a tight ball, then turning on its side before engulfing the fish.

Fin whales fast in the winter while they migrate to warmer waters, but in the summer can consume up to 1,800 kilograms (4,000 pounds) of food a day. This leads scientists to conclude that the whale spends about three hours a day feeding to meet its energy requirements, which is roughly the same as humans. However, if prey patches are not sufficiently dense, or are located too deep in the water, then a whale has to spend a larger portion of its day searching for food. 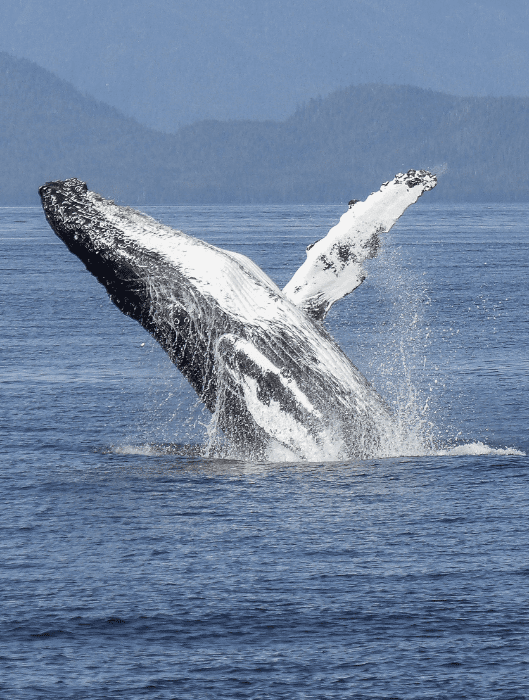 Fin whales are more gregarious than other rorquals and often live in groups of 6 to 10 individuals, although on the feeding grounds groups of up to 100 animals may be observed.

Like other whales, the male fin whale has been observed to make long, loud, low-frequency sounds. The vocalizations of blue whales and fin whales are the lowest known sounds made by any animal, ranging from 16 to 40 Hz, which is outside of the hearing range of humans. Each sound lasts one to two seconds, and various sound combinations occur in patterned sequences lasting 7 to 15 minutes each. Fin whale songs can penetrate over 2,500 m (8,200 ft) below the sea floor and seismologists can use those song waves to assist in underwater surveys.

The highest population density occurs in temperate and cool waters. The fin whale is less densely populated in the hottest, equatorial regions. It prefers deep waters beyond the continental shelf to shallow waters.

When travelling or resting, the fin whale will blow every minute or two, but when feeding, they will blow 5 to 7 times in quick succession. When the whale surfaces, the dorsal fin is visible soon after the spout. Their spout is vertical and narrow and can reach heights of 6 metres. The fin whale will blow one to several times on each visit to the surface, staying close to the surface for about one and a half minutes each time.

Their tail remains submerged during the surfacing sequence. The fin whale then dives to depths of up to 250 metres (820 feet), each dive lasting between 10 and 15 minutes. Fin whales have also been known to leap completely out of the water.

Mating occurs in temperate, low-latitude seas during the winter and the gestation period is eleven months to one year. Fin whales are seen in pairs during the breeding season and are believed to be monogamous. A male will chase a female while emitting a series of repetitive, low-frequency vocalizations. These sounds travel far, which is important because fin whales do not have specific mating grounds and must communicate to find each other.

Females reproduce every 2 to 3 years, with as many as 6 calves being reported, however, single births are far more common. The gestation period is 11 to 11.5 months. Calves are precocial at birth and able to swim immediately after. They are normally born at an average length of 6 meters and weighing 3,500 to 3,600 kilograms.

Since the calf does not have the ability to suckle like land mammals, the mother must spray the milk into the mouth of the baby by contracting the circular muscles at the base of the nipple sinus. Feeding takes place at 8 to 10 minute intervals throughout the day. A newborn weans from its mother at 6 or 7 months of age when it is 11 or 12 metres (36 to 39 feet) in length, and the calf follows the mother to the winter feeding ground.

Female fin whales reach sexual maturity at between 3 and 12 years of age. Calves remain with their mother for around one year. 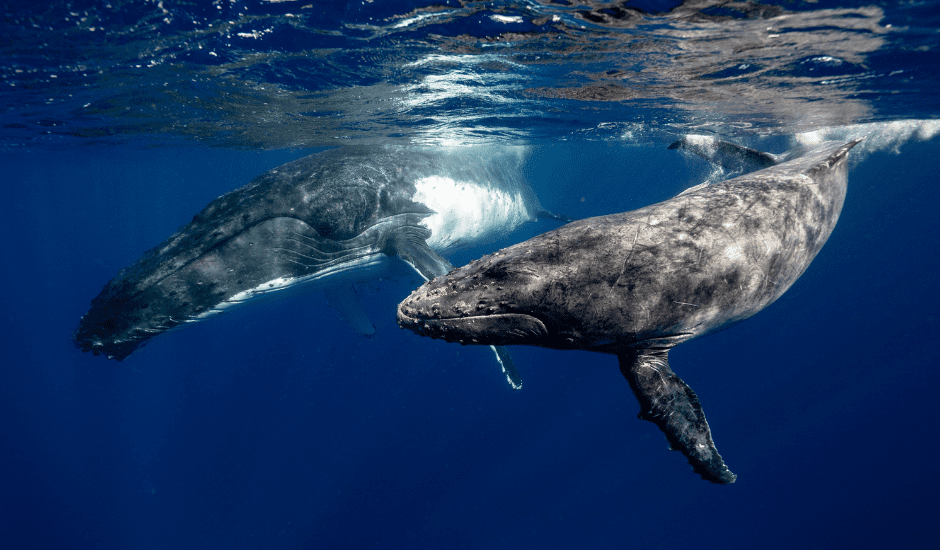 Fin whales are listed as ‘endangered’ on the IUCN Red List. Their global population is estimated to be between 100,000 to 119,000. The biggest reasons for the decline in their population are fishing, whaling, vessel strikes and climate change.

Whaling is the largest cause of declining fin whale populations. The fin whale was heavily hunted during the 20th century, with over 725,000 fin whales reportedly taken from the Southern Hemisphere between 1905 and 1976. As of 1997 only 38,000 survived.

Historically, fin whales were hunted for their oil and blubber, as well as their baleen. Aboriginal peoples have hunted fin whales for centuries and all parts of the whale were integral in their lives as a source of food, fuel, and building materials. The International Whaling Commission (IWC) issued a ban on commercial hunting of the fin whale in 1986, although Iceland and Japan have resumed hunting.

Fin whales are injured or killed in vessel collisions, too. This is especially true in the Mediterranean Sea where collisions are a significant source of fin whale mortality. Between 2000 and 2004, 5 fatal collisions with vessels were recorded off the east coast of the United States.

Fishing gear also kills fin whales, with entanglement resulting in at least one death per year. Fishing accidents have killed 4 fin whales in the years 2000 to 2004.

A study done on whale calls shows that human sound can also interfere with whale populations, because it can prevent mating. Since the whales use low frequency sounds to call to females, human interruption through sound waves, such as military sonar and seismic surveys can disrupt the signal sent to the females. This potentially can result in mates not meeting and a reduction in birth rates in populations.

Climate change is affecting whale populations as it has a direct effect on oceanographic conditions. As the conditions of the sea change, so does prey distribution could lead to changes in foraging behavior, nutritional stress, and diminished reproduction for fin whales. Temperature changes also affects the timing of environmental cues important for navigation and foraging in fin whales.

Fin whales suffer from a number of pathological conditions. Parasites can burrow into their blubber to feed on their blood and attach themselves to their fins. Worms and barnacles can also cause health issues within fin whales.

Fin whales have natural predators in the ocean, despite their size. The only known predator of the fin whale is the killer whale, with at least 20 eyewitness and second-hand accounts of attack or harassment. However, only a few confirmed fatalities have occurred. Orcas usually attack a fin whale in groups and feed on its carcass once it has been killed.

The fin whale is important to the ecosystem because it helps to control plankton levels through its diet. Their carcasses also support communities of benthic animals as they fall to the ocean floor and are consumed. Fin whales host large communities of parasites, such as barnacles, lice, and worms, too.