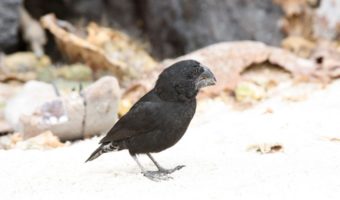 Here are the names of all 14 of Darwin’s Finches. They are divided into 4 groups:

(Vampire Finch – sub species of above)

Although Darwin’s Finches are divided into these groups, they are very much alike in coloration, size and habitat. The only difference between them is the size and shape of their beaks. It is the differently evolved beaks that characterize these amazing birds. The finches all evolved from a single species called the Blue-Black Grassquit Finch (Volatinia jacarina) which was found along the Pacific coast of South America.

Once they settled on the Galapagos Islands, the finches adapted to their habitat and the size and shape of their beaks reflect their specializations.

Vegetarian Finch and Ground Finch all have crushing beaks while the Tree Finch have a grasping beak. The Cactus Finch, Warbler Finch and Woodpecker Finch all have probing beaks. This is how they are distinguished into their separate groups.

Below is an illustration displaying 4 types of finches with 4 diffrent beak shapes.

Click HERE for a larger image which may be printed for educational use. (Opens in new window).

Over many years, the finches beaks have evolved to suit their eating habits. For example, seed and fruit eaters have claw-like beaks to grind and crush their food, while grub eaters have longer, thinner beaks to poke into holes to attain their food.

Darwin’s Finches vary by what they eat, some eat seeds and others eat insects. The Ground Finches eat ticks which they remove with their crushing beaks from Tortoises, Land Iguanas and Marine Iguanas and they kick eggs into rocks to feed upon their contents. On one Galapagos Island (Isla Wolf) the Vampire Finch, a sub species of the Sharp Beaked Ground Finch, jumps on the backs of other birds such as Masked Boobies and Red-footed Boobies and peck away at their flesh to feed on their blood. The booby birds do not resist against this eating behaviour. It is thought that this behaviour evolved from the pecking behaviour that the finch used to clean parasites from the plumage of the booby birds. The Vampire Finch is an endangered species.

Woodpecker and Mangrove Finches use small twigs and cactus spines as tools to dine on the larva stored in dead tree branches.

Although they have adapted to allow for specialized feeding, most Finches are generalized eaters. The specialized feeding developed allowing the birds to survive during the dry season or times of drought when little food is available.

These specialized tools allow the birds a better advantage when they compete for food sources with other birds and animals.

Finches generally mate for the first time at the age of 1 year old. However, it has been recorded that there was a breeding of two species of Darwin’s finches on the Galapagos Islands at the age of 3 – 6 months.

Reproduction of Darwin’s finches is closely associated with rainfall. Since rainfall on Galapagos is very variable, birds have been found breeding at many times of the year.

Very little is known about the reproduction of the 14 species of Finches on the islands, however, rain seasons and food production are known to effect their breeding cycles. The Finches are thought to hatch eggs on a 2 – 3 year cycle.