The Flightless Cormorant (Phalacrocorax harrisi), also known as the Galapagos Cormorant, is a cormorant native to the Galapagos Islands and an example of the highly unusual fauna there.

The Flightless Cormorant is unique in that it is the only cormorant that has lost the ability to fly.

Once it was placed in its own genus, Nannopterum or Compsohalieus, although current taxonomy places it in the genus with most of the other cormorants, Phalacrocorax.

With only 1500 estimated individuals, it is one of the worlds rarest birds and is the subject of an active conservation programme.

Like all cormorants, this bird has webbed feet and powerful legs that propel it though ocean waters as it seeks its prey of fish, eels, small octopuses and other small creatures. Flightless Cormorants feed near the bottom and no more than 100 metres offshore.

The Flightless Cormorant is the largest member of its family. It measures 89 – 100 centimetres (35 – 40 inches) in length and weighs 2.5 – 5.0 kilograms (5.5 – 11 pounds). Its wings are about one-third the size that would be required for a bird of its proportions to fly. The keel on the breastbone, where birds attach the large muscles needed for flight, is also greatly reduced.

The upperparts are blackish and the underparts are brown. Their long beak is hooked at the tip and the eye is turquoise. Like all members of the cormorant family, all four toes are joined by webbed skin. Males and females are similar in appearance, although males tend to be larger. Juveniles are generally similar to adults but differ in that they are glossy black in colour with a dark eye. Adults produce low growling vocalisations.

This unique cormorant is endemic to the Galapagos Islands, Ecuador, where it has a very restricted range. The Flightless Cormorant is found on just two islands: Fernandina, where it is found mainly on the east coast, as well as on the northern and western coasts of Isabela. The population of Flightless Cormorants has undergone severe changes. The 1983 El Nino event resulted in a 50% reduction of the population to just 400 individuals. The population recovered quickly, however, and was estimated to number 900 individuals in 1999.

The Flightless Cormorant inhabits the rocky shores of the volcanic islands on which it occurs. It forages in shallow coastal waters, including bays and straits and rarely ventures further than one kilometre from the breeding areas. 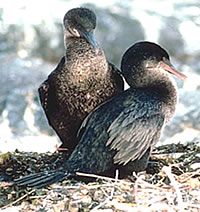 Nesting occurs during the coldest months (July – October), when marine food is at its most abundant and the risk of heat stress to the chicks is reduced. At this time, breeding colonies form consisting of around 12 pairs. The courtship behaviour of this species begins in the sea. The male and female swim around each other with their necks bent into a snake-like position.

The Flightless Cormorants then move onto land. The bulky seaweed nest, located just above the high-tide mark, is augmented with ‘gifts’ including items such as rope and bottle caps, which are presented to the female by the male.

The female generally lays three whitish eggs per clutch, though usually only one chick survives. Both male and female share incubation. Once the eggs have hatched, both parents continue to share responsibilities of feeding and brooding (protecting the chicks from exposure to heat and cold), but once the chicks are old enough to be independent and if food supplies are plentiful, the female will leave the male to carry out further parenting and she will leave to find a new mate. Females can breed three times in a single year. Although their population size is small, Flightless Cormorants can recover fairly quickly from environmental disasters.

The Flightless Cormorant evolved on an island habitat that was free of predators. Having no enemies and taking its food primarily through diving along the food-rich shorelines, the bird eventually became flightless. However, since their discovery by man, the islands have not remained free of predators. Cats, dogs and pigs have been introduced to the islands over the years. In addition, these birds have no fear of man and can easily be approached and picked up.

The fact that this uniquely adapted bird is found in such a small range and in such small numbers greatly increases its vulnerability to chance events such as environmental disasters (especially oil pollution), extreme climatic events and the introduction of diseases or predators. Unfortunately, marine perturbations such as those caused by El Niño* events are becoming increasingly extreme. Still, its ability to breed quickly can allow it to recover from disasters as long as the population remains above the critical level.

Because of these factors, the Flightless Cormorant is one of the worlds rarest birds. A survey carried out by the Charles Darwin Research Station in 2004 indicated that the species now has a population of about 1,500 individuals.

All populations of this species are found within the Galapagos National Park and Marine Reserve.