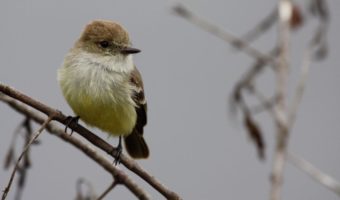 The Galapagos archipelago is located about 1,000 km from continental Ecuador in South America and is composed of 127 islands. The Galapagos flycatcher is present on all the main islands, while the vermillion flycatcher can be seen on the uninhabited islands of Fernandina Island, Isabela Island, Santa Cruz Island and Rabida Island.

The little vermillion flycatcher was first discovered in Galapagos during Charles Darwin’s voyage on HMS Beagle, and from Darwin’s specimens two endemic subspecies were identified: P.r.nanus, found on all islands but San Cristobal, and P.r.dubius, found only on San Cristobal. The subspecies P.r.dubius has not been recorded since the 1980s and is now considered extinct. Recently, the little vermillion flycatcher was recognised as a full species P. nanus. 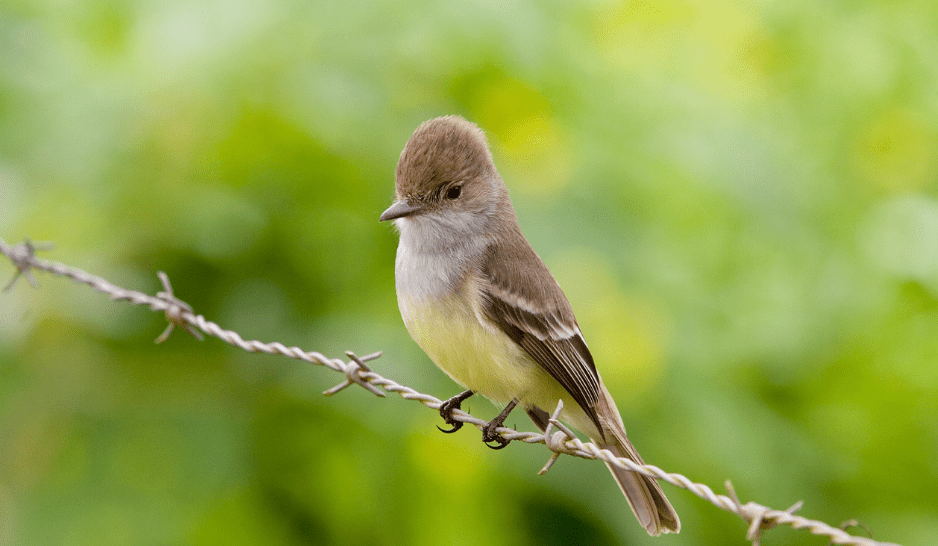 The Galapagos flycatcher is the smallest member of the genus Myiarchus. It measures between 15 to 16 cm (5.9 to 6.3 in) in length and weighs between 12 and 18.5 grams. Their upper plumage is dull brown, except for the lower part of the back and tail. The plumage below is brownish-yellow ranging to orange, and their throat is whitish. They have big dark eyes and feathered crests at the top of their heads that can either be ruffled out or swooped back.

Both the legs and feet of these birds are brown-black colored. The Galapagos flycatcher also has a thick snout bill, which is what gives it the alternate name of the large-billed flycatcher.

Males and females look alike, although young birds have rufous edgings to their wings and tail.

The little vermillion flycatcher has an average size of 13 centimetres and an average weight of 12 grams. The males and females look very different; males have a striking red plumage, with black wings and eye markings, while the females are much harder to spot with their grayish color and peach-colored breast. In the Galapagos, the male vermilion flycatcher is the only truly bright land bird. 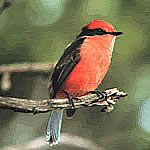 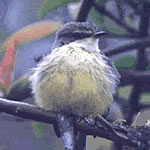 They have a short, wide beak, sometimes with hooked tips which are good for catching and holding onto flying insects.

The diet of the Galapagos flycatching birds consists of insects. Using their short, but wide beaks, they’re able to catch flying insects, such as dragonflies, bees and wasps, to eat as they move around tree perches. They also eat caterpillars, larvae, other sedentary arthropods, and fruits.

This Galapagos flycatcher is a bold and curious bird, that is not afraid of humans. In fact, they will approach humans very closely without being frightened and even perch on your head!

These birds sing a lot, and produce a variety of high-pitched, squeaky sounds. Their song begins with a ‘whey-bur’, which is followed by multiple ‘huit’ noises.

Despite this, they are solitary birds and spend life alone or in breeding pairs. Galapagos birds are also very territorial birds, which means that their nests cannot be too close to each other.

The Galapagos flycatching birds breed throughout the year, but most commonly the breeding season is between January and March, which is the hot and humid season. However, some may nest as early as November or as late as May.

Their nests are constructed with vegetable matter and are usually placed in trees or cacti. They are then lined with soft plant material, feathers (such as chicken feathers), feather down and hair. Breeding birds have been known to pull hairs from animals to construct their nests, and sometimes even humans! Because they are territorial, there is at least 328 ft (100 m) distance between the nests of these birds.

Galapagos flycatching birds will lay a clutch of between 3 and 6 brown-marked buff eggs. Once hatched, the young flycatchers will leave the next when they are around 13 days old. 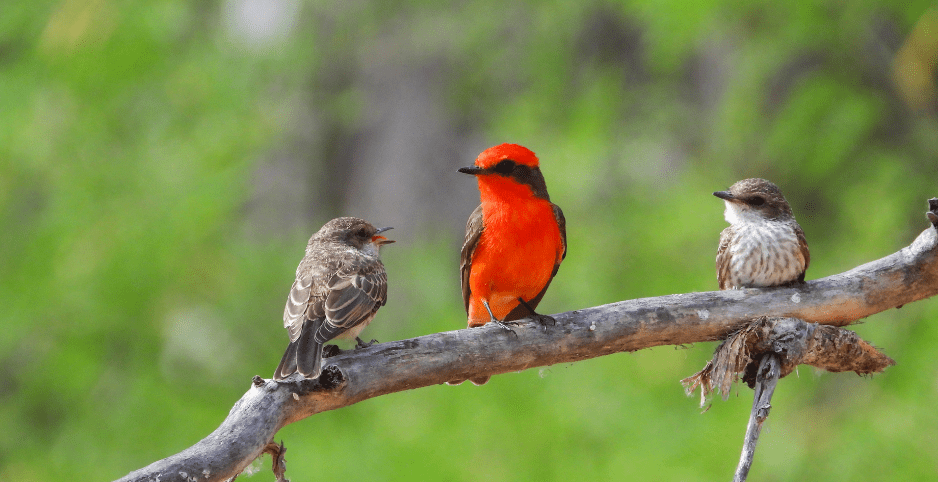 The birds can primarily be found in tropical dry forests and tropical arid shrubland with cacti. They are mostly resident and non-migratory.

During the hot, wet season between December and March, they build their nests high above the ground, usually in holes of trees or cacti.

The Galapagos flycatcher bird is listed as least concern and is not currently an endangered species. That being said, its population is decreasing. The little vermilion flycatcher is listed as Vulnerable on the IUCN Red List.

The main threat to these birds are overgrazing, habitat destruction due to fires, diseases and even predation.

There are six families of flycatchers.