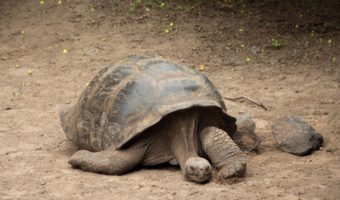 The Galapagos Giant Tortoise can live for more than 100 years, the oldest recorded tortoise being 152 years old.

The Giant Tortoises are thought to belong to just one species, Geochelone elephantopus, with 14 different races or sub-species, four of which are believed to be extinct. Only one male, Lonesome George, of the four extinct races exists. Previously he lived on Pinta Island, but is presently kept at the Charles Darwin Research Station.

It is very sad to inform you that today, 26th June 2012, Staff at the Galapagos National Park in Ecuador announce that Lonesome George, the giant tortoise believed to be the last of its subspecies, has died. Scientists have estimated that he was about 100 years old. Lonesome George became a symbol of the Galapagos Islands, and will not be forgotten. RIP Lonesome George.

It is likely that all the present races of Giant Tortoise evolved in Galapagos from a common ancestor that arrived from the mainland, floating on the ocean currents. Although this seems an incredible journey, it is known that Galapagos Tortoises can float easily in sea water. Only a single pregnant female or one male and one female needed to arrive in this way, and then survive, for Galapagos to be colonised.

The Evolution of the Giant Tortoise

The original ancestor of the tortoises was probably of normal size and evolved into the present-day giants after its arrival in Galapagos. This is due to a phenomenon seen in many island ecosystems where gigantism evolves because there is no longer any need to hide from predators and because there are no other similar animals to compete with for food. Once the tortoises spread around the archipelago, they evolved on their isolated islands into the different races we see today, some with domed carapaces (shells), and others with saddleback carapaces. The unusual saddle shape is believed to have evolved several times on different islands, showing that it must be a very successful design for life in Galapagos.

There are only 15,000 tortoises left on the islands today, the different sub-species scattered around the different islands, whereas there used to be around 250,000.

Galapagos tortoises are herbivores which means they do not eat meat, only vegetables. Their diet consists mostly of cactus, fruits, vines, grasses and other vegetation. Tortoises can store food and water very efficiently and for a very long time. This means that they are able to go without eating or drinking for up to one year.

Giant Tortoises can also survive for long periods of time being forcefully deprived of all liquids, by breaking down their body fat to produce water.

Like other reptiles, Galapagos tortoises are cold-blooded animals. They spend much of their day soaking up the sun to warm themselves. When the sun goes down and the temperature cools, tortoises sleep partially submerged in mud, water or brush to keep warm. Tortoises are extremely peaceful creatures.

The tortoises are slow-moving reptiles with an average long-distance walking speed of 0.3 km/h. However, although feeding giant tortoises move about slowly, browsing with no apparent direction, if they have a purpose, such as moving to water or nesting grounds, they can move with surprising speed and determination given their size. Marked individuals have been reported to have traveled 8 miles in 2 to 3 days.

Tortoises have a classic example of a mutualism symbiotic relationship with some species of Galapagos finch. The finch hops in front of the tortoise to show that it is ready and the tortoise then raises itself up high on its legs and stretches out its neck so that the bird can reach ticks on its skin, therefore freeing the tortoise from harmful parasites and providing the finch with an easy meal. Other birds, including Galapagos Hawk and flycatchers, often use tortoises as observation posts from which to sight their prey.

Mating occurs at any time of the year although it does have seasonal peaks, usually between January and August. When two mature males meet in the mating season, they will rise up on their legs and stretch up their necks to assess dominance. The shorter tortoise will retreat leaving the taller, larger tortoise to mate with the female. In groups of tortoises from mixed island populations, saddleback males have an advantage over domebacks. Frustrated non-dominant males have been observed attempting to mate with other males and boulders.

The male tortoise bellows loudly and bobs his head to attract a female. The male then rams the female with the front of its shell and nips her exposed legs until she draws them in, immobilizing her. Mating may last for several hours and the males may ‘roar’ hoarsely. Males have a concave base to their shell and mount the females from behind. It brings its tail which houses the penis into females cloaca.

After mating (between June and December), the females journey several kilometres to reach nesting areas of dry, sandy ground (often near the coast). Nest digging is an elaborate task and takes several hours sometimes spread out over several days. It is carried out blindly using only the hind legs to dig a 30 centimetre deep hole, in which it lays two to sixteen hard-shelled eggs the size of tennis balls (the number varies with population). The female makes a muddy plug for the nest hole out of soil mixed with urine and leaves the eggs to incubate.

The young emerge from the nest 120 to 140 days later (between December and April) and may weigh only 80 grams and measure 6 centimetres. Temperature plays a role in the sex of the hatchling: if the nest temperature is low, more males will hatch; if it is high, more females will hatch. When the young tortoises emerge from their shells, they must dig their way to the surface, which can take up to one month. Hawks are probably the only native predator of the tortoise hatchlings.

Sex can be determined when the tortoise is 15 years old, and sexual maturity is reached at 20 to 25 years old. The tortoises grow slowly for about 40 years until they reach their full size.

The activity cycle of the Giant Tortoise

*Spend most of time foraging

* They tend to nap half submerged in mud or water

* Most traveling is done early morning or late afternoon

* They retire early and stay in the same spot until sunset

I am me, Lonesome George, slow and old,

I’ve lived my life, I’ve loved it all,

I’ve walked these lands, know of it all,

Don’t judge my later years, I’ve been so frail,

I’ve seen so much, I’ve made many friends,

I leave you now, my time has come,

I will always be with you.