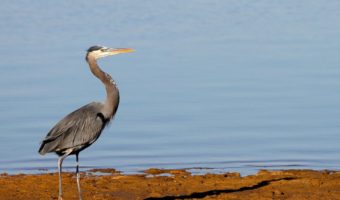 The Great Blue Heron (Ardea herodias) is a very interesting bird. It is a member of the Ardeidae family as are all other herons. All members of the family Ardeidae have specialised feathers called powder down. These feathers never moult but fray from the tip and grow continuously from the base.

While pigeons have similar feathers all over their bodies, in herons, these are concentrated in patches. The fine powder that is generated as these feathers fray is used by the bird to remove slime and oil from their feathers.

Another heron feature is their 4 long toes, 3 pointing toes forwards and one backwards. The claw on the middle of the forward toes has a rough, comb-like inner margin that the heron uses to preen its soft feathers. The Great Blue Heron is overall grey-blue, huge, tall and a wader.

The Great Blue Heron has a blue-grey color on its belly, bod and wings. The birds beak is yellow, long, thick and sharp. Their shoulders are black and its back is mainly a slate-grey color and It has a brownish-buff colored neck. The front of its neck is white with a vertical streak that is black. The birds head is white with a black stripe above its eye. The Great Blue Heron weighs anywhere from 5 to 8 pounds (2 to 3 kilograms).

A male and female heron generally have the same description. It is a huge long-necked, long-legged wader with a thick yellow beak. It holds its neck in an ‘S’ shape both while in flight and while at rest.

The Great Blue Heron will often stand motionless waiting for fish to swim by. It feeds in shallow water or at the waters edge and spears fish or frogs with its long, sharp bill. Its varied diet can also include insects, snakes, turtles, rodents and small birds. It will also raid goldfish ponds in back yards. The Great Blue Heron also eats Lava Lizards and young Marine Iguanas.

The Great Blue Heron usually breeds in colonies in trees close to lakes or other wetlands, often with other species of herons. It builds a bulky stick nest. The female lays 3 to 5 pale blue eggs. Both parents feed the young at the nest by regurgitating food.