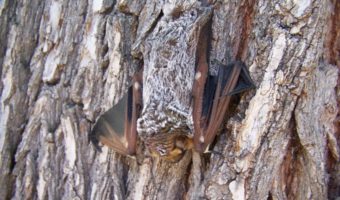 The hoary bat (Lasiurus cinereus) is a species of bat in the vesper bat family, Vespertilionidae. It is the most widespread of all bats in the United States and, though not yet recorded in Alaska, these bats are thought to occur in all 50 states. They also live in both Central America and South America, and are the only bats found in Hawaii.

The hoary bat was described as a new species in 1796 by Palisot de Beauvois. It belongs to the order Chiroptera and the genus Lasiurus.

Because the hoary bat is so widespread, they are not considered dangerous and are listed as Least Concern by the IUCN. 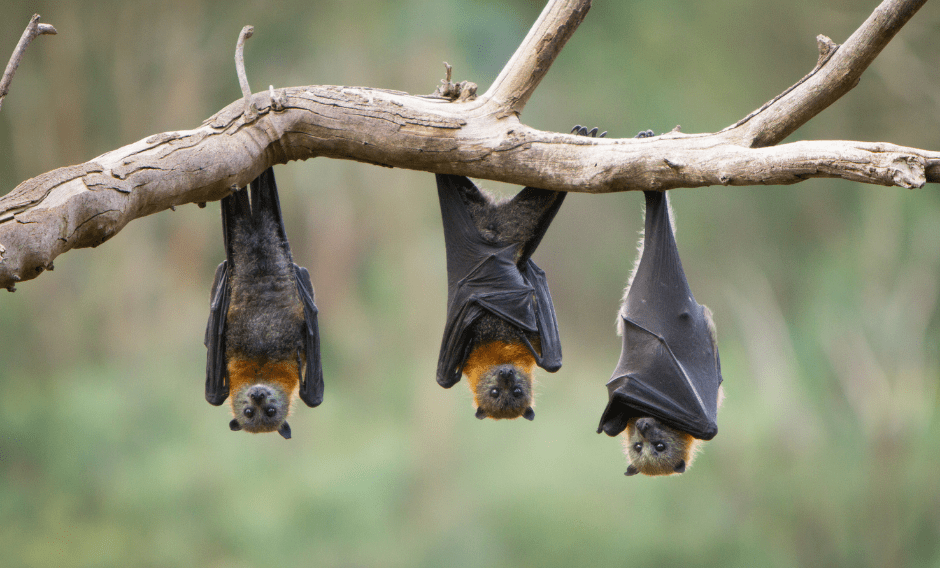 The hoary bat is a large bat species that averages 13 to 14.5 centimetres (5 to 5.7 inches) long with a 40 centimetre (15.7 inches) wingspan and a weight of 26 grams (0.9 ounces). Females are usually heavier than males. It is the largest bat normally found in Canada and Chile.

With the major exception of the underside of the wing most of the bat is covered in fur. Its coat is of a dark brown color with white tips to the hairs that give the species its ‘hoary’ frosting appearance for which it is named.

They have blunt, rounded noses and small, beady eyes, and their ears are short, thick, broad, and rounded. The bat has a distinctive yellowish-brown collar under its chin and the ears are yellowish in color and edged in black. They also have large, strong teeth.

The average life span of a hoary bat is thought to be between 6 and 7 years.

Hoary bats generally prefer to eat moths and beetles, but are also known to consume mosquitoes during periods of high abundance. They will also eat small wasps, flies, grasshoppers, dragonflies, and termites. They may also feed on grass and leaves. Hoary bats use echolocation to locate their prey and are one of the few creatures in the world to do so.

While the hoary bat prefers woodland and mainly coniferous forests for roosting, they hunt over open areas or lakes, as well as the tree tops, along streams. They approach their prey from behind, taking the abdomen and thorax in their mouth and biting off and swallowing this area of the insect, while dropping the wings and head.

The hoary bat is mainly solitary and only forms groups during migration and the mating season. Mothers and her young will be seen together and, occasionally, they can be seen forming groups when hunting for insects. They roost 3 to 5 m above ground during the day and reach their peak activity at about five hours after sunset. They fly directly and can reach speeds of thirteen miles/hr, and stop to rest between meals at night.

Hoary bats are highly territorial, choosing feeding sites which they return to night after night. These bats wrap their hairy tail membrane around their curled up bodies for insulation while resting during harsh weather conditions.

When disturbed while resting, the hoary bat makes a sharp hissing sound. They also make an audible chattering during flight. The Hoary Bat as well as the Galapagos Red Bat is an insectivore that flies all around but is larger and with a beautiful red fur with white tips. 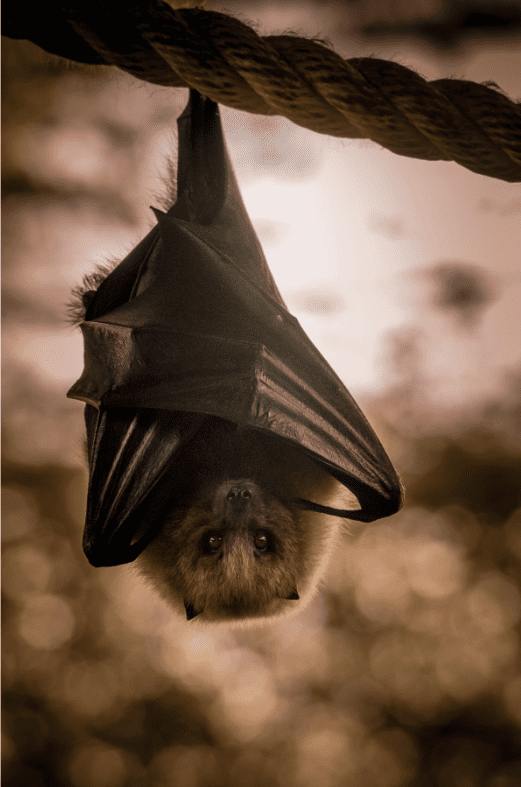 The hoary bat is thought to occur in all 50 states in North America, and is the only bat found in Hawaii. They are also found in Canada, as Central America and South America, including Venezuela, Colombia, Bolivia, Uruguay, Central Chile, Paraguay, Central Argentina, Brazil, Guatemala, Mexico, Panama and the Galapagos Islands.

Hoary bats in live in trees and are thought to prefer trees at the edge of clearings. However, they have also been found in heavy forests, open wooded glades, and shade trees in more urban environments. They rely on their fur to keep themselves camouflaged.

The reproductive cycle of the hoary bat is not yet fully known but it is thought that they mate in August, around the autumn migration, with birth occurring in June of the following year.

Copulation is followed by delayed fertilization, a process in which the sperm is stored in the female reproductive tract all winter and is available to fertilize the egg when ovulation takes place in the spring. It is thought to have a gestation period of only 40 days and litter size ranges from 1 to 4 and the young spend about one month with the mother before being able to fend for themselves.

Most females have been found rearing young in deciduous trees, while males seem more likely to also roost in conifers. Both tend to prefer older trees which apparently provide greater safety, and which they use for up to 5 weeks. Most roosts are 11.5 to 40 feet above the ground, some up to 65 feet, with mothers and young usually roosting higher than solitary adults.

Hoary bats give birth to their young while hanging upside down. The newborns are born with their ears and eyes closed, and they open at three and twelve days respectively. Juveniles appear nearly grayish, but still have a frosty appearance. The young cling to the mother in the day, while she sleeps, and hang on a twig or leaf while she hunts at night.

Hoary bats are long-distance migrants, and migrates to warmer areas during the winter. They often spend the winter in Central America and the southwestern United States and the spring and summer in more northern latitudes in the United States and Canada. They are believed to migrate through Florida from late October to late November and from February through early May.

During their return to North America, females start their flight a month before the males. Some are believed to remain in the north and hibernate for the winter, rather than moving south of the United States like most do. 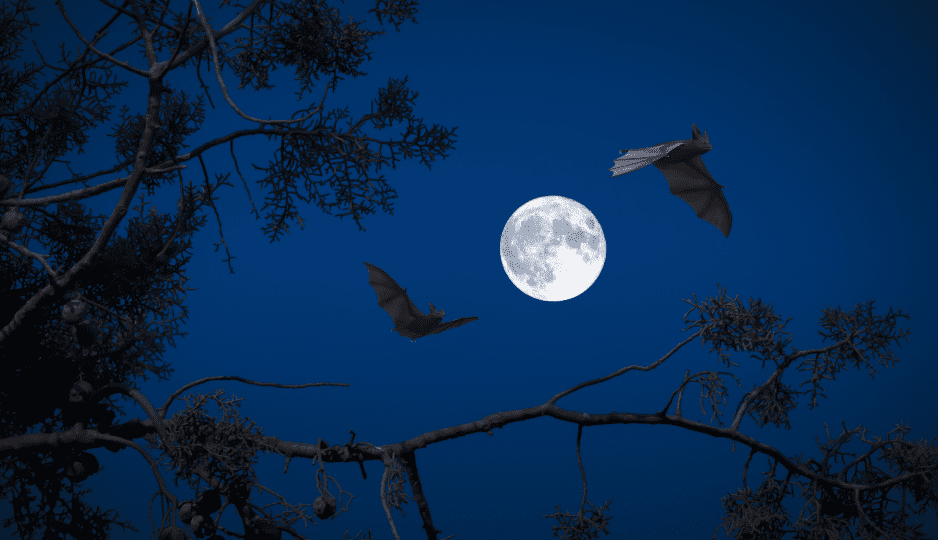 It is difficult to know about the life history of this bat because it is such a solitary animal. That being said, the hoary bat is widespread and listed on the IUCN Red List as Least Concern. However, one subspecies, the Hawaiian hoary bat (Lasiurus cinereus semotus), is listed as endangered by the U.S. Fish and Wildlife Service.

One of the biggest threats to the hoary bat population is loss of habitat due to climate change and deforestation.

Hoary bats also suffer significant mortality from wind turbines. Across the United States in 2005, 40% of all bats killed by collisions with wind turbines were hoary bats—over 1000 hoary bats were killed in 2005. It is thought they are attracted to the tall structures and may seem them as places to rest.

Another cause of mortality in these bats is mothers falling out out of their roost with attached young, and thus becoming easy prey.

Owls and hawks are the primary predators of the hoary bat. Rat snakes occasionally feed on them as well, as do American kestrels.

Hoary bats are very important to the ecosystem because they consume insects, and prey on many species that are considered to be pests by humans.