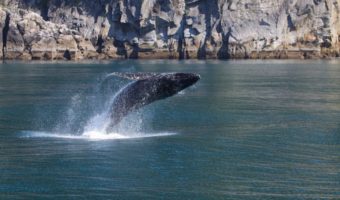 The humpback whale (Megaptera novaeangliae) is a species of baleen whale and is one of the larger rorqual species. Adults range in length from 12 to 19 meters (40 to 70 feet) and weigh approximately 36,000 kilograms (79,000 pounds). The humpback whale is the easiest baleen whale to identify, with a broad rounded head covered with tubercles or knobs.

The humpback whale is found in major oceans and seas around the world. They feed in polar waters, living off krill and small fish, and migrate to tropical or subtropical waters to breed and give birth. These whales are known for being an acrobatic animal, often breaching and slapping the water.

The humpback whale is a target for the whaling industry and was once hunted to the brink of extinction. While the species is now listed as Least Concern by the IUCN Red List, and there are estimated to be around 80,000 individuals worldwide, the humpback whale is still affected by entanglement in fishing gear, collisions with ships and noise pollution 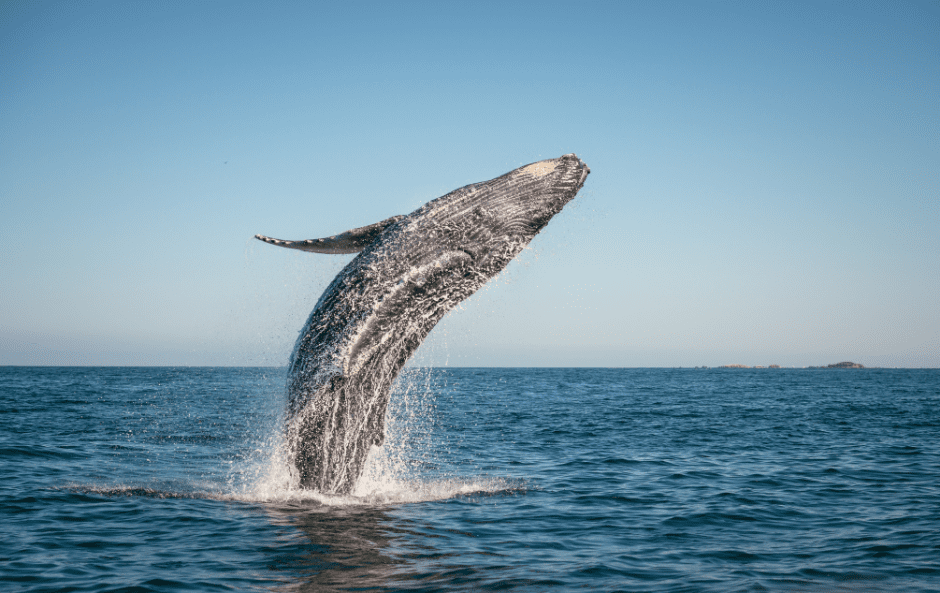 Humpback whales are easily identifiable. They have a stocky body and an obvious hump, which gives them their name. These whales are very large, with fully grown males averaging 13 to 14 m (43 to 46 ft). Females are slightly larger at 15 to 16 m (49 to 52 ft). They usually weigh in the range of 25 to 30 metric tons (28 to 33 short tons), with large specimens weighing over 40 metric tons (44 short tons).

The butterfly-shaped tail fluke have a scalloped trailing edge and can be up to 18 feet wide. They are long and black and white in color, and this tail fin can be up to a third of body length. Tail fluke pigmentation patterns, in combination with varying shapes and sizes of whales’ flukes and/or prominent scars, are unique to each animal. They are distinctive enough to be used as “fingerprints” to identify individuals.

The humpback whale has elongated pectoral fins, which are proportionally the longest fins of any cetacean. The pectoral fins have a row of knuckle-like knobs along their anterior edges are effective weapons in confrontations with killer whales.

Their dorsal fin appears as a hump at the moment when the whale dives. The stubby fin is visible soon after the blow when the whale surfaces, but has disappeared by the time the flukes emerge. Humpbacks have a distinctive 3 meter (10 feet) bushy blow.

Their head and lower jaw are covered with knobs called tubercles, which are hair follicles and are characteristic of the species. They also have 270 to 400 darkly colored baleen plates on each side of their mouths, which measure from 18 in (46 cm) in the front to about 3 ft (0.91 m) in the back.

One of the most distinctive features of these marine mammals are the ventral grooves that run from the lower jaw to the umbilicus, about halfway along the underside of the body. These grooves are less numerous (usually 14 to 22) than in other rorquals, but are fairly wide.

It is unclear whether humpback whales have a sense of smell at all. Their eyes are small and adapted to withstand water pressure.

The lifespan of a humpback whale can range from anywhere between 45 and 100 years.

Humpback whales filter-feed on small crustaceans (mostly krill) and small fish, such as anchovies, herring, sand lance, and sardines. They use several techniques to help them herd, corral, and disorient prey and that can include using bubbles, sounds, the seafloor, and even their pectoral fins. One of their most popular methods is bubble netting, a process in which whales either singly or cooperatively blow a circle of bubbles from under water in order to create a wall or curtain of bubbles that traps small schooling fish and makes them easier to capture in a single lunging gulp through the centre of the bubble curtain.

Humpback whales feed only in summer, in polar waters and migrate to tropical or sub-tropical waters to breed and give birth in the winter. They pend most of their time feeding and building up fat stores (blubber) in the summer so, during the winter, humpbacks fast and live off their fat reserves. Despite this, there is evidence that some individuals engage in opportunistic feeding during migration.

The humpback whale is found in oceans and seas around the world. They live in polar to tropical waters, including the waters of the Artic, Atlantic, and Pacific Oceans, as well as the waters surrounding Antartica and the Bering Strait.

Humpbacks are divided into several populations. These are for the most part isolated, but with a little interchange in some cases. There are two stocks in the north Atlantic Ocean and two in the north Pacific. There are also seven isolated stocks in the southern hemisphere. Some scientists believe that these different populations should be considered subspecies of the humpback whale.

The humpback whale is a migratory species and some individuals travel as far as 8,000 km between their breeding and feeding grounds. They spend their summers in cooler waters, and their winters in tropical waters.

Southern Hemisphere populations generally feed around the Antarctic between November and March, and migrate toward breeding grounds near the equator where they mate and give birth between July and October. Northern Hemisphere populations do the opposite, feeding at high latitudes off the continents of North America and Europe between June and October, and mating and calving at low latitudes in the Caribbean, West Pacific and West Atlantic between December and March or April.

In the North Pacific, some humpback whales migrate from Alaska to Hawaii and they can complete the 3,000 mile trip in as few as 28 days. While calving, they prefer shallow, warm waters commonly near offshore reef systems or shores. Humpback whale feeding grounds are generally in cold, productive waters. 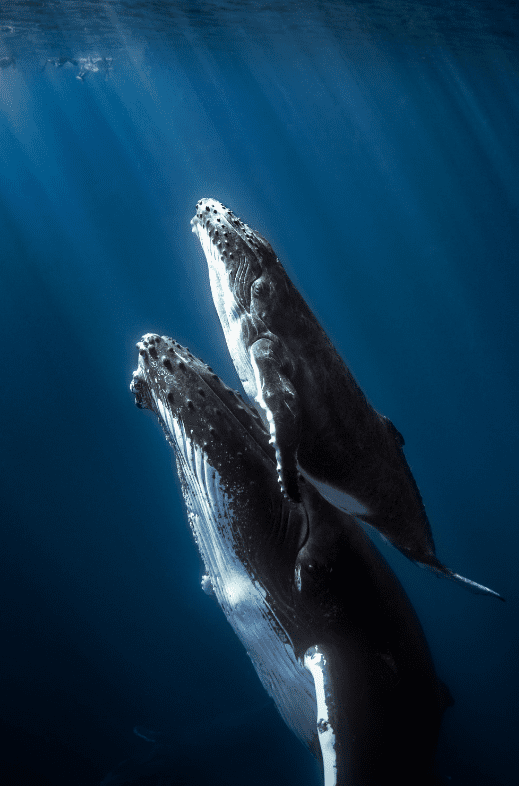 The humpback whales social structure is quite flexible. Usually, individuals live alone or in small groups that assemble and break up over the course of a few hours. Groups may stay together a little longer in summer in order to forage and feed together. Longer-term relationships between pairs or small groups, lasting months or even years, have been observed, but are rare.

Humpbacks are a friendly species that interact with other cetaceans such as bottlenose dolphins. They can also appear in mixed groups with other species, such as the blue, fin, minke, gray and sperm whales.

Occasionally, humpbacks can be aggressive. Protective or aggressive behavior includes body thrashing, horizontal tail lashing, and lobtailing. This aggression may also be directed at boats for coming near the groups. In general, groups of whales are more aggressive than individual whales.

Humpback whales swim around 27 km per hour, but during migration this can become even faster — 3.8 to 14.3 km per hour. Whales with calves swim the slowest, whereas lone whales travel faster than those in groups.

Both male and female humpback whales can produce sounds, however only male humpbacks produce the long, loud, complex songs for which the species is famous. Each song consists of several sounds in a low register (range of a note) that vary in amplitude (measure of a wave) and frequency, and typically lasts from 10 to 20 minutes. Songs may be repeated continuously for several hours. Humpback whales have been observed to sing continuously for more than 24 hours at a time. As cetaceans have no vocal chords, whales generate their song by forcing air through their massive nasal cavities. The purpose of the song is not yet clear, although it appears to have a role in mating.

Whales are air-breathing mammals who must surface to get the air they need. These whales usually dive 6 to 7 m for 15 to 20 minutes at a time. Blows (exhalations) are not regular and flukes are not lifted as the whale dives. However, during a longer dive, the flukes are lifted and they will surface between dives for about 4 minutes, while blowing regularly. Their blow is usually a 3 m (9.8 ft), heart-shaped bushy blow.

The humpback whale does not generally sleep at the surface, but they must continue to breathe. Possibly only half of their brain sleeps at one time, with one half managing the surface-blow-dive process without awakening the other half.

The humpback whale breeding season is in the winter, and takes place in tropical waters. This is usually July to October in the Southern Hemisphere and December to March in the Northern Hemisphere. A pregnant female will swims thousands of kilometers to temperate waters and will arrive earlier than males, non-pregnant females and juveniles.

Their gestation period is 11.5 months, and females produce a single calf. Newborn humpback calves are roughly the length of their mothers head. A 50 foot mother would have a 20 foot newborn weighing in at 2 tons. They are nursed by their mothers for approximately six months, then are sustained through a mixture of nursing and independent feeding for possibly six months more.

Mothers are protective of their calves, swimming closely and often touching them with their flippers. While calves are not believed to maintain long-term associations with their mothers, they are more likely to be found in the same feeding and breeding areas as their mothers. 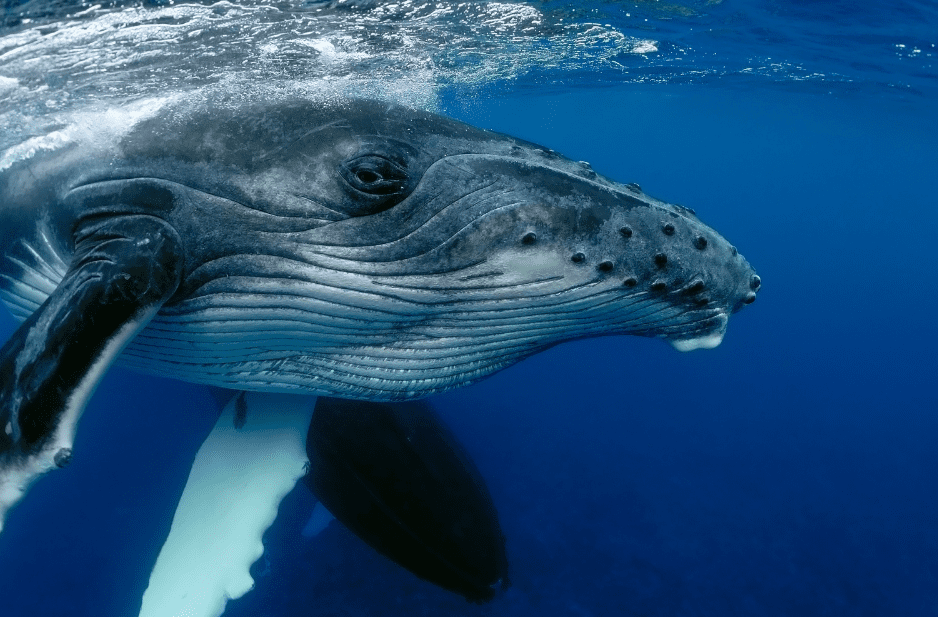 Fortunately, the International Whaling Commission’s final whaling moratorium on commercial harvest, in effect since 1985, played a major role in the recovery of humpback whales. Now, they are listed as Least Concern by the IUCN Red List.

While commercial whaling no longer threatens the humpback whale population, they are threatened by other factors, such as climate change, entanglement with fishing gear, collisions with vessels and excessive noise.

While humpback whales are conservative whales and will not approach boats, there are many reports of them being killed by moving boats. They can also become entangled in moorings, traps, pots, or gillnets. If they are entangled in this gear and unable to move, the whale may drag and swim with attached gear for long distances, which can cause harm or even death.

Climate change is considered one of the biggest threats to whales because, as the climate alters, so will their habitat and way of living. This can affect feeding, breeding, navigation and migration.