Lava Herons (Butorides sundevalli) are endemic (unique) to the Galapagos Islands. They can be mostly observed on the James Bay area of the islands. Lava Herons are small (35 centimetres), grey, dark on wings and back, and orange legs. Lava Herons can be found along the rock shores and mangrove swamps around the islands. The Lava Herons dark grey color blends with the color of lava.

The Lava Heron has evolved to adapt to its environment through its coloring.

The Lava Herons coloring enables it to blend in with its environment and therefore hide from predators. The adults can be very dark and difficult to spot against the lava.

Lava Herons have also been known to eat the flies that gather near cacti. Unlike most herons, these birds nest in solitary pairs in either the lower branches of mangrove trees or under lava rocks.

This heron is sometimes considered a subspecies of the Striated Heron, or even just a color morph of it. However, it is typically maintained as a separate species.

The Lava Heron is so tame, it will let you take photos of it from as close as 8 inches. 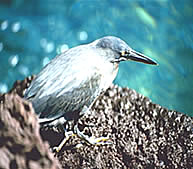 These highly territorial birds are found in intertidal zones and mangrove groves on all of the Galapagos islands. You can often see Lava Herons sitting motionless on lava rocks, waiting patiently to grasp a passing fish with its bill. Lava Herons feed mainly on small fish, crabs and lizards. The Lava Heron stalks small crabs and fish slowly before quickly spearing and eating them.

The adult Lava Heron is slate-grey, which helps it blend in with the hardened lava. The back feathers typically have a silvery sheen and it has a short crest on its head. The feeding behaviour of the Lava Heron is quite impressive, it can catch small crabs at a rate of 2-3 crabs a minute.

Lava Herons are monogamous (only breed with one mate at a time) for the breeding season and engage in elaborate courtship displays. They can breed year-round, though typically from September to March and can mate up to three times a year.

Male Lava Herons obtain bright breeding colors on legs and beaks and some like the Great and Snowy Egrets develop aigrettes, which are spectacular head, neck and scapular plumes. When breeding, the heron has a black beak and bright orange legs, but they fade to grey after the breeding season.

After they formed pairs, females build platform nests of sticks in trees, shrubs or bushes near water while the males gather the necessary materials. Up to 10 eggs are laid and both incubate and the hatching is asynchronous.

Both parents feed the young, which fledge in 4 – 8 weeks. Having been hunted in their past for their meat and in some species like the egrets for their showy feathers, they became almost extinct in some countries but have now recovered their numbers. These birds have no fear of humans.