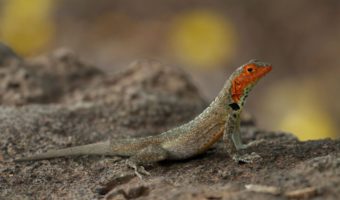 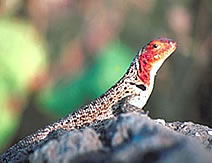 Galapagos Lava Lizards (Microlophus albemariensis) are the most abundant reptile on the Galapagos Islands. Lava Lizards have attitude and like most of the Galapagos animals, they have a relative lack of fear of humans and can be observed quite closely. Lava Lizards can grow to be upto a foot in length, but are usually about 5 – 6 inches long.

Lava Lizards colors vary and some can be quite beautifully colored from mottled grey to speckled copper or black with gold stripes. The male Lava Lizard looks quite different from the female whereby it is larger in size and more brightly colored. The males throat is black and yellow and the females throat is mostly red. Colours and size also differ between the species and even within a species.

The distribution of these lizards and their variations in shape, color and behaviour show the phenomenon of adaptive radiation so typical of the inhabitants of this archipelago. One species occurs on all the central and western islands, which were perhaps connected during periods of lower sea levels, while one species each occurs on six other more peripheral islands.

A common feature in lizards is to change color if they are threatened or if there is a temperature change.

Lava Lizards play an important part in controlling over-populated insect populations such as the Painted Locust. They are predators of invertebrates and will quite often eat each other (cannilbalism). Lava Lizards generally eat plants, particularly during dry spells.

Lava lizard males are especially territorial, staking out a prominent spot on top of a boulder and bobbing their heads up and down to indicate ownership. This so-called ‘push-up’ behaviour becomes pronounced during breeding, which peaks in the warm season.

Males have larger territories which may encompass several belonging to females. Males will mate with all females passing through their territory. Three to six tiny eggs (about the size of a pea) will be laid every month or so. These are laid in deep soil excavations made by the females.

After about 12 months, the eggs hatch and the young emerge. The infants measure about 2 inches long. At this stage, the infants are vulnerable to predators such as birds, snakes and even giant centipedes.

The infants that do survive mature depending on gender. Females mature within 9 months, however, males do not mature for about 3 years.

Like all reptiles, Lava Lizards rely on the sun for their internal heat. Their day begins with basking a warm rock for a half hour or so. Then they are active hunting but retreat to a shady spot during the heat of day.

As temperatures fall again, Lava Lizards become active once more. At night they rest under leaf litter or gravel to protect themselves from the cool of the night.