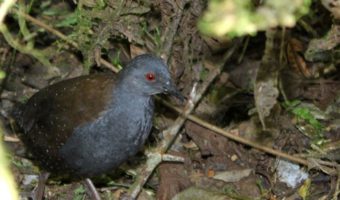 Birds of the family ‘Rallidae’ are called Rails. The Galapagos Rail Bird is a small rail endemic to the Galapagos Islands. It closely resembles the closely related Black Rail of The Americas. It has been threatened by introduced species, such as goats and cats and is considered vulnerable.

The Galapagos Rail Bird is a small (15 centimetres) nearly flightless ground living bird. It has dark plumage, black overall with a greyer head and breast, and white spots on the back. It has a scarlet eye, a black bill, and short, nearly useless wings. They are very vocal with a wide range of calls.

The Galapagos Rail Birds feed on invertebrates, mostly snails, isopods, dragonflies, bugs, ants, also taking berries and some seeds. They feed during the day, moving along the ground tossing leaves and investigating the leaf litter.

The Rail birds body is usually narrow enough to enable them to slip through dense vegetation, such as in the marshes they typically inhabit.

Galapagos Rail Birds ordinarily remain on the ground and are difficult see. They are secretive and sometimes nocturnal in habit. Commonly heard rather than seen, they emit certain calls and squawks characteristic of the species.

These small to medium sized birds have moderate to long legs and long toes, which are an advantage for walking or running over soft ground.

Galapagos Rail Birds often flick their short tails, which are cocked upwards. Rail birds are usually but not always grey in color, they are sometimes brown and dull red. Their plumage usually has a loose texture, and male and female look alike.

Rail Birds beaks range from stubby to elongate, depending on the species. Rails are omnivorous, but many species predominantly eat small animals. The Rail birds nests are generally well hidden and well separated. Clutches often contain 6 to 12 eggs, and both male and female usually participate in incubating them. When hatching, the young are covered by a black or brownish down in most species and leave the nest immediately after hatching.

About 132 species are recognized, some of which are important game birds.

Species of the Galapagos Islands have independently evolved flightlessness.