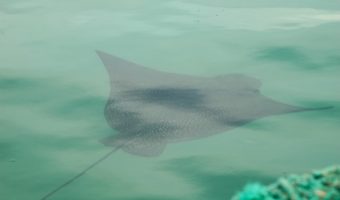 Rays in the Galapagos Islands

Rays, as well as skates and sawfish (Batoidea), are a superorder of generally flat-bodied cartilaginous fishes, containing more than 500 described species in thirteen families. Cartilaginous fishes are jawed fish with paired fins, paired nostrils, scales, two-chambered hearts and skeletons made of cartilage rather than bone. They are divided into two subclasses: Elasmobranchii (sharks, rays and skates) and Holocephali (chimaera, sometimes called ghost sharks).

Animals from this group have a brain weight relative to body size that comes close to that of mammals and is about ten times that of bony fishes.

There are four common species of Rays that can be observed swimming around the Galapagos Islands.

Take a look at these amazing, intelligent mammals that live and pass through the cold waters of the Galapagos Islands: 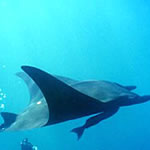 The Manta Ray or Giant Manta (Manta birostris), is the largest of the rays. Mantas have been given a variety of common names, including Atlantic manta, Pacific manta, devil ray and devilfish. Some just call all members of the family ‘Myliobatidae’, stingrays. The largest of these rays was known to measure 13 feet across its pectoral fins (or ‘wings’) and weighed in at 3,000 kilograms (6,600 pounds).

With their large lobes, long mouths and long thin tails the Manta Rays swim amazingly graceful through the waters.

Manta Rays are ‘filter feeders’ (animals that feed by straining suspended matter and food particles from water) and feed on plankton and fish larvae near to the surface of the water, making visual sightings from boats quite common. The food is filtered from the water passing through their gills as they swim. The small prey organisms are caught on flat horizontal plates of spongy tissue, that span the spaces between the manta’s gill bars.

In Galapagos, The Manta Rays can often be seen from the cliffs at South Plaza Island or even from the beach shore on Rabida Island.

Manta Rays have a diamond shaped body which helps then swim gracefully through the water using their pectoral fins as ‘wings’.

Manta Rays are most commonly black on the top of their bodies and white on their underparts, however, some have blue coloring on their backs. A giant mantas eyes are located at the base of the cephalic lobes on each side of the head.

The Manta Ray has distinctive ‘horns’ from which the common name ‘devil ray’ stems. They are located on either side of its broad head. The unique structure of these horns is actually derived from the pectoral fins. During embryonic development, part of the pectoral fin breaks away and moves forward, surrounding the mouth. This gives the Manta ray the distinction of being the only jawed vertebrate to have novel limbs.

Their horns are very flexible and are used to direct plankton, small fish and water into the Mantas very broad and wide mouth. The manta can curl them up to reduce drag while swimming.

The Manta Ray is a prized sighting by enthusiastic divers. Mantas are extremely curious around humans and are fond of swimming with scuba divers. They will often surface to investigate boats (without engines running) and reportedly enjoy being stroked. They have the biggest brains of any fish. Mantas are known to breach (leap out of) the water into the air as they swim.

The predators of the Manta ray include mainly large sharks, however in some cases orca/killer whales have also been observed preying on them.

Golden Rays (Rhinoptera steindachneri, raya dorada) range in size, but they are usually between a half-metre to a metre across the wings. They are named for their golden-colored tops, but they can also be recognized by their blunt heads and long, whip-like tail.

Golden Rays are often seen in the diving sites swimming alone, they also swim in large schools in quiet lagoons. The best place to see schools of golden rays is at Black Turtle Cove on Santa Cruz island.

Spotted Eagle Rays have pointed heads, long tails with a spiny termination and a wingspan ranging from one to two metres, but their most distinguishing feature is the array of white spots that covers their black tops. They are also occasionally seen snorkeling at Turtle Island or off the coast at Floreana Island.

They are grey in color with a flat body and long, narrow tail, which has the nasty stinger at its base. The size and shape of stingrays can vary very much. They can appear small and angular like the ‘diamond stingray’ to the larger (up to two metre wingspan), circular like the ‘marbled’ stingray.

You can spot stingrays lurking on the sea floor of some shallower snorkel sites or hiding out in the surf at Punta Cormorant and/or Post Office Bay, Floreana Island.