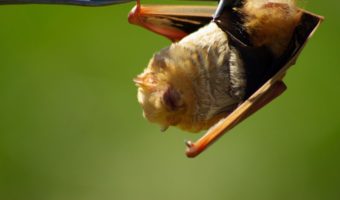 The Red Bat, (Lasiurus blossevillii), also known as the eastern red bat, is one of many species of bats. This particular one is from the Vespertilionidae family which is the largest family, and includes 35 genera and 318 species. The red bat belongs to the genus Lasiurus and the order Chiroptera.

The red bat has been found around parts of South America. These bats are similar to birds. They migrate to the southern parts of the world when it gets cold and head north when the weather starts to warm up in northern hemispheres of the world.

The bats will most likely be found in the forest roosting under leaves. They do this because they are either trying to eat or hide from predators. The bats hang upside down from a tree branch from one foot because they are trying to blend in with their surroundings, such as dead leaves.

Red bats are secure over most of their range and are not considered threatened. They are listed as Least Concern on the IUCN Red List. 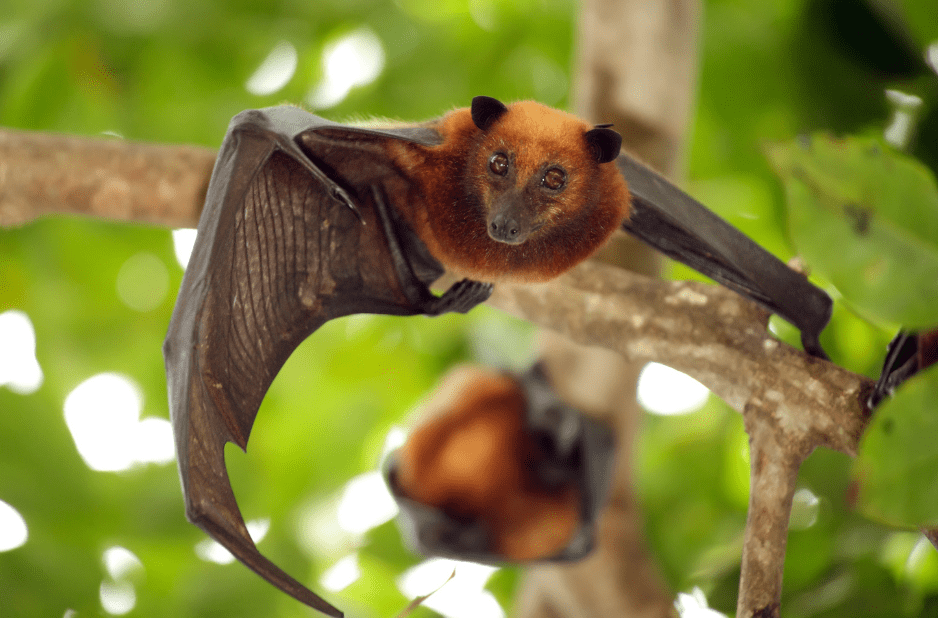 This species gets its name because of its distinctive fur color. Males are brick or rusty red, and females have a slightly more frosted shade of red. Many of the hairs are tipped with white. Both sexes have shoulder patches of white fur. Individual hairs on its back are approximately 5.8 mm (0.23 in), while hairs on its uropatagium are 2.6 mm (0.10 in) long. Fur on its ventral surface is usually lighter in color. Its entire body is densely furred, including its uropatagium.

These bats have an average lifespan of around two years, although it is thought they could live longer.

The red bat is insectivorous, and eats a variety of insects. They eat moths, flies, true bugs, beetles and cicadas. Insects may be caught in the wing or tail membrane during flight and eaten “on the wing.” They attack flying insects every thirty seconds, on average. If a bat is stalking a moth using echolocation the moth can hear this and will try to flee the attack by diving. 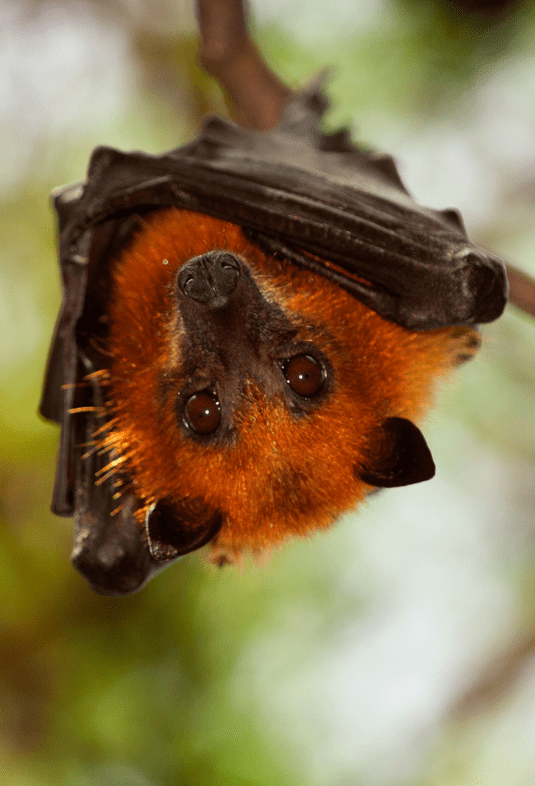 Normally the red bat does not come out during the day, they are called nocturnal. Therefore, they come out during the night and hunt. However, it is not uncommon to see them flying early in the afternoon during summer and in daylight on warm winter days.

They do not use their eyes to hunt, but use echolocation to locate prey. They use their voices to make echoes and the echoes help them make pictures in their minds about what is around. They forage along forest edges, and flyway corridors of streams and woods roads. They hunt within 500 m of a light source, and have been found in insect light traps. They can also be seen dipping and diving around streetlights.

Red bats roost in the foliage of deciduous trees, often hanging by one foot, and look, superficially, like dead leaves. Red bats are solitary when roosting, but small groups of individuals often forage together.

When red bats hibernate they choose hollow trees, usually 2 to 40 feet off the ground. They maintain body temperatures just above freezing and cannot withstand prolonged periods of below freezing temperatures. They may be visible hanging from branches or leaves but their coloration helps to camouflage them from predators.

Red bats mate during August and September, often during flight, but embryo implantation is delayed until spring. Multiple males can sire a single litter, and the female red bat can have one to four pups at a time, which is many more than other bat species. The gestation period is about 90 days. Female bats have four nipples, which allows them to nourish multiple offspring at once.

Newborn bats are hairless and weigh approximately 1.5 g. Before the bats are able to fly the mother can carry up to four pups at a time, too. It takes up to six weeks for the bats to fly by themselves and one to three years to mature.

Red bats are widely distributed in forested regions in eastern North America and Bermuda, and occur from southern Canada through Central America and into Chile and Argentina. Red bats are one of the most common bats in the state of Alabama. They migrate to warmer regions during winter. Unlike the closely related hoary bat, males and females have the same geographic range throughout the year.

They prefer elm, box elder, wild plum, willow, hawthorn, sumac, and a variety of other woody plants for roosting, and hibernate in woodpecker holes, tree foliage, and under loose bark. They tend to choose habitats that are sparsely to moderately populated by humans and are rare in heavily urbanized areas.

Red bats are migratory, arriving in the northern climates in mid-April and leaving in late October. Male and female red bats have different migrating routines. Female bats are usually found in warmer climates during the month of June. Males are mostly found in the Appalachian Highlands. Due to the difference in migrating patterns, it makes it difficult for them to breed because they are constantly quite far apart. 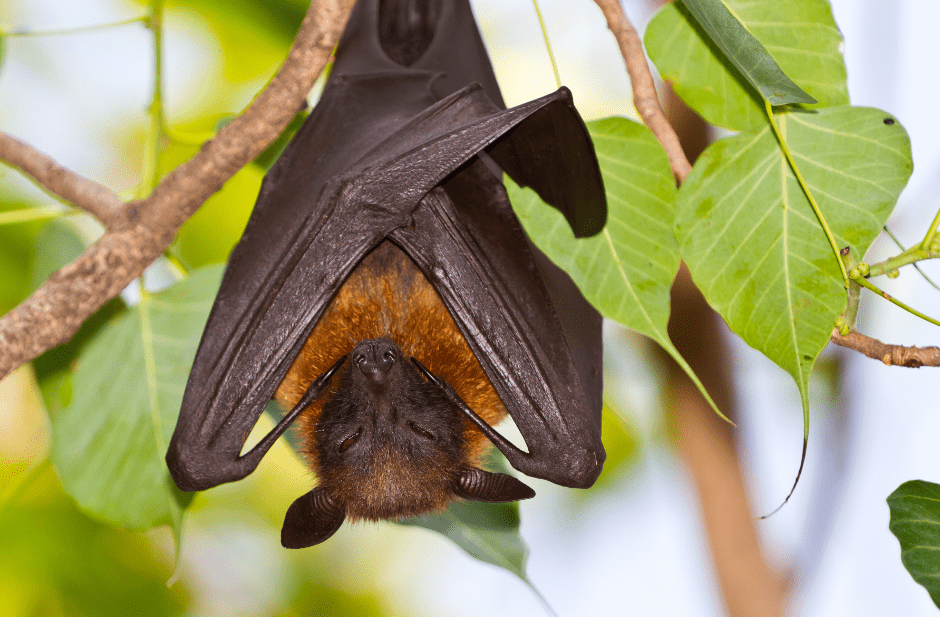 Red bats are not considered threatened and are listed by the IUCN Red List as Least Concern.

The biggest threats to these bats are humans. Eastern red bats, just like other tree bats, are killed by flying into cars, tall human-made structures, or wind turbines.

Some people view red bats, along with all other bats, as vermin, although they rarely invade homes. They play an important role in the ecosystem by eating insects.

They bats can also carry many harmful viruses, disease and even rabies. These could be fatal to the human health. For humans, be aware of any abnormal behaviours a bat might have. When they are on the ground and can not move, do not touch them or try to help them. Red bats are liable to bite and cause infections. If a person comes into contact with one and is bitten, this person needs to seek medical attention as soon as possible.

Red bats are mostly preyed on by birds of prey, such as hawks and owls, and opossums.