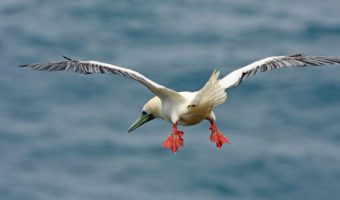 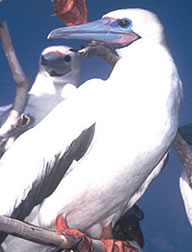 Genovesa island is a formation of submerged edges of a crater.

Known as ‘the bird island’, it is the best place to see a Red-footed Booby colony and it also provides great opportunity to visit other bird colonies, such as: Masked boobies, Frigate birds, Swallow-tailed Gulls, Red-billed tropicbirds, Galapagos doves, Short-eared Owls,White Cheeked Pintail ducks and many more.

The Red-footed Booby bird is the smallest of the booby birds at 71 centimetres in length and a 137 centimetre wingspan. It has red legs and the bill and throat pouch are colored pink and blue.

The Red-footed Booby bird has two plumage forms. The white phase is basically white with black on the flight feathers. The brown form is brown with a white belly rump and tail. Both forms may occur together, as in the breeding colony on St. Giles Island, Tobago. Few seabirds display such a variety of color phases. Legs and feet are red and their beaks are pale blue. Below you can view a short video of the Red Footed Booby Bird.

The Red-footed Booby bird breeds on islands and coasts in tropical oceans. It winters at sea and is therefore rarely seen away from the breeding colonies.

The Red-footed Booby bird nests in large colonies, laying one chalky blue egg in a stick nest in a tree, which is incubated by both adults for 44 – 46 days. It may be 3 months before the young first fly and 5 months before they make extensive flights.

Red-footed Booby pairs may remain together over several seasons. They perform elaborate greeting rituals, including harsh squawks and the males display of his blue throat.

The Red-footed Boobies of the Galapagos Midway island are a white color morph. Adult birds have white body and tail plumage. Upperwings have black primary and greater secondary coverts. About 444 pairs nest on Eastern Island.

The Red-footed Booby birds feed by diving vertically into the water and rarely within sight of land. They can dive up to 30 metres to pursue their prey. They feed primarily on flying fish and squid. They either feed on their own or within a mixed species flock. They search for their food anytime during the day and after dark. Red-footed Boobies are specialized in catching flying fish. They dive while skimming at the surface of the ocean and they do it far from shore. For that reason sometimes they need the whole day or even more in their fishing raids and their chicks have therefore to fast in the nest until their parents return with food.

Colonial in nature, the Red-footed Booby differs from the other Boobies by making their nests in small trees and shrubs. Colonies can be found on Tower, Culpepper, Wenman, Gardener-near Floreana, Pinta and Isla Pitt. They are rarely seen in areas other than where they breed. Eggs can be found throughout the year with colonies hatching at the same times.

The voice of the Red-footed Boobies is like that in the other booby birds. However both the whistle and the honk come accompanied by an inflexion that sounds like a grunt. Besides this, red boobies come in two different morphotypes; the brown and dominant and the white recessive. These morphotypes make them look very special in the sense of beauty. Is important to remember that in spite of the great apparent difference they show, both colors are from the exact species of Boobie. They are not different species.