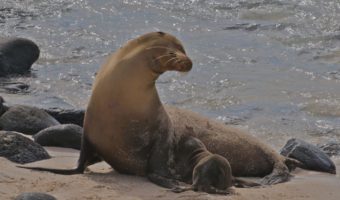 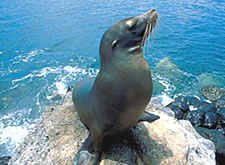 The Galápagos Sea Lion (Zalophus wollebaeki) is a species of mammal in the Otariidae family. It is endemic to Galapagos. Colonies of the Galapagos sea lions are found on most gently-sloping rocky shores and beaches on the islands. There are about 50,000 sea lions in the islands.

The males, known as ‘Bulls’ are the head of the colonies. They are larger than the females and can grow to measure 7 feet (2 metres) in length and weigh up to 800 pounds (363 kilograms). As the males grow larger, they begin to fight for dominance over territories including a ‘Harem’ which may contain between 5 and 25 female Sea Lions (Cows). Sea Lions are very territorial and will fight off any intruders that may enter their territory. 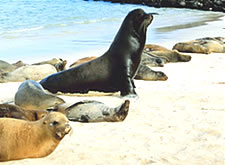 Each female (cow) in a Harem gives birth to a single pup a year after mating.

The sea lion pups have a very strong bond with their mother.

A single pup will be nurtured by its mother for up to 3 years following its birth.

During the development of the bond, the cow and pup will learn to recongnise each others bark and be able to distinguish it from the rest of the colony. While the cow is nursing her pup, she will take it with her into the waters. When the pup is 2 – 3 weeks old, the cow will mate again.

Within the Colony Sea Lion Pups live together in a ‘Rookery’ (like a nursery). Pups can be seen together napping, feeding and playing together. It is common to see one Cow caring for a group of Pups while the other cows go off into the waters to feed.

Galapagos Sea Lions are especially vulnerable to human activity. Their inquisitive and social nature makes them more likely to approach areas inhabited by humans and to come in contact with human waste, fishing nets and hooks.

Sea Lions can be seen all over the islands. Snorkeling and kayaking with the playful pups is often the highlight of a visit to the Galapagos Islands.