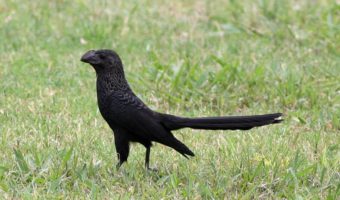 The Smooth-billed Ani (Crotophaga ani) is a large near-passerine bird in the cuckoo family. It is a resident breeding species from southern Florida, the West Indies, Costa Rica, Trinidad and Tobago, south to western Ecuador, Brazil and northern Argentina.

The Smooth-billed Ani has proved to have an exceptional capacity for adaptation in a new environment. The first report of their presence was made in the 1960’s. By the middle of the 1980’s they were widely distributed on the southern part of Isabela Island on Galapagos. Today they are almost all around the archipelago.

The Smooth-billed Ani is found in open and semi-open country and cultivation. The nest, built communally by several pairs, is a deep cup lined with leaves and placed usually 2 – 6 metres high in a tree. A number of females lay their chalky blue eggs in the nest and then share incubation and feeding.

Each female is capable of laying up to 7 eggs and nests have been found containing up to 29 eggs, but it is rare for more than ten to hatch. Incubation is 13 – 15 days, with another 10 days to fledging. Up to three broods may be raised in a season, with the young of earlier broods helping to feed more recent chicks. 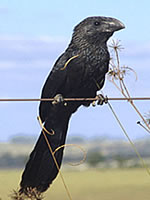 The calls include a ‘whining ooo-leeek’. The Greater Ani feeds on termites, large insects and even lizards and frogs.

The Smooth-billed Ani will occasionally remove ticks and other parasites from grazing animals. There are records of several of these birds ravaging into finch nests for either the eggs or the chicks.

Ten years ago it was difficult to get close to the Smooth-billed Ani but as mention previously they have adapted efficiently and today it is possible to get a good close up picture of them without having to use a sophisticated camera.

This common and conspicuous species has greatly benefited from deforestation.

This species is called ‘El pijul’ in the Venzuelan folklore. It is mentioned in the popular Venezuelan song ‘Son Jarocho’.