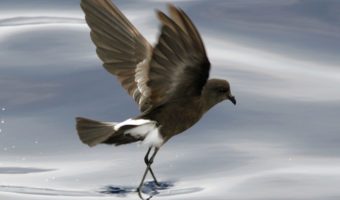 The Storm Petrel birds are seabirds in the family Hydrobatidae, part of the order Procellariiformes.

Storm Petrels were called ‘Mother Carey’s Chickens‘ for a long time by sailors.

These smallest of seabirds feed on planktonic crustaceans and small fish picked from the surface, typically while hovering. The flight is fluttering and sometimes bat-like.

Storm Petrels have a cosmopolitan distribution, being found in all oceans. They are strictly pelagic, coming to land only when breeding. In the case of most species, little is known of their behaviour and distribution at sea, where they can be hard to find and harder to identify. Storm Petrels are colonial nesters, displaying strong philopatry (the tendency of a migrating animal to return to a specific location in order to breed or feed) to their natal colonies and nesting sites.

Storm Petrels nest in crevices or burrows and all but one species attends the breeding colonies nocturnaly. Pairs form long term monogamous bonds (having only one mate in a relationship) and share incubation and chick feeding duties. Like many species of seabird nesting is highly protracted with incubation taking up to 50 days and fledging another 70 days after that.

In the Galapagos, there are three resident species:

Out of the three species, the ‘Oceanites’ are the southern form while ‘Oceanodroma’ are the northern form. Both the white-vented storm petrel and the wedge-rumped storm petrel are endemic Galapagos subspecies. Other species of storm petrels have occasionally been reported as vagrants.

The Oceanodroma have a well known breeding site on Galapagos. This is the Prince Philip’s Steps on the island of Genovesa. At this site, the birds nest in lava tubes and fly back and forth like swarms of insects,

Several species of storm petrel bird are threatened by human activities. One species, the Guadalupe Storm-petrel is thought to have gone extinct, another presumed extinct species was rediscovered in 2003. The main threats are introduced species in their breeding colony. Many storm petrels habitually nest on isolated mammal free islands and are unable to cope with predators like rats and feral cats.