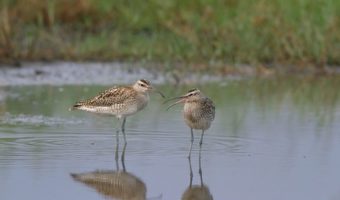 The Whimbrel (Numenius phaeopus), is a wader in the large family Scolopacidae. It is the one of the most widespread of the curlews, breeding across much of subarctic North America, Europe and Asia as far south as Scotland.

This is a migratory species wintering on coasts in Africa, South America, south Asia into Australasia and southern North America. It is also a coastal bird during migration. The Whimbrel is fairly gregarious outside the breeding season. It breeds on Arctic Tundra. In migration, it can be found in a wide variety of habitats, including mudflats, sandy beaches, rocky coastlines, salt marshes and flooded agricultural fields. 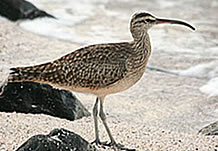 The whimbrel (Numenius phaeopus) is a large and long-legged shorebird, with a long, decurved bill. It belongs to the sandpiper, Scolopacidae, family and is one of the most widespread of the curlews, breeding in Alaska and in arctic regions of Canada and Greenland.

A migratory bird, the whimbrel winters on the coast of South and North America and tends to concentrate in flocks. The name “Whimbrel” originates from England and was given to the bird as a loose interpretation of the bird’s call.

In this article we’re going to take a look at the Whimbrel in more depth, exploring this bird’s behavior, habitat and conservation. If you’re interested in learning more, keep reading on.

The whimbrel has a distinct head pattern, with dark-and-light alternating stripes. Its color does not vary season to season and in flight, it appears brown all over, with a white belly. Its bill is solid black in summer and has a pinkish or reddish base during winter. Whimbrel birds also have a narrow dark eyeline. It also has a relatively long neck and their wings are pointed and short.

There are five subspecies of whimbrel:

* The Numenius phaeopus hudsonicus sub species, now known as The Nearctic Taxon is now considered to be a destinct species by the IOC (International Ornithologists’ Committee).

A whimbrel usually lives for around ten years. However, the oldest recorded whimbrel lived to the age of 24!

The whimbrels diet includes insects, crustaceans and berries. They use their long bills to probe into mudflats or wet sand for invertebrates such as crabs, particularly mud crabs, crayfish, mole crabs, small fish, marine worms, sea cucumbers, sand shrimp, and small mollusks. The shape of the Whimbrel’s bill matches the curve of the crab’s burrow. Interestingly, a whimbrel will usually wash a crab before eating it to remove mud, and removes the largest claw first.

On breeding grounds, whimbrels eat berries left over from the previous summer, and these same berries become a very important part of their diet before they migrate. Throughout the year whimbrels also eat spiders, grasshoppers, flies and beetles.

Whimbrel birds maintain their feeding territories on wintering grounds and in migratory stopovers, and will defend if another whimbrel gets too close. 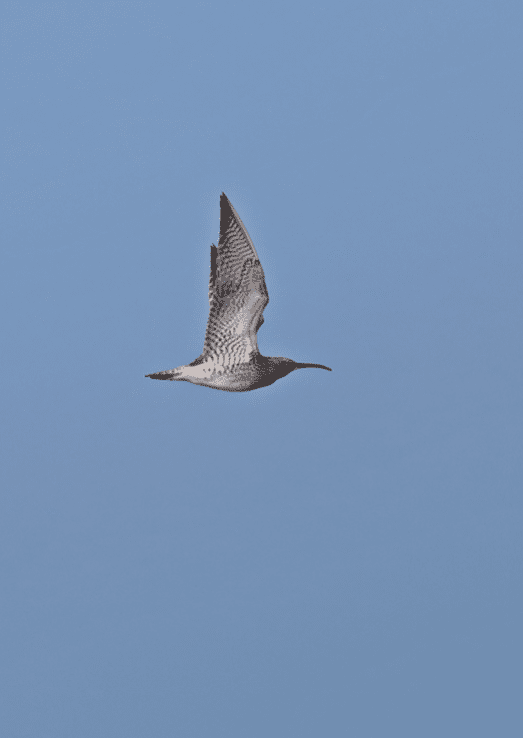 Whimbrel birds are monogamous animals. The male performs dramatic flight displays over nesting territory, flying in large circles, alternately fluttering as high as 1,000 feet and gliding down, while giving whistling and bubbling song to attract females. Courting males also chase females on foot and in flight.

Receptive females respond to the male by drooping their wings, cocking their tail, and leaning forward. Pairs may also perform alternating displays involving a raised tail and lowered breast. They maintain their bond with trilling calls during incubation duties, too.

Whimbrel birds often return to the same area to nest with the same mate in successive seasons. They usually have a territory which they share with a few other pairs, which can vary in size from 12 acres to over 90 acres. They are very territorial animals but tolerate neighbors, as long as they don’t cross into their area. Once the eggs are hatched, their territorial defense lessens.

In breeding season, whimbrel birds usually nest on raised sites and in an area protected from the wind, such as near a shrub. Their nests are simple bowls that are pressed into the ground, then lined with leaves, grass and moss and measure about 5.6 inches across and 1.5 inches deep. The female usually builds the nesting area.

A whimbrel’s incubation period is between 22-28 days and between three to five eggs are laid. The eggs are blue-green to brown in color and both parents will help incubate the eggs. The downy young leave the nest soon after hatching, around one to two hours, and feed themselves.

Males use dramatic flight displays and songs to attract females for mating. Both parents are very protective of their young and will attack any humans that come too close. Males sing and display on and above nesting territories, often calling loudly when they spot predators or intruders. The female generally leaves the brood first, and the male stays with the young until they can fly, at around 4-6 weeks.

The preferred habitats of the these large shorebirds include tundra, salt marshes, prairies, shorelines, and mud flats, particularly when they are feeding. When not feeding, whimbrels also live in meadows, fields, dunes, and oyster beds, as well as mangrove trees.

They are found to nest in much of Alaska and in arctic regions of Canada and Greenland, but migrate to the Atlantic Coast of North America. The whimbrel spends winters in Africa, southern coast of North America from California south through Mexico, the West Indies, South America, and south Asia.

Adult whimbrels leave the nesting grounds in July and the young from the year leave around a month later. They are usually found inland during the migration period, although they spend their winters on the coast, as mentioned above. In March through May, they begin to travel northward again.

Some of these migrating birds make a nonstop flight of 2,500 miles from southern Canada or New England to South America.

Whimbrel birds both migrate and roost in flocks, often accompanied by smaller bird species. A group of sandpipers has many collective nouns, including a “bind”, “contradiction”, “fling”, “hill”, and “time-step” of sandpipers. 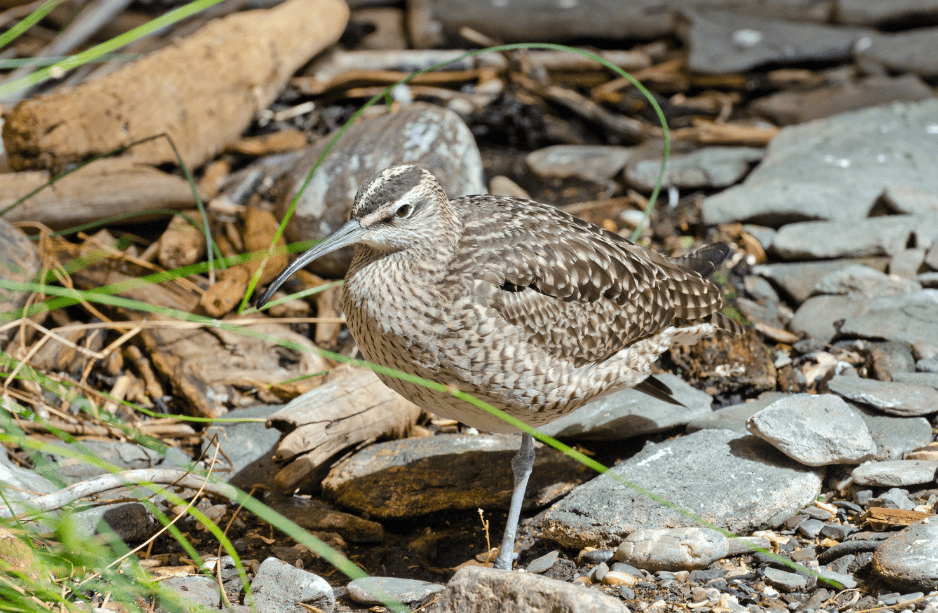 There is actually little known about the whimbrel population, which is due to the fact that they nest in remote areas. However, it is thought that their global population is around 1.8 million, and the conservation concern is relatively low. They have a widespread range and can be found on the coasts of six continents in the winter.

Throughout the early twentieth century, whimbrels were heavily hunted in North America for food. There was a ban put on hunting in North America which has helped with repopulation, but they are still hunted today in parts of South America and the Caribbean. Aside from hunting, a big threat to the whimbrel is the destruction of coastal wetland habitats and rising sea levels.