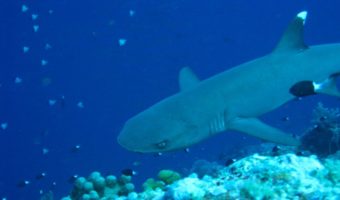 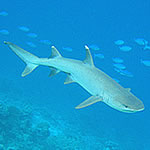 The white tipped reef shark (Triaenodon obesus), is a requiem shark of the family Carcharhinidae, the only member of the genus ‘Triaenodon’.

White Tipped Reef sharks have rounded snouts and are more common throughout Galapagos than the other species.

The white tipped reef shark is one of the most common sharks found in shallow tropical and warm temperate water around coral reefs in the Indian and Pacific oceans. It occurs at depths down to 330 metres.

These are slender sharks with the tips of the first dorsal fin and upper caudal fin being white, hence its name. The upper body is grey/brownish. Their average length is about 140 to 160 centimetres and the maximum reported length is 244 centimetres. Its head is broad and flat.

The white tipped reef sharks have small smooth-edged teeth with strong cusplets in both jaws.

The white tipped reef shark has an undulating swimming pattern and is capable of resting motionless on the bottom for long periods of time.

This bottom dwelling shark is nocturnal and is often seen resting on the bottom during the day, sometimes in small groups. It is not aggressive and will generally swim away if disturbed, although it may bite if harassed. At night it hunts among crevices in the reef.

Reproduction is viviparous (the embryo develops inside the body of the mother, as opposed to outside in an egg), with 1 to 5 pups in a litter.

The gestation period is at least 5 months. The sharks size at birth ranges from 50 to 60 centimetres. It is estimated that this shark can live for about 25 years and it reaches maturity after about 5 years.